Discuss the alleged Nazi genocide or other wartime atrocities without fear of censorship. No bullying of fellow posters is allowed at RODOH. If you can't be civil, please address the argument and not the participants. Do not use disparaging alterations of the user-names of other RODOH posters or their family members. Failure to heed warnings from Moderators will result in a 24 hour ban (or longer if necessary).
Post Reply
750 posts

Here's a little bon mot that I missed. From The Jewish Man:

My username is The Jewish Man, not just ‘Jew’.

Why are you uncomfortable with my calling you a Jew? I thought that you said that you weren't ashamed of being a Jew?
Top

Turnagain wrote: ↑
Sun May 24, 2020 2:52 am
Why are you uncomfortable with my calling you a Jew? I thought that you said that you weren't ashamed of being a Jew?

Lupus had the same issue as he felt it was a pejorative; however, Scott was right there was no need to constantly "out" der Jude when he or she publicly identified as one. It is probable that all of those exposing their ethno-belief system are really the same person e.g Marxist Jew, Aryan Jew, ZionistLoverJew, including others with Kike names.

Deutsch: der jüdische Mann. Like most Juden he is using the alleged holocaust to prop up his belief wrapped around ethnicity like Nori around sushi.

The Jew is immunized against all dangers: one may call him a scoundrel, parasite, swindler, profiteer, it all runs off him like water off a raincoat. But call him a Jew and you will be astonished at how he recoils, how injured he is, how he suddenly shrinks back: “I’ve been found out.”...Joseph Goebbels
This is probably the case with this one. TjM has done his research on Google finding the information in Wiki; it seems he or she is not interested in discussing issues or even reflecting on his own belief system; the belief in the H and the religion are now intertwined inextricably. The H is now self identify. However, he or she may wish to explain which parts of Treblinka are true, just the gassings or the lobstering and vacuum chambers. 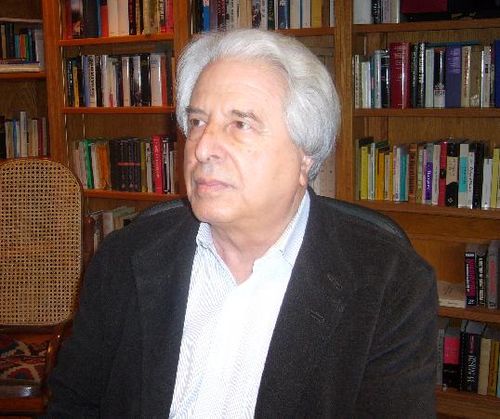 Jude Friedlander
Friedländer served as secretary to Nachum Goldman, then President of the World Zionist Organization and the World Jewish Congress.
I doubt if his work is anything but totally biased. Friedländer sees Nationalsozialismus as the negation of all life and a type of death cult. He argues that the Holocaust was such a horrific event that it is almost impossible to express in normal language. Friedländer sees the anti-semitism of the NSDAP as unique in history, since he maintains that Nationalsozialist antisemitism was distinctive for being "redemptive anti-semitism", namely a form of anti-semitism that could explain all in the world and offer a form of "redemption" for the anti-semite. It would seem that the new poster follows this line of reasoning. Friedländer is Internationale Juden, with about as much credibility as Samuel Untermyer the forger of statistics. Thank you TjM but this has nothing to do with Treblinka. The line of reasoning of Jude Friedländer could be discussed in another thread.

I wasn't particularly "outing the Jew" when I called The Jewish Man the Jew. I often write the names of posters in a more abbreviated form. I usually refer to you as "Hunt" rather than spelling out your entire name. I do though, usually use the full name as a preface to a quote which I did for the Jew. What the hell, he claims to not only be a Jew but proud of it. Why is he pissing and moaning about me referring to him as the Jew? It would seem that, at least for The Jewish Mann, Goebbels observation about how a Jew reacts to being called a Jew is still true.
Top

So far der Jüdische Mann has not said much about the AR camps, or the status of Treblinka; to me this is just stating what he or she has thought. I thought it was sounding the forum out but the quotes from the Israeli professor really shows the thoughts. In this forum unless the poster speaks of Treblinka then it is best to ignore it Türn.

How do they know their relatives were “lost” at Treblinka? What evidence do they have for that?

They were sent to Treblinka and never seen again. The gassing of Jews at Treblinka.
What do you think happened to them? Did they go to the moon or something?

This is another answer that makes me think you are not serious and are a deceitful, time-wasting sock-puppet.

I asked you what evidence they have for that?

I have been asking for evidence TII was something other than a transit camp for years now. Nothing has been produced.

Nessie wrote: ↑
Sun May 24, 2020 8:58 am
Nothing has been produced.
By your own standard, that makes you a time wasting, deceitful sock puppet.

I normally do not reply to this Jude Troll. It should try and read all the posts. Much has been produced. We know who is the sock,but that is off topic.

Turnagain wrote: ↑
Sun May 24, 2020 2:07 am
The Jew Man links to three propaganda sites and calls it "evidence". He also recommends that I read a book of his choosing. IOW, what we have going here is a Jew's weasel dodge. The Jew has no evidence. This is akin to me telling the Jew to go read the VHO series of books. Like, read Mattogno and Graf, "Treblinka". Let's see some of what you call evidence or giddoutahere, Jew.

You’re just going to dismiss anything as propaganda because it is contrary to the conspiracy theory that the Holocaust was a hoax which you allegedly believe for whatever reason.

IOW, you can't produce any evidence for your holyhoax so you try to weasel dodge. So it goes in holyhoax la-la land.

I’ve linked you to several websites showing the evidence that the Holocaust happened.

The fact that you’re not going to bother to read any of the material and instead just keep posting that the Holocaust was a hoax is your problem.
Top

Turnagain wrote: ↑
Sun May 24, 2020 2:07 am
The Jew Man links to three propaganda sites and calls it "evidence". He also recommends that I read a book of his choosing. IOW, what we have going here is a Jew's weasel dodge. The Jew has no evidence. This is akin to me telling the Jew to go read the VHO series of books. Like, read Mattogno and Graf, "Treblinka". Let's see some of what you call evidence or giddoutahere, Jew.

Deniers are asked for evidence. They are linked to basic sites that themselves link to the evidence itself and explain what the evidence concludes. But that evidence does not suit the denier preferred, unevidenced narrative. So, it is dismissed.

You have been repeatedly shown witness, physical, documentary, forensic, archaeological and supporting evidence of what happened inside TII. It corroborates that the camp was used for gassings.

The Jewish Man wrote: ↑
Sun May 24, 2020 9:04 am
I’ve linked you to several websites showing the evidence that the Holocaust happened.