Discuss the alleged Nazi genocide or other wartime atrocities without fear of censorship. No bullying of fellow posters is allowed at RODOH. If you can't be civil, please address the argument and not the participants. Do not use disparaging alterations of the user-names of other RODOH posters or their family members. Failure to heed warnings from Moderators will result in a 24 hour ban (or longer if necessary).
Post Reply
275 posts

Charles Traynor wrote: ↑
Sun Dec 03, 2017 4:13 pm
The nervous tension of waiting for their heroine's demise seems to be getting to our True Believers. Don't worry, DP, the axe will be falling on Kitty's hate filled lies sooner rather than later.

Please give me advance notice, otherwise the shock of receiving such news may lead to irreparable psychological damage.


Charles Traynor wrote: ↑
Sun Dec 03, 2017 4:13 pm
Tomorrow if I have time I may discuss some of Kitty's lies concerning her time at Zabia Wola.

Who with ? Your psychiatrist ?
All I want for Christmas is a Dukla Prague away kit
Top

Will this nightmare never end? Two years on and child abuser Sophie Shad is still entering our schools and brainwashing our children with her vile propaganda film. 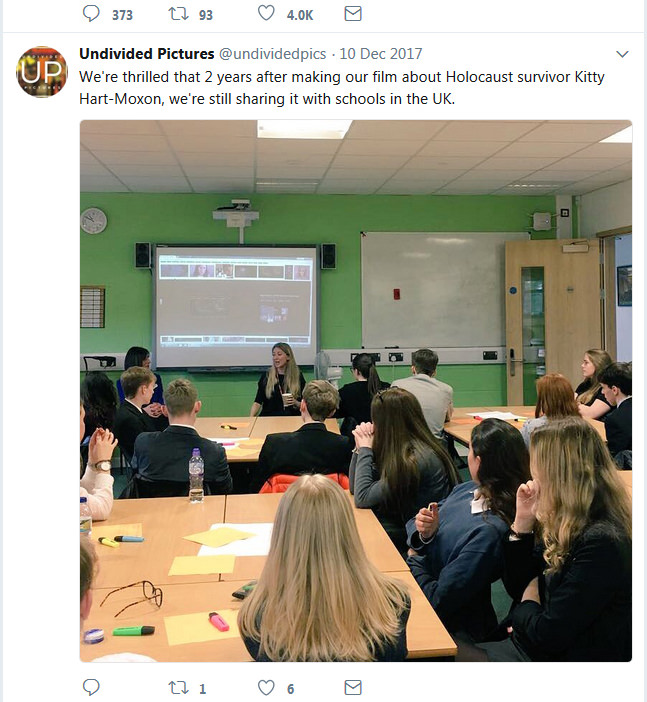 DasPrussian and NexGen will no doubt be pleased to hear I am slowly working my way through a treasure trove of information on Kitty Hart-Moxon which I previously hadn't had time to look at. 2018 is very definitely not going to be a good year for KHM.
Kitty Hart-Moxon (1998): "Believe me, I came into Auschwitz in a much worse condition than I actually left it."
Top

I thought it was all gonna kick off in 2017 ? (I can't be arsed to find the original quote where you promised this )
All I want for Christmas is a Dukla Prague away kit
Top

Kitty and her supporters don't yet know it but 2016 will actually mark the beginning of her downfall.


I now have the complete set of Kitty's early lie filled books. Poor Duke and DasPrussian. They've been in denial but I think it is finally dawning on them 2017 is the summer Kitty is finally exposed for the monster she truly is.

So now we enter 2018 and all we hear is more of the same. I cannot help but think he is just waiting until she snuffs it before he unleashes his 'expose' . Obviously the benefit of doing it this way means he wont get sued for slander, lying and defamation of character . Also, as he knows I only live a bus journey from her abode , and if he publishes now while she is still alive he will be shitting himself I will hop on the number 11 bus to Kings Heath and show her what he has written.
All I want for Christmas is a Dukla Prague away kit
Top

DP, there's no easy way for me to break this to you. Kitty Hart Moxon left Brum many, many years ago, to be close to family. I'm truly sorry you had to learn this on a public forum.

Kitty relocated to Harpenden, Hertfordshire. I have withheld the name of Kitty's street because she is an old woman and the last thing she probably wants are hordes of loud, selfie-taking fans hanging around outside her house day and night (Imogen Dalziel comes immediately to mind). Kitty lives at No2, for those in the know who may doubt the full scope of my Intel.

I also withheld kitty's full home address for more serious reasons. True Believers have a well documented history of carrying out violent attacks on those who they feel have disrespected their perverse religion. Although KHM understands the holocaust is a Hoax because she was actually a major player in helping to create its popular modern form with her many lies, books and television programmes, she is ironically in real danger from the very people she helped to brainwash.

Here at RODOH we already know KHM is a twisted fantasist who has profited financially from many decades of lying about witnessing her coreligionists going to horrific deaths in the mythical gas chambers of Auschwitz. Unfortunately for Kitty this will come as a great shock to many who have worshipped her every word as though it were religious tract. The recent revelations about her plagiarism are slowly but surely beginning to seep out of the small Holohoax enthusiast community into the rest of the Internet. By the end of the first half of this year I guarantee this almost silent trickle will have become a roaring white water deluge. Kitty will then be in big trouble with the Jewish community who will want her blood because she allowed herself to be caught out lying.


Kitty's local is The Oak Tree, Harpenden. DasPrussian would know this if he were not a Hasbara activist and troll probably domicile in Crown Heights, Brooklyn. No doubt if I had spent the last few years stalking her , like you obviously have done judging by the contents of your response above , then my knowledge of her exact whereabouts would have been more up to date.

As for your 'day of reckoning', no-one really gives a fuck if the truth be told.
All I want for Christmas is a Dukla Prague away kit
Top

Like it or lump it, DP. I am the worlds leading authority on Kitty Hart Moxon and her Holohoax lies.

Thank you for that candid admission you are a troll with no interest in discovering the truth in history.
Kitty Hart-Moxon (1998): "Believe me, I came into Auschwitz in a much worse condition than I actually left it."
Top
Post Reply
275 posts