The RODOH Lounge is a place for general discussion, preferably non-Holocaust. The Lounge is only lightly moderated but please keep this a friendly place to chat with and get to know your fellow board participants.
Post Reply
33 posts

Perhaps I'm an idiot for assuming that Mike Judge and Ethan Cohen created the term 'idiocracy', but at least I don't waste my time and yours producing shitty films. Am I an idiot to assume that Judge and Cohen voted for Biden?

Let's start documenting the real-time "idiocracy" without jumping 500 years into the future in some lame attempt to avoid discussing contemporary America.

'Hundreds of activists rally against ‘white supremacy’ after a black man stabbed an Asian man in NYC.'

For those of you not familiar with "Idiocracy"...

When Idiocracy came out in 2006, it bombed. Frightened of angering advertisers who were ridiculed in the film, Fox suppressed the movie’s release, and it grossed less than a million dollars. But Mike Judge’s satire on civilizational and genetic decay has become more popular every year, mainly because, to many, its predictions are coming true right in front of us.

Judge and Cohen, what a pair of idiots. The irony here borders on tragic. While America was kicking the shit out of people that had absolutely nothing to do with 9/11, coupled with an archetypal smarminess of "meh...shit happens..." upon the revelation that Iraq possessed no WMD's. A couple of wannabe artists are busying themselves with a dystopian 'comedy' concerning America's future.
Top

'Hundreds of activists rally against ‘white supremacy’ after a black man stabbed an Asian man in NYC.'

White people are now about 60% of the population of the US and are considered to be the biggest threat to "democracy" and social stability. "Affirmative Action" has given preference to minority hires in all levels of government and most corporations. Here are some quotes from those who advocated the Hart/Celler Immigration Reform Act of 1965. That was the act that opened the US to immigration from the world wide population.

White people are now about 60% of the population of the US and are considered to be the biggest threat to "democracy" and social stability.

Originally ‘white people” were 0% of the population!
"When people who are honestly mistaken learn the truth,
they either cease being mistaken
or they cease being honest"
-- Anonymous
Top

White people are now about 60% of the population of the US and are considered to be the biggest threat to "democracy" and social stability.

"No arts; no letters; no society; and which is worst of all, continual fear, and danger of violent death; and the life of man, solitary, poor, nasty, brutish, and short."

First, in addition to the scientific problems with the Solutrean hypothesis which I’ll discuss shortly, it’s important to note that it has overt political and cultural implications in denying that Native Americans are the only indigenous peoples of the continents.
The notion that the ancestors of Native Americans were not the first or only people on the continent has great popularity among white nationalists, who see it as a means of denying Native Americans an ancestral claim on their land. Indeed, although this particular iteration is new, the idea behind the Solutrean hypothesis is part of a long tradition of Europeans trying to insert themselves into American prehistory; justifying colonialism by claiming that Native Americans were not capable of creating the diverse and sophisticated material culture of the Americas.

The mismatch between the archaeological record and the Solutrean hypothesis is so extensive that I can’t cover every problem, but here is a sample:

1. There’s a serious time gap between when the Solutreans could have crossed the Atlantic via the ice bridge (~20,000 YBP) and when Clovis tools begin to show up in the archaeological record (~13,000 YBP). This means that they would have made the points in exactly the same way for 7,000 years. Nowhere else in the Americas do we see technologies and cultures existing unchanging for that length of time.

2. There is no evidence of boat use, or tools used for making boats at Solutrean sites. Although the Ice Bridge documentary makes much of an image of a fish and an auk in a French cave, it is a bit of a stretch (to say the least!) to claim that this is sufficient to demonstrate a sophisticated seafaring culture, capable of crossing the Atlantic. The existence of a year-round “ice bridge” across the Atlantic during the Last Glacial Maximum is not supported by paleoclimate data. Instead, sea ice in the Atlantic would most likely have been seasonal, with a connection between North American and Europe only a few months out of the year.

3. The notion of overshot flaking technique as evidence of a link between Clovis and Solutrean has been challenged by many archaeologists, who think it far more plausible that the two cultures arrived at the same technology independently. As Strauss (2000) puts it, “One or two technical attributes are insufficient to establish a cultural link or long-distance interconnection.”

4. Radiocarbon dates of Clovis sites do not show a pattern one would expect if people diffused into North America from the east coast, as postulated by Stanford and Bradley.

Geneticists, too, have tested the Solutrean hypothesis. If it were true, we would expect to see ancestry from non-Siberian descended populations present in the genomes of ancient Native Americans.
We don’t.

https://www.theguardian.com/science/201 ... rom-europe
"When people who are honestly mistaken learn the truth,
they either cease being mistaken
or they cease being honest"
-- Anonymous
Top

Red haired people killed in Winnemucca, Nevada, cave. Some bodies are being hidden from the Political Correct quacks who don't allow for any information contrary to the sacred blanket ass theory. 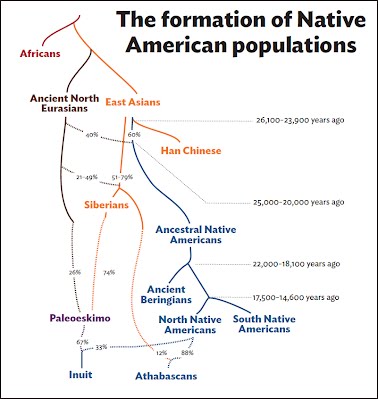