The RODOH Lounge is a place for general discussion, preferably non-Holocaust. The Lounge is only lightly moderated but please keep this a friendly place to chat with and get to know your fellow board participants.
Post Reply
211 posts

.
Rudy Guiliani says he has proof he can’t disclose yet...!?

I think that means he has nothing.

Thanks Torus, all interesting stuff. I just read the following from joo news:

Ahead of a Tuesday hearing in the case, Trump’s campaign on Sunday dropped the allegation that 682,479 mail-in and absentee ballots were illegally processed without its representatives watching.

The remaining claim in the lawsuit centres on disqualifying ballots cast by voters who were given an opportunity to fix mail-in ballots that were going to be disqualified on a technicality.

The lawsuit charges that “Democratic-heavy counties” violated the law by identifying mail-in ballots before election day that had defects – such as lacking an inner “secrecy envelope” or lacking a voter’s signature on the outside envelope – so that the voter could fix it and ensure their vote would count, a moved called “curing”.

Republican-heavy counties “followed the law and did not provide a notice and cure process, disenfranchising many”, the lawsuit said.

Cliff Levine, a lawyer representing the Democratic National Committee, which is seeking to intervene, said it was not clear how many voters were given the chance to fix their ballot. But, he said, the number was minimal and certainly fewer than the margin – almost 70,000 – that separates Biden and Trump. “The numbers aren’t even close to the margin between the two candidates, not even close,” Levine said. There is no provision in state law preventing counties from helping voters to fix a ballot that contains a technical deficiency. Levine said the lawsuit did not contain any allegation that somebody voted illegally.
More than 2.6m mail-in ballots were reported received by counties, and no report of fraud or accuracy problems has been made by state or county election officials or prosecutors.

A key theme of Trump and his supporters has been their claim that Philadelphia – a Democratic bastion where Trump lost badly – had not allowed Trump’s campaign representatives to watch mail-in and absentee ballots processed and tabulated.

However, Republican lawyers have acknowledged in a separate federal court proceeding that they had certified observers watching mail-in ballots being processed in Philadelphia. Governor Tom Wolf’s administration has said that ballot watchers from all parties had observers throughout the process and that “any insinuation otherwise is a lie”.

Governor Tom Wolf’s administration has said that ballot watchers from all parties had observers throughout the process and that “any insinuation otherwise is a lie”.

Hey, all of those videos of Republicans being forced out of the ballot counting area and the Democrats putting up window coverings so people couldn't observe their operations are all just photoshopped. Who ya' gonna' believe? Your lying eyes or Democrat governor Tom Wolf?
Top

Turnagain wrote: ↑
Mon Nov 16, 2020 5:50 pm
Hey, all of those videos of Republicans being forced out of the ballot counting area and the Democrats putting up window coverings so people couldn't observe their operations are all just photoshopped. Who ya' gonna' believe? Your lying eyes or Democrat governor Tom Wolf?

Covid and social distancing appears to be the rationale for excluding some people; it seems that Republicans do not take the pandemic seriously despite the 252 thousand reported deaths. Inside the ballot places are a mixture of people not just Democrats do work there. The legal action now is not on the observations or lack of. Trump’s campaign on Sunday dropped the allegation that 682,479 mail-in and absentee ballots were illegally processed without its representatives watching.
No longer an issue in that state.

The democrats using a scam to cover up a fraud. That's a good 'un, Hunt. I'm sure that AP is telling us the whole story about Trump's legal maneuvers and strategies. I think I'll wait until I see what Powell and Giuliani do in court.
Top

Yeah will be interesting. Forbes has this to say.
Rudy Giuliani, who Trump on Saturday put in charge of his efforts to challenge the outcome of the election, told Fox News he has mounting evidence that he is unable to show the public. “We have people that I can’t really disclose that can describe the hardware in great detail,” said Giuliani. As an outsider this seems to be grasping at straws.

Giuliani said:
“We already have enough affidavits from people who were pushed out from being able to observe, so in each one of those states that he lost narrowly, he won those states probably by 2, 3 percent,” he told Bartiromo."

Trump’s campaign on Sunday dropped the allegation that 682,479 mail-in and absentee ballots were illegally processed without its representatives watching.
No longer an issue in that state.

It looks like AP screwed the pooch again.
https://www.breitbart.com/radio/2020/11 ... ts-of-chan
Still believe everything that the Jewsmedia tells you?
Top 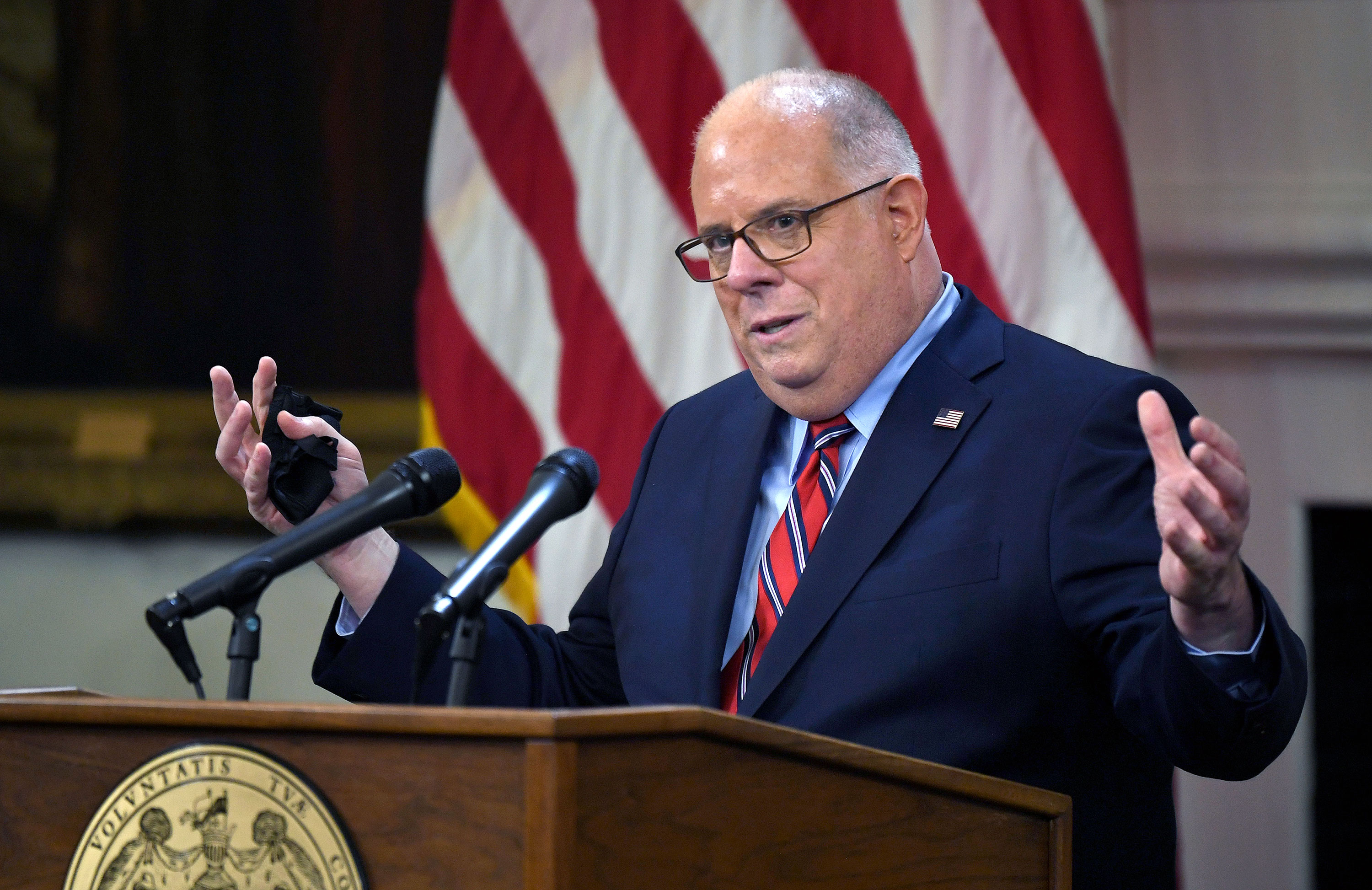 Maryland Gov. Larry Hogan speaks during a press conference on July 22 in Annapolis, Maryland.
Republican Gov. Larry Hogan said that “the time has come” for President Trump to accept that he has lost the election, telling an interviewer from The Ronald Reagan Presidential Foundation on Monday that Democrat Joe Biden notched a “pretty overwhelming victory” against Trump.

Hogan said that he agrees that the country needs “to make sure every vote is counted” and that a process to challenge irregularities should be followed, but that, so far, “there hasn’t been any evidence and (Republicans) haven’t won any cases.”

“It loses credibility,” Hogan said of Trump’s continued baseless claims. “More and more Republicans are coming out every day. We are in the middle of twin crises. Covid-19 is spreading all over the country… and our economy is collapsing, and the President is tweeting all day and night about beating Joe Biden instead of focused on let’s have a really successful next couple months and focusing on these problems.”
When asked directly about when Trump should concede, Hogan said: “I mean, tomorrow will be two weeks since we haven’t seen anything. The time has come. More and more people, very close supporters and friends of the president are all giving him that advice. He is just not listening.”

Hogan added that while recounts and challenges could flip upward of a few hundred votes, Trump’s claims aren’t going to come close to closing the gap.

“We are not going to make up for five million votes in all of those states,” Hogan said. “It was a pretty overwhelming victory at this point.”

This question and answer session came after a speech by the Republican governor and frequent Trump critic.

“The truth isn’t always easy to hear,” Hogan said in the speech, but “divisive rhetoric and toxic politics are alienating large parts of the country and no one will listen to our message if they don’t believe that we are listening to them.”

He added: “Are we going to be a party that can’t win national elections again or are we willing to do the hard work of building a durable coalition that can once again shape our nation’s destiny?”

Still believe everything that the Jewsmedia tells you?

Can't tell you to "chill" as it is already -12C there. (-10F) at 11am.
I get the feeling that the conflicting reports are not the joos so much as Mr Trump whipping Rudi into shape. 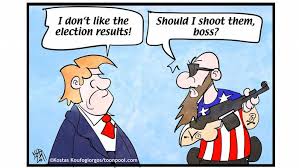