The RODOH Lounge is a place for general discussion, preferably non-Holocaust. The Lounge is only lightly moderated but please keep this a friendly place to chat with and get to know your fellow board participants.
Post Reply
1479 posts

Last night I called the election as the map below, with Arizona and Wisconsin squeaking in for Trump.

I may be wrong on both counts, and also Michigan. The media seems assured that Arizona is going full Lib-Tard.

If Arizona─which is being overrun by Shit-Libs from California and immigrants who are displacing legacy Americans─ends up being the tipping state for the Commie takeover, I will be pissed. 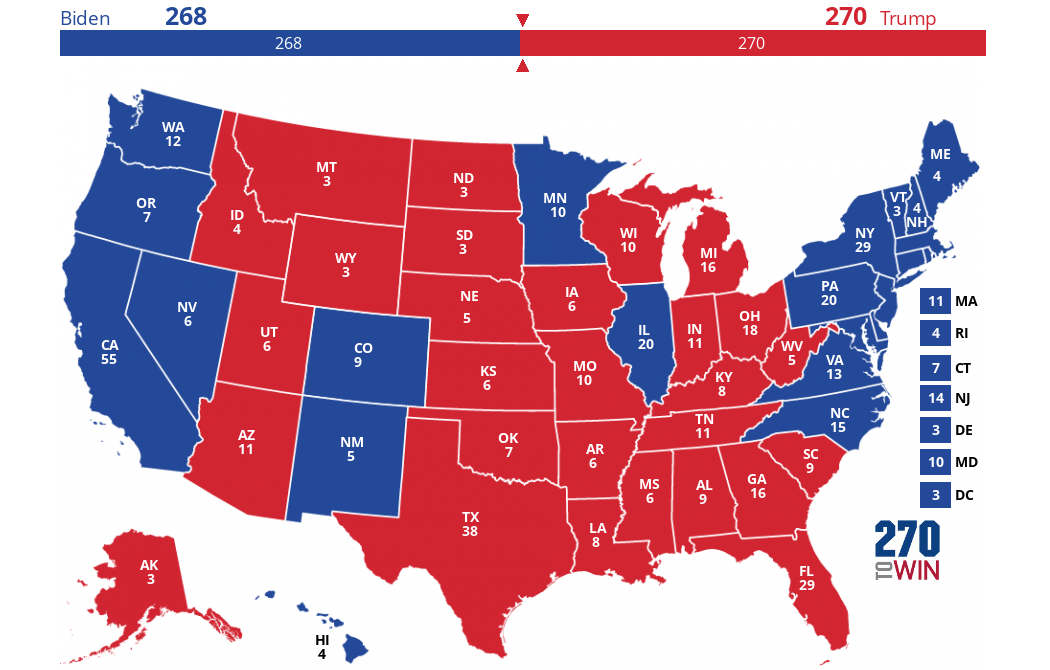 
...Amidst all the [uncertainty], however, there is one great success story. That is the tale of how Israel and its friends in politics and financial circles have been able to screw every possible advantage out of both major parties simultaneously and apparently effortlessly. Israel might be the true undisputed winner in the 2020 election even though it was not on the ballot and was hardly mentioned at all during the campaign.

Jewish billionaires with close ties to Israel have been courted by the two major parties, both to come up with contributions and to urge their friends in the oligarch club and media to also respond favorably.
The Democrats’ largest single donor is entertainment mogul Haim Saban.
The Republicans rely on casino multi-billionaire Sheldon Adelson. I

It is estimated that 60% of the political contributions for the Democrats comes from Jewish sources and Saban is the single largest contributor. He is also an Israeli holding dual citizenship.

Adelson, who may also hold dual citizenship and is married to an Israeli, is the major supporter of the Republicans, having coughed up more than $100 million in recent elections.

Both Saban and Adelson have not been shy about supporting Israel as their first priority.

The odds of literally every single one of those 130,000+ “mail-in ballots” being for Biden are almost statistically impossible and thus makes any objective observer immediately suspicious of fraud. Here's more: 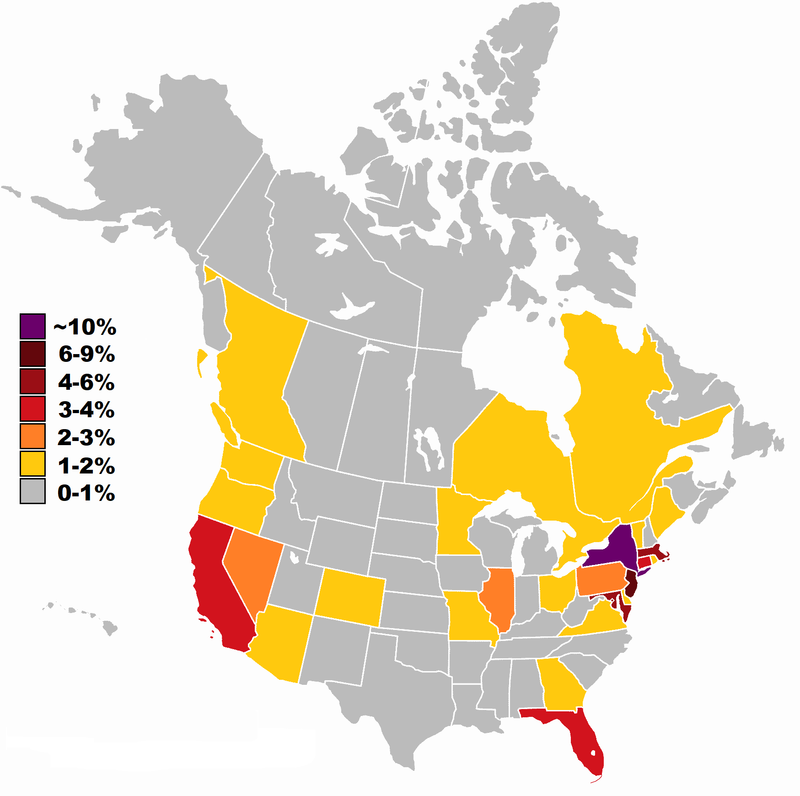 Jüdische population distribution in the US and Canada

The odds of literally every single one of those 130,000+ “mail-in ballots” being for Biden are almost statistically impossible and thus makes any objective observer immediately suspicious of fraud. Here's more:

Thanks for this.
"When people who are honestly mistaken learn the truth,
they either cease being mistaken
or they cease being honest"
-- Anonymous
Top


But they don’t provide a way to check their so-called fact checkers or what was deemed to be false about it!

Looks like the censorship and mind-manipulation has reached new heights.

No truth to GOP claims that Sharpies are invalidating Arizona ballots

How would they know which voters to give the bad pens to? The machines read the ballot, regardless of whether you use blue or black ink. If the machine doesn't read it properly, then they have to count it by hand. Not rocket science. The Sharpies actually work better than a ball-point pen because you have to color in a small circle completely.

Also, a lot of people were voting provisionally because of the Covid lockdowns, so they are casting the ballot at any precinct and often by mail. They don't send ballots out by mail unless your info is pretty correct. I had to go into to the precinct in person and they scanned my ID because I changed my address and they automatically failed to send a ballot to my P.O. Box. It was the deadest that I've ever seen a polling place. I did not have a wait at all.

I don't think the election was stolen in Arizona in any way. There has just been a lot of demographic change combined with redistricting per the census every decade. And we have gotten a lot of people moving in from Shit-Lib states that bring their crappy politics with them.

Plus, Trump really did not do very much for his base─the legacy White people who voted for him in 2016─so his coattails were not very long. The final counts will be in pretty soon in any case.

Yes, that occurred to me also.

Scott wrote: ↑
Thu Nov 05, 2020 12:09 am
The machines read the ballot, regardless of whether you use blue or black ink. If the machine doesn't read it properly, then they have to count it by hand. Not rocket science. The Sharpies actually work better than a ball-point pen because you have to color in a small circle completely.

Thanks for this. I don’t know what a sharpie is.
Top

An anonymous tipster with the Postal Service in Michigan has alleged his supervisor ordered mail carriers to backdate ballots mailed too late to be counted, Project Veritas revealed - and the service is reportedly investigating.
The self-professed mail carrier - whose voice and identity have been disguised by the conservative muckraking operation - claimed he and his colleagues were “issued a directive” to “collect any ballots we find in mailboxes,” collection boxes, and “outgoing mail in general” on Wednesday and “separate them at the end of the day so that they could hand stamp them with the previous day’s date” in an interview with Project Veritas posted on Wednesday night.

The ballots retrieved from general mail circulation were then put in “express bags” to be sent “wherever they needed to go” after being stamped, the tipster alleged. Under Michigan law, mail-in ballots must be postmarked by 8pm on Election Day - this past Tuesday - in order to be counted in the 2020 election.

The tipster claimed he worked for the Barlow branch of the Traverse City post office and that he had also spoken with a carrier at another branch who “watched the postmaster [stamping ballots with the previous day’s date].” Normally, “it would be clerks that would do it up at the distribution center,” he added.

President Donald Trump’s campaign filed a lawsuit against Michigan over alleged electoral malfeasance on Wednesday, charging Secretary of State Jocelyn Benson was allowing absentee ballots to be counted without a team of bipartisan observers. The campaign has filed several lawsuits as the vote count has piled up in apparent favor of Democrat Joe Biden. Georgia was ordered to separate late-arriving mail-in votes on Wednesday night after a Republican poll-watcher claimed to have seen 53 late-marked votes mixed in with legitimate ballots.


‘Ballots could be from Mars, as far as we’re concerned’:
Giuliani alleges mail-in voter fraud in Pennsylvania & Wisconsin

President Donald Trump’s campaign has tore into opponent Joe Biden’s campaign for allegedly attempting to steal the election in Pennsylvania and Wisconsin, complaining they’re being barred from monitoring the count.
The Trump campaign has filed a lawsuit against the governments of Pennsylvania and Wisconsin, former New York Mayor and Trump legal adviser Rudy Giuliani revealed on Wednesday, tearing into state governments for supposedly engaging in fraud “unlike any [he had] ever seen.”

Giuliani marveled at how “not a single Republican has been able to look” at ballots in Philadelphia, noting “we have a reputation for dead people voting” and people had historically been “bussed in” across the New Jersey border from Camden” in order to cast ballots. He complained that over 100,000 ballots had "mysteriously" appeared in the early-morning hours not only in Pennsylvania, but in Michigan, Arizona, and Nevada.

Calling the stonewalling “among one of the most anti-democratic things i’ve ever seen or encountered,” Giuliani slammed the mail-in voting process in general, noting that both parties legally have the right to observe the ballot-counting process and that the media establishment has historically called it “highly suspicious” - at least “when it didn’t apply to President Trump.” Yet Republican poll-watchers were kept “20 or 30 feet away, never able to see the ballot itself,” he said.

It wasn’t just Pennsylvania, Giuliani continued, suggesting a lawsuit was also pending against the state of Wisconsin, arguing that areas where Democratic challenger Joe Biden had gotten “60 to 70 percent of the vote” were not legitimate. “This was a concerted effort on behalf of the crooks that run the Democratic Party,” the former prosecutor said, accusing the Democrats of “dumping” tens of thousands of “fraudulent” ballots to bolster their candidate.

“We’re going to continue the lawsuit here, we’re going to bring a second one, and…quite possibly, we’ll do a national lawsuit and really expose the corruption of the Democratic Party,” Giuliani said, insisting he'd "never heard" of a situation in which over 80 percent of the votes had been counted and the vote hadn't been called for the apparent winner.

"When people who are honestly mistaken learn the truth,
they either cease being mistaken
or they cease being honest"
-- Anonymous
Top
Post Reply
1479 posts