by TheGodfather
Get a load of this. ''Nothing is truly Scandinavian!''

by Charles Traynor
I followed this story on Telegram as it was unfolding. Apparently SAS took down the original video after they began taking some really heavy criticism from basically everyone who had watched their shit video. They cut the worst parts out of the video and reposted the shortened version online expecting a different result but never got it. The tide is turning and more and more ordinary Lemmings are starting to wake up to what Jewish Multi-Kulti really means. 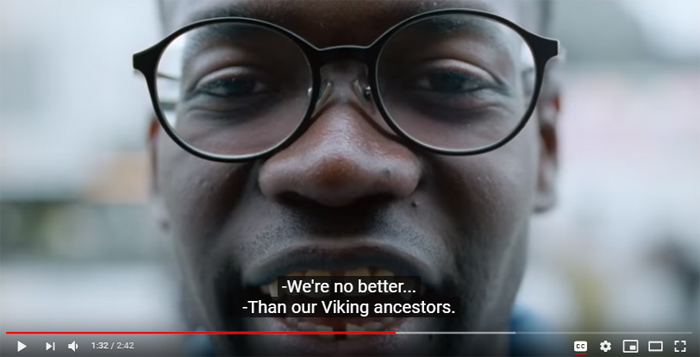 A still from the offending video: A darkie pisses on his Viking heritage.

I will make no bones about it, everyone involved in the making of this vile video deserves to be doused in petrol and burned to death.

by Turnagain
I don't watch TV. I have a TV but I've only used it for playing some DVDs. It isn't set up to receive broadcast and I don't have cable. However, from the internet I've seen that anti-White, anti-White culture and pro-miscegenation advertising is rampant with the SAS ad being the latest and most in your face example of that. Ads displaying the black male/White female motif are the current flavor of the day. If I watched TV, I would expect to see more of it.
All times are UTC+01:00
Page 1 of 1