The RODOH Lounge is a place for general discussion, preferably non-Holocaust. The Lounge is only lightly moderated but please keep this a friendly place to chat with and get to know your fellow board participants.
Post Reply
454 posts

Germany is set to put COVID dissidents who repeatedly fail to properly follow the rules in what is being described as a ‘detention camp’ located in Dresden.

This is not a Vaccine – Robert F. Kennedy Jr. and Medical Experts on the Covid Vaccine.

torus9 wrote: ↑
Sat Jan 16, 2021 7:28 pm
Germany is set to put COVID dissidents who repeatedly fail to properly follow the rules in what is being described as a ‘detention camp’ located in Dresden.

That is a fancy name for a konzentrationslager.

Roman Baber, a member of the Ontario legislature, was expelled from the governing Conservative Party for writing an open letter to Premier Ford saying "the medicine is killing the patient." 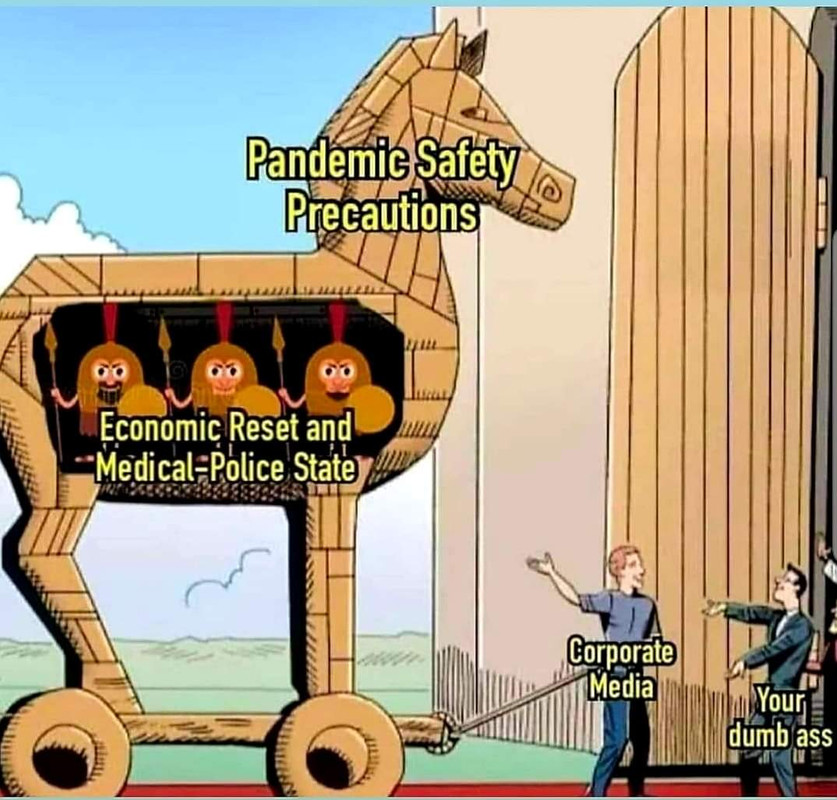 
The post was flagged as part of Facebook’s efforts to combat false news and misinformation on its News Feed. (Read more about our partnership with Facebook.)

IOW, boys and girls, the CDC is wrong because...well, just because. Bars, restaurants, mom and pop stores and most small businesses need to be put out of business. It's for your own good. Don't worry, the gubbermint will take care of you.
Top

Soz couldn't help putting this on.

.
Reminder: “the medical literature for the past forty-five years has been consistent: masks are useless in preventing the spread of disease and, if anything, are unsanitary objects that themselves spread bacteria and viruses”.

As a person who went to medical school, I was shocked when I read Dr. Neil Orr’s study, published in 1981 in the Annals of the Royal College of Surgeons of England. Dr. Orr was a surgeon in the Severalls Surgical Unit in Colchester. And for six months, from March through August 1980, the surgeons and staff in that unit decided to see what would happen if they did not wear masks during surgeries. They wore no masks for six months, and compared the rate of surgical wound infections from March through August 1980 with the rate of wound infections from March through August of the previous four years. And they discovered, to their amazement, that when nobody wore masks during surgeries, the rate of wound infections was less than half what it was when everyone wore masks.
Their conclusion: “It would appear that minimum contamination can best be achieved by not wearing a mask at all” and that wearing a mask during surgery “is a standard procedure that could be abandoned”.

I was so amazed that I scoured the medical literature, sure that this was a fluke and that newer studies must show the utility of masks in preventing the spread of disease. But to my surprise the medical literature for the past forty-five years has been consistent: masks are useless in preventing the spread of disease and, if anything, are unsanitary objects that themselves spread bacteria and viruses.

Ritter et al., in 1975, found that “the wearing of a surgical face mask had no effect upon the overall operating room environmental contamination.”
https://pubmed.ncbi.nlm.nih.gov/1157412/

Ha’eri and Wiley, in 1980, applied human albumin microspheres to the interior of surgical masks in 20 operations. At the end of each operation, wound washings were examined under the microscope. “Particle contamination of the wound was demonstrated in all experiments.”
https://europepmc.org/article/med/7379387

A review by Skinner and Sutton in 2001 concluded that “The evidence for discontinuing the use of surgical face masks would appear to be stronger than the evidence available to support their continued use.”
https://journals.sagepub.com/doi/pdf/10 ... 0102900402

Lahme et al., in 2001, wrote that “surgical face masks worn by patients during regional anaesthesia, did not reduce the concentration of airborne bacteria over the operation field in our study. Thus they are dispensable.”
https://europepmc.org/article/med/11760479

Figueiredo et al., in 2001, reported that in five years of doing peritoneal dialysis without masks, rates of peritonitis in their unit were no different than rates in hospitals where masks were worn.
http://www.advancesinpd.com/adv01/21Figueiredo.htm

Bahli did a systematic literature review in 2009 and found that “no significant difference in the incidence of postoperative wound infection was observed between masks groups and groups operated with no masks.”
https://www.semanticscholar.org/paper/D ... 6f481?p2df

Surgeons at the Karolinska Institute in Sweden, recognizing the lack of evidence supporting the use of masks, ceased requiring them in 2010 for anesthesiologists and other non-scrubbed personnel in the operating room. “Our decision to no longer require routine surgical masks for personnel not scrubbed for surgery is a departure from common practice. But the evidence to support this practice does not exist,” wrote Dr. Eva Sellden.
https://pubs.asahq.org/anesthesiology/a ... ary-in-the

Lipp and Edwards reviewed the surgical literature in 2014 and found “no statistically significant difference in infection rates between the masked and unmasked group in any of the trials.”
https://www.cochranelibrary.com/cdsr/do ... .pub2/full

Vincent and Edwards updated this review in 2016 and the conclusion was the same.
https://www.cochranelibrary.com/cdsr/do ... .pub3/full

Carøe, in a 2014 review based on four studies and 6,006 patients, wrote that “none of the four studies found a difference in the number of post-operative infections whether you used a surgical mask or not.”
https://europepmc.org/article/med/25294675

Salassa and Swiontkowski, in 2014, investigated the necessity of scrubs, masks and head coverings in the operating room and concluded that “there is no evidence that these measures reduce the prevalence of surgical site infection.”
https://journals.lww.com/jbjsjournal/Ab ... in.11.aspx

Da Zhou et al., reviewing the literature in 2015, concluded that “there is a lack of substantial evidence to support claims that facemasks protect either patient or surgeon from infectious contamination.”
https://journals.sagepub.com/doi/pdf/10 ... 6815583167

Schools in China are now prohibiting students from wearing masks while exercising. Why? Because it was killing them. It was depriving them of oxygen and it was killing them. At least three children died during Physical Education classes — two of them while running on their school’s track while wearing a mask.
https://www.thejakartapost.com/news/202 ... olicy.html

And a 26-year-old man suffered a collapsed lung after running two and a half miles while wearing a mask.
https://www.mirror.co.uk/news/world-new ... g-22018788

"When people who are honestly mistaken learn the truth,
they either cease being mistaken
or they cease being honest"
-- Anonymous
Top
Post Reply
454 posts