The RODOH Lounge is a place for general discussion, preferably non-Holocaust. The Lounge is only lightly moderated but please keep this a friendly place to chat with and get to know your fellow board participants.
Post Reply
296 posts

Without a doubt, Peter Gabriel has crafted some remarkable music during his career. Which is all the more remarkable given that he's a phucking idiot.

There have been extensive randomized controlled trial (RCT) studies, and meta-analysis reviews of RCT studies, which all show that masks and respirators do not work to prevent respiratory influenza-like illnesses, or respiratory illnesses believed to be transmitted by droplets and aerosol particles.

Furthermore, the relevant known physics and biology, which I review, are such that masks and respirators should not work... given what we know about viral respiratory diseases. The main transmission path is long-residence-time aerosol particles (< 2.5 μm), which are too fine to be blocked, and the minimum-infective dose is smaller than one aerosol particle.

The present paper about masks illustrates the degree to which governments, the mainstream media, and institutional propagandists can decide to operate in a science vacuum, or select only incomplete science that serves their interests. Such recklessness is also certainly the case with the current global lockdown of over 1 billion people, an unprecedented experiment in medical and political history.

As a person who went to medical school, I was shocked when I read Dr. Neil Orr’s study, published in 1981 in the Annals of the Royal College of Surgeons of England. Dr. Orr was a surgeon in the Severalls Surgical Unit in Colchester. And for six months, from March through August 1980, the surgeons and staff in that unit decided to see what would happen if they did not wear masks during surgeries. They wore no masks for six months, and compared the rate of surgical wound infections from March through August 1980 with the rate of wound infections from March through August of the previous four years. And they discovered, to their amazement, that when nobody wore masks during surgeries, the rate of wound infections was less than half what it was when everyone wore masks.
Their conclusion: “It would appear that minimum contamination can best be achieved by not wearing a mask at all” and that wearing a mask during surgery “is a standard procedure that could be abandoned.”

I was so amazed that I scoured the medical literature, sure that this was a fluke and that newer studies must show the utility of masks in preventing the spread of disease. But to my surprise the medical literature for the past forty-five years has been consistent: masks are useless in preventing the spread of disease and, if anything, are unsanitary objects that themselves spread bacteria and viruses.

Ritter et al., in 1975, found that “the wearing of a surgical face mask had no effect upon the overall operating room environmental contamination.”

Ha’eri and Wiley, in 1980, applied human albumin microspheres to the interior of surgical masks in 20 operations. At the end of each operation, wound washings were examined under the microscope. “Particle contamination of the wound was demonstrated in all experiments.”

Laslett and Sabin, in 1989, found that caps and masks were not necessary during cardiac catheterization. “No infections were found in any patient, regardless of whether a cap or mask was used,” they wrote. Sjøl and Kelbaek came to the same conclusion in 2002.

A review by Skinner and Sutton in 2001 concluded that “The evidence for discontinuing the use of surgical face masks would appear to be stronger than the evidence available to support their continued use.”

Lahme et al., in 2001, wrote that “surgical face masks worn by patients during regional anaesthesia, did not reduce the concentration of airborne bacteria over the operation field in our study. Thus they are dispensable.”

Figueiredo et al., in 2001, reported that in five years of doing peritoneal dialysis without masks, rates of peritonitis in their unit were no different than rates in hospitals where masks were worn.

Bahli did a systematic literature review in 2009 and found that “no significant difference in the incidence of postoperative wound infection was observed between masks groups and groups operated with no masks.”

Surgeons at the Karolinska Institute in Sweden, recognizing the lack of evidence supporting the use of masks, ceased requiring them in 2010 for anesthesiologists and other non-scrubbed personnel in the operating room. “Our decision to no longer require routine surgical masks for personnel not scrubbed for surgery is a departure from common practice. But the evidence to support this practice does not exist,” wrote Dr. Eva Sellden.

Lipp and Edwards reviewed the surgical literature in 2014 and found “no statistically significant difference in infection rates between the masked and unmasked group in any of the trials.” Vincent and Edwards updated this review in 2016 and the conclusion was the same.

Carøe, in a 2014 review based on four studies and 6,006 patients, wrote that “none of the four studies found a difference in the number of post-operative infections whether you used a surgical mask or not.”

Salassa and Swiontkowski, in 2014, investigated the necessity of scrubs, masks and head coverings in the operating room and concluded that “there is no evidence that these measures reduce the prevalence of surgical site infection.”

Da Zhou et al., reviewing the literature in 2015, concluded that “there is a lack of substantial evidence to support claims that facemasks protect either patient or surgeon from infectious contamination.”

Schools in China are now prohibiting students from wearing masks while exercising. Why? Because it was killing them. It was depriving them of oxygen and it was killing them. At least three children died during Physical Education classes -- two of them while running on their school’s track while wearing a mask. And a 26-year-old man suffered a collapsed lung after running two and a half miles while wearing a mask.

“We are living in an atmosphere of permanent illness, of meaningless separation,” writes Benjamin Cherry in the Summer 2020 issue of New View magazine. A separation that is destroying lives, souls, and nature.
_____________
* from Christopher Fry, A Sleep of Prisoners, 1951.

“...In closing, I wish to note that in the last 40 years alone the UK has had seven official epidemics/pandemics; AIDS, Swine flu, CJD, SARS, MERS, Bird flu as well as annual, seasonal flu. All were very worrying but schools remained open and the NHS treated everybody and most of the population were unaffected. The country would rarely have been open if it had been shut down every time.

I have explained how a hopelessly-performing diagnostic test has been, and continues to be used, not for diagnosis of disease but, it seems, solely to create fear.

This misuse of power must cease. All the above costs are on the ledger, too, when weighing up the residual risks to society from COVID-19 and the appropriate actions to take, if any. Whatever else happens, the test used in Pillar 2 must be immediately withdrawn as it provides no useful information. In the absence of vastly inflated case numbers arising from this test, the pandemic would be seen and felt to be almost over.”

This is a far more accurate way
to see IF COVID-19 impacted mortality. 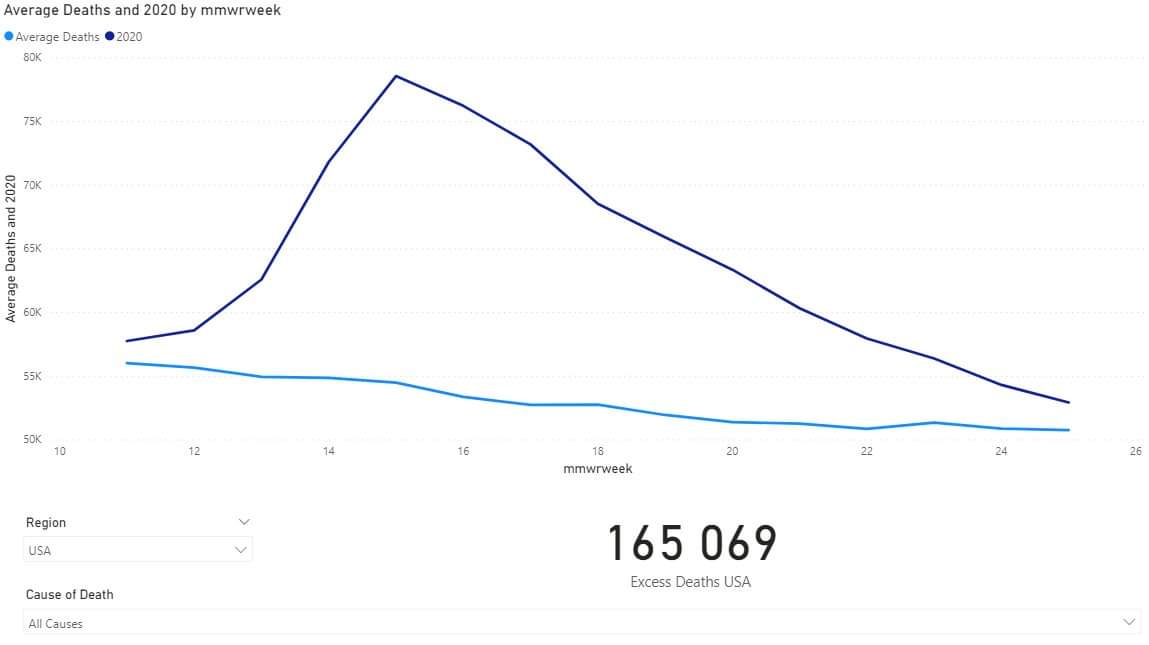 "A British participant in AstraZeneca's coronavirus vaccine trial was diagnosed with a serious neurological disorder weeks after her second dose of the inoculation, an internal company document shows.
A previously healthy 37-year-old woman was hospitalized this month after receiving two injections of the pharmaceutical giant’s new vaccine, where it was determined she developed transverse myelitis, a rare neurological ailment caused by inflammation of the spine..."

Peter Gabriel? Step right up. There's no reason for wealthy, corpulent, ex pop stars, to not put their money where there ass is.