The RODOH Lounge is a place for general discussion, preferably non-Holocaust. The Lounge is only lightly moderated but please keep this a friendly place to chat with and get to know your fellow board participants.
Post Reply
18 posts

What are your thoughts on race mixing?

Do you think it’s wrong for blacks and whites to race mix?

What about when it comes to different ethnicities and religions e.g. a Jew and a German or a religious Jew and a Hindu Indian?

Do you think the various anti-miscegenation laws in history such as the Nazis passing of The Law for the Protection of German Blood and German Honour as part of the Nuremberg Laws, the laws in the United States and the laws in South Africa were justified and right?

What is wrong with race mixing?
Top

Ask the Zionist Jews. They're against mixing.

So the question then becomes, why do Jews wish to deny to the rest of the world what they want to practice for themselves? Why should people turn a blind eye to their hypocrisy? Why should people accept double standards just because a Jew tells them to?

What is wrong with Jews?

I dislike a lot of them because of their anti white, pro immigration bent in the west, but their hypocritical anti immigration pro Zionist bent in Israel. In other words, hypocrisy. Jews get to dictate not only how their own borders work, but how borders in the rest of the world work. They would deny autonomy to everyone else but keep it for themselves. It's their chutzpah that annoys me. I never had a problem with many Jews until I saw that they were doing and how they were attacking my culture and my country.

The fact that many of them are siding with the outsiders and illegal immigrants over natural born Americans, Canadians, Australians just proves the old stereotype about being disloyal. Other more sensible Jews are asking their fellow Jews to stop doing this, or they will create their own anti semitic golem. David Cole/Stein and Michael Savage are a couple who come to mind. If those two are serious and not plants, then those type of Jews are the reason anti semitism isn't as bad as it could be. They understand that they have to show loyalty to a host country/culture. They apparently learned the lessons of the holocaust!

All Jews have to do is respect the majority white gentile cultures/countries that saved their grandparents in world war two from a far worser fate by pledging allegiance instead of being cultural distorters and parasites. Maybe if they moved to places like Sweden and Germany and tried to live in all those no go zones next to all the Muslims they demand by let in, people wouldn't think them hypocrites full of chuztpah. Jews can either behave themselves and show loyalty to their country or be cheerleaders for policies that make whites a minority, while they hypocritically refuse to live next to the people they demand be brought in. There is no middle ground. The majority of the time, it's up to Jews to make people like them.


No mixed marriages
Israeli law records religious designations for each of its citizens and it does not permit couples registered under different religions to legally marry one another. 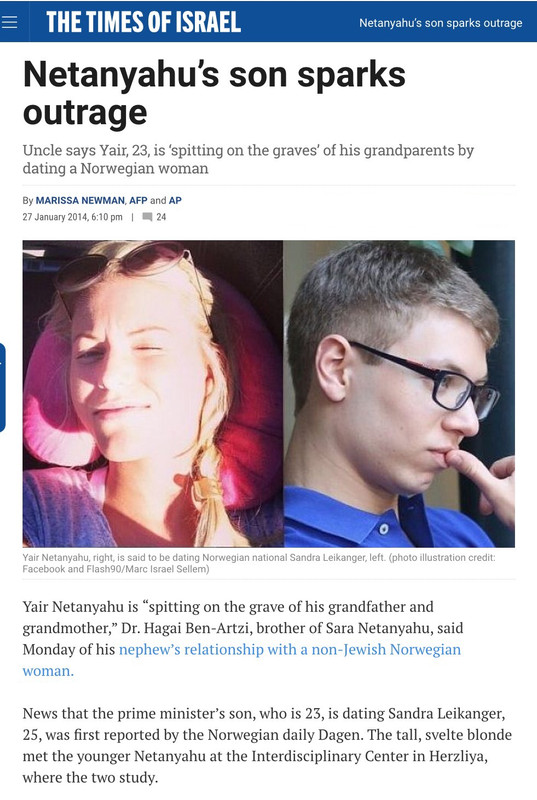 In an interview with ultra-Orthodox website Kikar HaShabbat, Ben-Artzi urged his nephew to cut ties with his new girlfriend, and warned him that should he choose to pursue the relationship, Ben-Artzi would personally see to it that he would not be allowed near his grandparents’ graves.
“It’s terrible,” Ben-Artzi said. “Just terrible, and the son of the prime minister no less. It is the worst thing that is threatening and was a threat throughout the history of the Jews.”

On Monday, ultra-Orthodox Shas MK Arye Deri responded to news of the relationship by saying, “If God forbid it’s true, then woe to us, woe to us.”

One of Israel's two chief rabbis, Yitzhak Yosef, called black people "monkeys" and the Hebrew equivalent of the N-word in his weekly sermon. It is highly unlikely that Yosef will face any real repercussions for his racist comments. He was not demoted after saying in a similar sermon exactly two years ago that all non-Jews — Africans, Arabs, or otherwise — could only live in Israel if they agree to serve the country's Jewish population.

It's unclear if Yosef's recent comments were directly connected to the Israeli government's impending expulsion of approximately 40,000 African refugees, mainly Christians and Muslims from Eritrea and Sudan.

On March 19, Prime Minister Benjamin Netanyahu said in a public speech that the arrival of non-Jewish African refugees was "much worse" for Israel than "severe attacks by Sinai terrorists".
Netanyahu associated refugees with terrorists, when he announced special screenings for visitors arriving from Africa. The new policy, he explained, was intended to prevent the entry of the ebola virus, but was also "part of Israel's general efforts to protect our borders from illegal infiltrators and terror". "Infiltrators" is the derogatory term used for years by Israeli officials to dehumanize the African refugees.
https://www.aljazeera.com/indepth/opini ... 34932.html
"When people who are honestly mistaken learn the truth,
they either cease being mistaken
or they cease being honest"
-- Anonymous
Top

And there I was thinking that there were going to be some decent and honest replies from the different users on this forum about their own views on the subject.

I was asking for answers from the users on this forum, not what Zionists (both Jewish and non-Jewish), Jews, and others think about it.

What are YOUR opinions?
Top

Alter Cohen wrote: ↑
Wed Nov 06, 2019 9:27 am
I was asking for answers from the users on this forum, not what Zionists (both Jewish and non-Jewish), Jews, and others think about it.

Too bad. Our argument is that if they can practice non-mixing, so can we; we being the majority white middle class countries. Everyone has a right to want to retain their culture and racial heritage, and that's the end of it. The fact that you get triggered by the existence of white majority gentile countries and that you are living in a majority white gentile country either means you need therapy or you just need to get over it and focus on real world problems instead.

Alter Cohen wrote: ↑
Wed Nov 06, 2019 9:27 am
I was asking for answers from the users on this forum, not what Zionists (both Jewish and non-Jewish), Jews, and others think about it.

Too bad. Our argument is that if they can practice non-mixing, so can we; we being the majority white middle class countries. Everyone has a right to want to retain their culture and racial heritage, and that's the end of it. The fact that you get triggered by the existence of white majority gentile countries and that you are living in a majority white gentile country either means you need therapy or you just need to get over it and focus on real world problems instead.

The thread title clearly states “you”. If I wanted to read about what Zionists or others thought about it then I would use Google.

I’ll repeat again: this thread is about what people on this forum think about it.
Top

I'm Canadian. I don't give a shit if an aboriginal wants to marry a white.

What do I think about it?

What should be done about it?

Well, I think that anti-miscegenation laws were reasonable, at least in theory. Blacks and Whites do not need to be "colonizing" and "civilizing" each other. These races, by far, are not compatible.

Since I think nationality and culture is ultimately derived from race/ethnicity, at the very least race-mixers should lose their citizenship. As explained by a certain politician in his Mein Kampf, Citizenship and Nationality are not necessarily identical or equivalent.

In the United States, the first Naturalization Act of 1790 limited naturalization to immigrants who were "free white person(s) ... of good character."

Muslims are not my concern unless they are being brought into Western Civilization, where they do not belong. I don't have a problem if Israel wants to be an ethno-state either, as long as the Jewish Diaspora is not using the USA or Europe as their Golem to fight Palestinians or whatever anti-Semites. 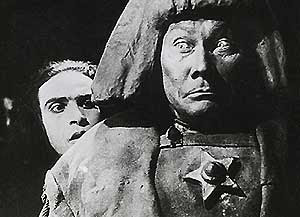 With respect to the 1935 Nazi Nuremberg Laws, I have usually had the opinion that they went too far.

When the NSDAP came to power in 1933, throwing Jews out of the civil service, law and other academic fields where they were over-represented and had dubious loyalty to Germany, was one thing─cancelling their citizenship and even erecting Rabbinical bright-line marriage barriers between them and German Gentiles in 1935 was another.

But since the 2016 Trump Presidential election I have become more extreme in my opinions, I suppose.

Billionaire real estate developer and raucous celebrity Donald Trump was less beholden to campaign financing from "special interests" and opportunistically went off-script to play upon smoldering Populist and Nationalist sentiments and overwhelmingly gained the scorned White vote, thus winning the 2016 American Presidential election─which scared the bejesus out of the Establishment, and thus the mask of Talmudic camouflage, especially with the so-called Fourth Estate or the "media elite," has fallen off in the panic.

So on the one hand you have 99 percent of the corporate news media in full "Resist!" mode peddling fake news and the Kool-Aid of "Fear Entertainment News," while porky anarchist drop-outs take to the streets as masked rabble wanting to "punch Nazis" and silence any dissent not in step with their halcyon dreams of "woke" Soylent Maoism. Impotent police do almost nothing but look scary and be ornery. Very "Weimar Republic."

Historically and to the present day, all of the Civil Rights and open-borders organizations seem to be run by Jews; they seem to have also invented the modern concept of Thoughtcrime, and blatantly define Racism as being when White people have interests. The worst form of Hate is when White people advocate for those interests; it is ipso facto Genocide, and nothing is holier than the Holocaust of Holies. We are endlessly reminded of this by our betters in the media and from the lavishly endowed nabobs in academia.

I don't want to overstate the idea that Jews have alien loyalties that need to be fought. But arguably, they do seem to be the party most responsible for race-mixing and multi-cultural propaganda. All the same, Jews seem historically to overplay their hand and get themselves into trouble with Gentile nations as a result.

If Barbara Lerner Spectre in the clip below is illustrative of this new brand of corrosive Diversity and Inclusion, then this seems to be in their nature as an "Alien" people. Maybe the best kind of fumigant for this kind of stranger-pestilence is one that works.

Every time I see the Spectre clip my head eventually starts weaving left and right as if to subconsciously counter this hag's voodoo. The out of sync audio coupled with the eyes makes this clip appear to be an outtake from 'The Exorcist.'
Top
Post Reply
18 posts