The RODOH Lounge is a place for general discussion, preferably non-Holocaust. The Lounge is only lightly moderated but please keep this a friendly place to chat with and get to know your fellow board participants.
Post Reply
153 posts

In Britain, two people motivated by hatred based upon their self-identification as 'Jews' — Rachel Riley and accomplice Oberman — have just lost their mercenary-driven, FALSE case of 'anti-semitism' against a barrister.
Their hypocritical abuse of defamation and libel laws in Britain has been thwarted by crowd funding.

Their other ongoing FALSE case and hounding/persecution— against a journalist — hopefully will also be thrown out by the judiciary.

Jewish TV celebrity Rachel Riley claims her legal actions are not about money but combatting "vile lies". The hypocrisy, dishonesty and cheating mentality is alarming. 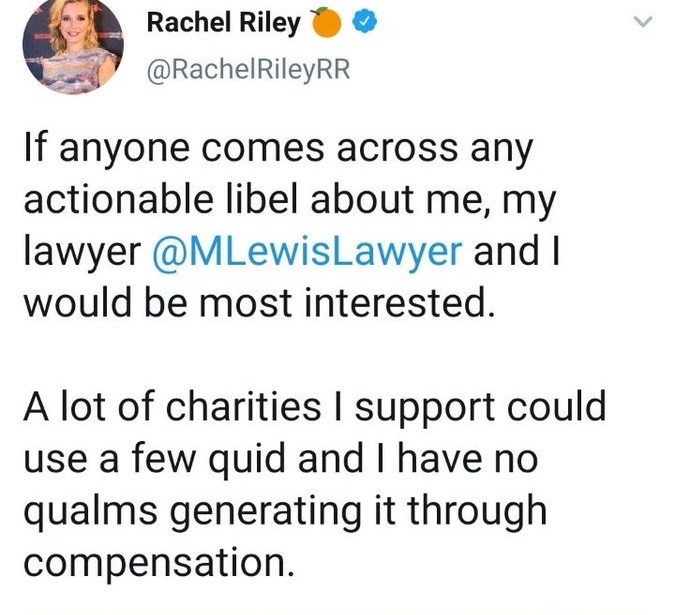 In another case brought by another person motivated by hatred based upon his self-identification as 'Jewish', crowd funding has been huge.
John Ware a reporter for Panorama is taking legal action for libel against former Labour leader Jeremy Corbyn.

Chris Williamson is another who is fighting back against the slanderous and hate-motivated misuse of power and the 'anti-semitism' accusation by appealing for help through crowd-funding!

Play both sides of the fence.
Have 'your' people infiltrated in all groups / political parties /movements.
Divide and rule.
Confuse and control.
Misinform and manipulate.
"When people who are honestly mistaken learn the truth,
they either cease being mistaken
or they cease being honest"
-- Anonymous
Top

been-there wrote: ↑
Wed Aug 05, 2020 9:21 am
Play both sides of the fence.
Have 'your' people infiltrated in all groups / political parties /movements.
Divide and rule.
Confuse and control.
Misinform and manipulate.


Sir Keir Starmer seems to be doing a good job at pitching himself as being on the left. He and his supporters make claim he will “unite the party” and make a point to emphasise his so-called “left-wing credentials”.
You may hear that in his twenties he edited a Trotskyist magazine. Or that he was the defence barrister for the miners out on strike in 1984/5. That he stood alongside McDonalds’ workers on picket lines.

But there is one association Sir Kier Starmer and his supporters are not talking about...
The Trilateral Commission, of which Starmer is a member.

Starmer’s name first appeared on the membership list of the Trilateral Commission in April 2019. Out of 650 MP’s, he was the only one invited to become a member.

What we have is Sir Keir Starmer, as part of an organisation that Holly Sklar, who edited a book on the organisation entitled 'Trilateralism: The Trilateral Commission and Elite Planning for World Management', identifies as the commission that “represents the interests of multinational corporations and banks”.
This means it is contrary to the interests of so-called ‘non-developed’ countries and workers the world over. It wants wages kept low. It wants voters kept apathetic and polarised.

An example of its influence
Barack Obama appointed eleven members of the Trilateral Commission to top-level and key positions in his administration within his first ten days in office. This represents a very narrow source of international leadership inside the Obama administration, with a core agenda that is not necessarily in support of working people in the United States.

Trilateralist Brent Scowcroft has been an unofficial advisor to Obama and was mentor to Defense Secretary Robert Gates. And Robert Zoelick, current president of the World Bank appointed during the G.W. Bush administration, is a member.

Connections to the dark side
The Trilateral Commission has sought to reinvent its doctrine in the face of increasing suspicion, certainly of globalisation and its impacts upon nation-states but also in cases in which some people have become increasingly aware of the deep state in which the Tripartite Commission, Davos, Bilderberg, the World Bank and the International Monetary Fund (IMF) are significant parts.

To add to their problems there are those whose behaviour could somewhat tarnish their already suspect reputations including amongst the most prominent, Jeffrey Epstein, former hedge fund manager and convicted sex-trafficker

Birds of a feather, flock together.’ It is almost certain that some current and former members of the elitist Trilateral Commission who participated in Epstein’s follies are likely very nervous that he would ‘flip’ and expose their debauchery, if not their sexual felonies.’ This, of course, has now been ‘avoided’ as Jeffrey Epstein ‘officially’ took his own life in August 2019. LINK

Let’s take a closer look at Mr. Epstein, shall we.

One of the most surprising things about Jeffrey Epstein is that he is a member of some of the most powerful and influential groups in the US.
He’s a member of:
— The Council on Foreign Relations
— The Trilateral Commission
— Trilateral North American Group

Read more here:
https://labourheartlands.com/sir-keir-s ... WQJ99yLIw0
"When people who are honestly mistaken learn the truth,
they either cease being mistaken
or they cease being honest"
-- Anonymous
Top
Post Reply
153 posts