Population data
Photo copies of jüdisch World Almanacs are presented below. These figures up until 1940 fit in with the fudged figures in the graph presented here

One can see at a cursory glance that there is no loss of jüdisch population. and has been used by some people to claim that this is evidence of no holocaust. Such a site is found here.

The explanation to explain the figures are given below.
Only in 1949 are postwar estimates employed, the figures given are for estimates made in 1948. A year or two lag seems to be common for various other population estimates given by the World Almanac. The difference between the 1938 and 1948 figures is thus 4,481,491. In 1949, however, the World Almanac gives a revised 1939 population of 16,643,120 giving a difference of between 1938 and 1947 of 5,376,520. Where the extra population between 1938 and 1939 came from is not cited, though one might speculate that it was based upon the Nazi estimates made in 1942 for the Wannsee Conference. Despite the apparent exactness of the numbers listed, the World Almanac warns that all numbers listed are estimates.
It would appear that all the figures are just not estimates as claimed but complete fabrications. The almanac is compiled and revised by the same people who declared War on the Reich and led by Samuel Untermyer a Zionist Jude.
. These people are Internationale zionistische Juden who had much to gain politically and financially by fudging the documents.
These people revised the fabrication they invented in the first place. Zionist Juden made those alterations to fit the holocaust narrative. The graphs compiled by computers with data publicly sources and back extrapolated by modern data show that in 1950 there should be about 11.9 million Juden, but in reality there were 11.3 million which is a loss of 600 000.
In 1939 there were 11.3 million Juden world wide, the Zionists Juden revised this post war to 16.6 million and increase of 5.3 million.

They also did not define who they classed as jüdisch, whether it was religious Juden or racial Juden or as suspected pulled out of a hat like Simon Wiesenthals imaginary 5 million goy holocuasted. We obviously have it wrong. Steve Johnson has put a Hakenkreuz in concrete onto his lawn, stating it is a revered Asian symbol.
At 00:45 seconds into the clip his neighbour jüdin Renee Schulze speaks with the reporter. She said "On behalf of 800 million Jews who died with that" she is offended. Renee has increased the alleged holocaust numbers by 133.3 times.

According to her numbers 35% of the worlds population were exterminated by the Nazis.

Huntinger wrote: ↑
Sun Nov 24, 2019 8:24 pm
We obviously have it wrong. Steve Johnson has put a Hakenkreuz in concrete onto his lawn, stating it is a revered Asian symbol.
At 00:45 seconds into the clip his neighbour jüdin Renee Schulze speaks with the reporter. She said "On behalf of 800 million Jews who died with that" she is offended. Renee has increased the alleged holocaust numbers by 133.3 times.

According to her numbers 35% of the worlds population were exterminated by the Nazis.

These people don't even know their own mythology!! Eight hundred million!!!

I think the extermination of 35% of the worlds population is a rather difficult task. I think the Martians in War of the Worlds would be proud of that achievement. Who knows they might give us a job. Not sure how we would fare on Mars planing maize.

The number of villagers in the world in 1939 was no more than 12 million. Back extrapolation from modern reliable data prove this as the line of best fit is rather linear. The graph below shows the linear line, the spike in data is fudged data from the AJA headed by Samuel Untermeyer who collected and published the statistics. 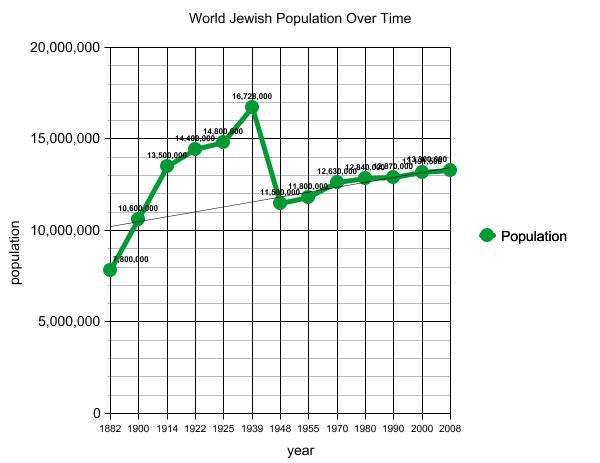