The RODOH Lounge is a place for general discussion, preferably non-Holocaust. The Lounge is only lightly moderated but please keep this a friendly place to chat with and get to know your fellow board participants.
Post Reply
242 posts

Re: JEW-GATE: Didn't Julius Streicher use Harvey Weinstein as a model already?

.
The President of the apartheid (hafrada) Jewish State of Israel has written a letter of concern to Israeli society after news emerged of a gang-rape by Israeli Jews of a teenaged Jewish woman in Eilat.

Compare that with the heros welcome given to the gang-rapists of a British teenager in Cyprus last year.

DIFFERENCE:
The British girl in Cyprus was regarded by Jews as a shiksa.
The Israeli girl in Eilat is regarded as a fellow Jew.

CONCLUSION?
Gang-raping a shiksa and gang-raping a Jewess are not regarded as equal crimes apparently by Jewish society in Israel. It appears as though Rivlin wrote because Jewish rape of Jewish women is increasing.


Rivlin writes to youth about alleged Eilat rape: ‘Destroying us as a society’

In open letter, president says sexual assaults are ‘stains that cannot be erased,’ pleads for younger generation to adhere to boundaries, take action against misconduct 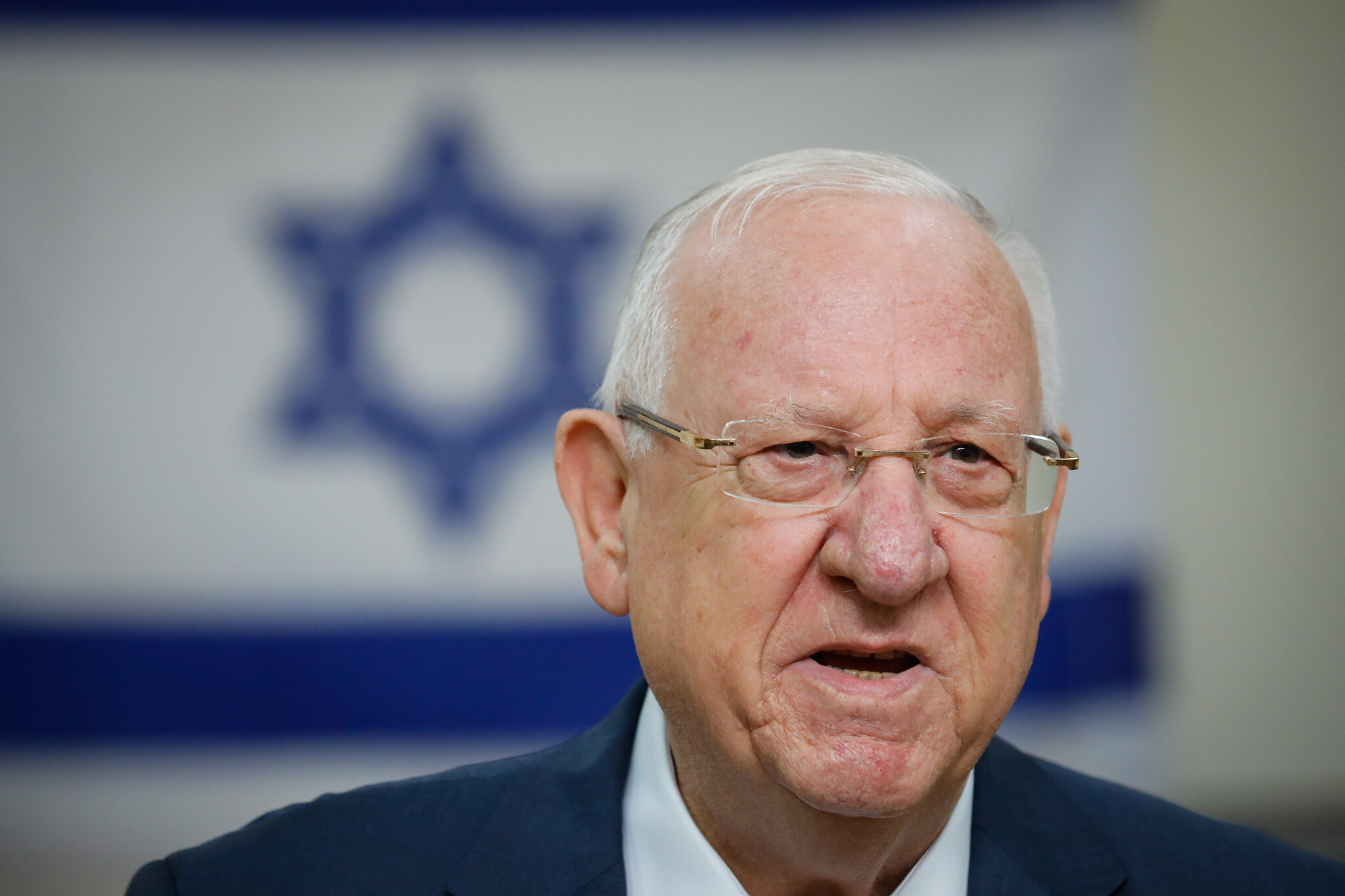 The alleged assault sent shockwaves through Israel, after testimony indicated that a large group of men lined up outside the intoxicated 16-year-old’s hotel room, waiting their turn to rape her, as eyewitnesses failed to intervene.
The incident follows several other high-profile reports in Israel of sexual misconduct and rape in the past year.
In a lengthy missive posted to his Facebook page and addressed to young Israelis, Rivlin said, “I write to you even though I no longer have words in the face of the horror that was reported in the gang rape in Eilat”.

The case follows other high-profile reports of suspected sexual misconduct and an increase in rape cases in Israel.
In August 2019, eight teenagers allegedly raped an 11-year-old girl in northern Israel, and in September 2019, a 13-year-old girl said she was raped by classmate on school grounds in the southern town of Netivot.
In June, two top Israeli soccer players were accused of committing statutory rape with two underage girls. Some commentators drew parallels between the online dialogue surrounding the soccer players’ case and the alleged Eilat attack.

Last year a group of Israeli men and teens were arrested in Cyprus after a British woman said they gang raped her at the Ayia Napa holiday resort on the east Mediterranean island.
The British tourist was found guilty of lying about the alleged attack but has stood by her account of the 2019 incident, saying Cypriot police gave her no choice other than to retract her claim.
All 12 of the Israelis were initially arrested but released after police said the woman retracted the rape allegations. They all returned to Israel and were greeted with scenes of celebration that many commentators deemed highly inappropriate under the circumstances.

Nine out of 10 rape cases in Israel are closed by prosecutors without charge, according to an annual survey released at the end of last year, which also found a significant increase in reports of sexual assault and harassment to the authorities.

Re: Didn't Julius Streicher use Harvey Weinstein as a model already?

.
MIA FARROW on ex-husband Woody Allen:
“Your not supposed to f***k the kids!"

Woody Allen often took his temperature at 10-minute intervals.
...Allen made no decision without consulting his shrink, devoting part of several sessions to the issue of whether to switch from polyester to cotton sheets.

With his shrink's assent, Allen agreed to have a child with Mia Farrow. When a biological child did not seem a possibility, Farrow in 1985 adopted a newborn Midwestern girl, Dylan. Not long after, Allen and Farrow conceived their son Satchel.

Then begins the whole, long, gory tale of Woody and Mia, Woody and Soon-Yi, Woody and Dylan. To recap, according to Farrow: Allen took an unnatural, obsessive interest in Dylan, to the exclusion of all of the other children — or so Farrow thought.
He was indifferent to Satchel, calling him, according to Farrow, "the completely superfluous little bastard."
But Dylan he would not leave alone. He was all over her, holding his thumb in her mouth, putting his face in her lap. Once Farrow pulled Dylan out of a bed where Allen, wearing only his underpants, was wrapped around her.

When Allen came over Dylan would beg her brothers and sisters to hide her. A therapist called the behaviour inappropriate. Allen agreed to counseling, and so Farrow let him legally adopt Dylan along with Korean-born Moses, the only other child without a father.

Then, in 1992, Farrow found the nude pictures of Soon-Yi in Woody Allen's apartment, and the bitter battle began. During a visit with the children in Connecticut, Allen disappeared with 7-year-old Dylan for 20 minutes. No one could find them. Dylan said they were in the attic. Allen denied this, but refused to say where they had been.

Farrow took Dylan to a doctor, the doctor alerted the authorities, and the rest was dismal history. The Connecticut investigation was dropped. The judge in the New York custody battle castigated Allen, calling his behavior toward Dylan "grossly inappropriate" and awarding custody of Dylan, Moses and Satchel to Farrow.

Woody Allen is “lying and he’s been lying for so long,” said Dylan Farrow during an emotional television interview.
Farrow spoke at length about her long-held accusation that Allen molested her as a child, allegations which first surfaced in 1993 when Dylan was just seven years old. The rumours have persisted around Allen for years, but the famed filmmaker has yet to pay any discernible price, continuing to make movies to this day. [Jewish power?]

Dylan recounted in great detail the day that she says she will never forget:
“I was taken to a small attic crawl space… He instructed me to lay down on my stomach and play with my brother’s toy train that was set up… As I played with the toy train, I was sexually assaulted… As a 7-year-old I would say, I would have said he touched my private parts. As a 32-year-old, he touched my labia and my vulva with his finger.”

In an op-ed for The Los Angeles Times, under the headline “Why has the #MeToo revolution spared Woody Allen?” Dylan Farrow wrote: “I have long maintained that when I was 7 years old, Woody Allen led me into an attic, away from the babysitters who had been instructed never to leave me alone with him. He then sexually assaulted me.”


been-there wrote: ↑
Wed Nov 08, 2017 3:47 am
.
More on the taboo observation/perception that currently is only being PUBLICALLY discussed among Jews —and in Hebrew — viz. that the rampant sexually predatory, perverse behaviour of Weinstein, Polanski, Woody Allen, Toback, Ratner, Granville, etc., is perceived as a particularly 'Jewish’ problem.

In case people have forgotten, a convicted PAEDOPHILE who fled impisonment, who is still today a criminal fugitive, was honoured in absentia by the Jewish-controlled Hollywood industry with an Oscar for a disgustingly emotionally-manipulative, deceitful/delusional, "poor us"-mythological, pseudo-historical 'Holocaust' film. This despite him being previously CONVICTED of this:

“In March 1977 Polanski was arrested and charged in Los Angeles with five offences against Samantha Geimer. At the time of the offences she was 13 years old.
He was charged with rape by use of drugs, perversion, sodomy, lewd and lascivious act upon a child under 14 and furnishing a controlled substance to a minor.
At his arraignment, Polanski pleaded not guilty to all charges.”

Basically he raped a child and then lied about it. See the vox article for his deceit in his autobiography about her.

And that was neither the first or the last time. It continued...

...Barnard is one of five women who have accused Polanski of sexually molesting them when they were underage.


Since Geimer’s allegations, Roman Polanski, the film director, has faced allegations of sexual assault by three additional women. In 2010, British actor Charlotte Lewis said that Polanski had “forced himself” on her while she was auditioning for a role in Paris in 1983, while this year, two more women have come forward with their own accounts of alleged assault at the hands of the director.
https://www.theguardian.com/film/2017/o ... llegations

The long history of Roman Polanski’s child rape charges, from 1977 to the present.


been-there wrote: ↑
Tue Oct 31, 2017 5:45 am
Here, an Israeli news article — in Hebrew — on the Weinstein sexual harassment scandal, deals with the perception among Jews that such behaviour is perceived as a particularly 'Jewish’ problem.

(The following is a translation using google translate)

Not only Weinstein:
US Jewry is concerned about the wave of accusations

The many complaints against Jewish journalists, artists and intellectuals of sexual harassment are a concern to the community's leaders, although there are many who do not belong to the chosen people

Last week, Oppenheimer hastened to deal with another dark corner - that of American Jewish tradition. Published in the magazine "Tablet", this determined, talented Jewish writer in a relaxed way described Harvey Weinstein — the Hollywood producer accused of a long series of sexual harassment, indecent acts and acts of rape — as a "very Jewish kind of deviant." 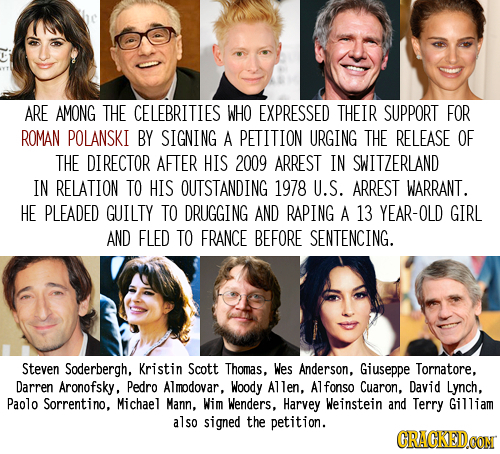 "When people who are honestly mistaken learn the truth,
they either cease being mistaken
or they cease being honest"
-- Anonymous
Top
Post Reply
242 posts