The RODOH Lounge is a place for general discussion, preferably non-Holocaust. The Lounge is only lightly moderated but please keep this a friendly place to chat with and get to know your fellow board participants.
Post Reply
48 posts

Holocaust exaggerator and fabricator, Samuel Willenberg the last surviving person who had worked at Treblinka 2 has died(February 16, 1923 – February 19, 2016)

...It was the final horror the then-20-year-old witnessed after years of unimaginable cruelty.
Now 91, and the sole survivor of the most astonishing escape of the Nazi death camps, he told of the moment 1,000 tried to flee Treblinka in August 1943. He was one of just 67 to survive, and the only one left alive.
'Suddenly, we heard a thunderous explosion from the garage. Tongues of fire soared over the trees coming from the gasoline drums that the prisoners had set alight'
'We all started screaming 'Hoooraaaah!' and running towards the border of the camp'.
As he ran, all Samuel could hear was machine gun fire from the Germans. 'It went 'Trrradadadadadam. I felt a bullet in my leg - I looked down as my shoe filled with blood. But I carried on running.'
Suddenly, a bullet hit the priest, a friend who was running beside him. Samuel said: 'He could run no more. He implored me, 'finish me off, please, just kill me. I told him, 'turn your head towards the gas chambers, where your wife and daughters were killed' - and I shot him. It was the only thing to do'.
Treblinka, in German-occupied Poland, has become a byword for astonishing cruelty and sadism, where 900,000 Jews were murdered there in just 15 months and where even a picture-perfect St Bernard dog was ordered to savage prisoner's genitals.


One of the more obvious exaggerations is the allegation by one eye-witness, Samuel Willenberg, that he saw a nude girl leap over a 3 meter (9 feet) high barbed wire fence in order to escape the gas chambers.

In his book Surviving Treblinka, witness Samuel Willenberg never mentions firewood in connection with the cremations in the “upper camp.” He speaks of a “woodcutter commando” working inside the camp, splitting tree trunks with axes, and also describes himself and another prisoner having a conversation behind “a large pile of cut logs,” but no deliveries of wood to the “upper camp” are mentioned.[34]
Likewise, Willenberg does not report on any transports of wood fuel to Treblinka II from the outside, despite describing in detail transports of other material to the camp.[35] The only kind of fuel mentioned by Willenberg in connection with the cremations – which he did not witness firsthand – is crude oil.[36]

It is worth noting that Glazar and Willenberg contradict each other when describing how the rails used for the “grills” (cremation grates) were procured. When interviewed by Gitta Sereny, Glazar stated that prisoners, possibly including him, were sent “into the countryside to forage for disused rails.”[37] Willenberg on the other hand writes that the rails were delivered to the camp with a train.[38]

Yankiel Wiernik, in his 1944 pamphlet A Year in Treblinka describes constructing stock houses and fences from trees apparently felled in the vicinity of the camp, but never mentions any tree-felling activity in connection with the cremations, which he claims to have witnessed first-hand. Wood is not even mentioned as a fuel by Wiernik.[39]
No tree felling in order to procure wood fuel for cremations is mentioned in Sereny’s book Into that Darkness, which contains alleged transcripts of interviews with Treblinka commandant Franz Stangl as well as statements by the Jewish witnesses Richard Glazar, Berek Rojzman, and Samuel Rajzman.
I have managed to find no testimonial evidence contradicting Glazar’s statement that the firewood used for cremations at Treblinka II was taken from wooded areas in the vicinity of the camp.

6. Summary and Conclusion
We know from documents that more than 700,000 – probably around 800,000 – Jewish deportees were sent to Treblinka II during its period of operation 1942-43. According to established historiography – which in the case is based almost exclusively on eyewitness testimony – this was a “pure extermination camp” where all Jews who arrived to the camp were killed in homicidal gas chambers within only a few hours, except for a handful of Jews selected to carry out work related to the killing process. The victims were initially buried, but starting March 1943 – or possibly on smaller scale in November 1942 – they were instead burned on cremation pyres. The buried victims were then exhumed and incinerated on the same pyres. This work was supposedly completed by the end of July 1943. The Treblinka II camp was completely dismantled in September 1943.
The witness Richard Glazar claims that the wood used to fuel the pyres was taken from “the woods around the perimeter of the camp.” Using real-life data from experiences with open-air incineration we can estimate with a high degree of certainty the amount of firewood that would be needed to incinerate the alleged number of corpses. This corresponds to approximately 3 square kilometers of forest. Realistically, however, this area would be much larger, as it follows from the chronology of Glazar’s testimony as well as established historiography that there would have been no time to season the wood. The cremation pyres would therefore have had to use “green” wood as fuel, which is less efficient than seasoned wood due to its higher moisture content.
By comparing a detailed 1936 map of the Treblinka area with air photos taken by the Luftwaffe in May and November 1944 we are able to estimate the scope of contemporary deforestation in the area. If 870,000 bodies had really been burned at Treblinka, then the procurement of the required fuel would have denuded the entire wooded area north of the camp site. The air photos show that this is clearly not the case. Rather, the visible possibly deforested areas – amounting to less than 10 hectares – indicate the cremation of at most some ten thousands of bodies.
The argument that perhaps the witnesses are wrong, and only a fraction of the corpses were burned, does not hold up, since the Soviet and Polish forensic examinations carried out in the period 1944-1945 would then have discovered hundreds of thousands of unincinerated corpses at the former camp site and subsequently announced their findings to the world as the ultimate proof of “German-Fascist” barbarism. Needless to say, they didn’t.[40] There only remains the conclusion that a small percentage of the Jewish deportees died en route to the camp and that the remainder where sent somewhere else, most of them likely to occupied USSR territory. The witness Richard Glazar has thus inadvertently helped confirm the revisionist hypothesis that Treblinka II was a transit camp.

3 meters is almost 10 feet not 9. So an even greater exaggeration.
Top

3 meters is almost 10 feet not 9. So an even greater exaggeration.

Porno-Sadism is a common theme in Holohoax histiography.
Top

Even in death this man cannot escape the insults and bile spewing from the keyboards of sick individuals posing as 'revisionists' .

What an absolute shower of shit you all are.
All I want for Christmas is a Dukla Prague away kit
Top

3 meters is almost 10 feet not 9. So an even greater exaggeration.

Porno-Sadism is a common theme in Holohoax histiography.

I often wonder at the upbringing these scum received. I can only conclude that it was far from adequate, and probably involved some form of trauma or abuse. No excuse to behave like a savage though, especially with the developments in medicine and psychiatry these days.
All I want for Christmas is a Dukla Prague away kit
Top

From Willenberg's Obit in the Guardian...


Willenberg described in 2010 how he had been shot in the leg as he climbed over bodies piled at the barbed wire fence and catapulted over. After the war he moved to Israel and became an artist

He "catapulted over"...WTF does that mean?

What makes Willenberg a "hero"?
Top

See here for a sudden flash of Daily Mail's light unto the nations series...http://www.dailymail.co.uk/news/article ... -camp.html
Top

rollo the ganger wrote:Porno-Sadism is a common theme in Holohoax histiography.

I often wonder at the upbringing these scum received. I can only conclude that it was far from adequate, and probably involved some form of trauma or abuse. No excuse to behave like a savage though, especially with the developments in medicine and psychiatry these days.

I'm simply making an observation of an established fact: 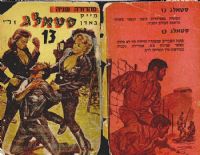