The main purveyors of Islamophobia

The RODOH Lounge is a place for general discussion, preferably non-Holocaust. The Lounge is only lightly moderated but please keep this a friendly place to chat with and get to know your fellow board participants.
Post Reply
376 posts

The main purveyors of Islamophobia

http://www.alternet.org/world/follow-mo ... t-or-wrong
"When people who are honestly mistaken learn the truth,
they either cease being mistaken
or they cease being honest"
-- Anonymous
Top

This isn't about "defending"'any sort of 'radical' anything.

This is about the campaign to present moslems as the greatest threat to world peace and who is chiefly behind the campaign, who is fueling it and who benefits from it. The campaign has been increasing in intensity and success since the eighties.

Its a self-fulfilling prophecy that benefits one nation who are famous for false-flag attacks and for fomenting proxy wars were others fight their battles for them.

Even Jewish organisations recognise and acknowledge this Jewish/Israeli backed campaign of Islamaphobia.


1. Why is it important to understand the links between Islamophobia and Israel politics?
Islamophobia plays a key role in building and sustaining public and U.S. government backing for Israel.
The U.S. “war on terror” overlaps with the U.S. alliance with Israel. Many within and outside the Jewish community view the U.S. focus on the domestic and global “war on terror” as integral to ensuring Israeli security and maintaining the United States’ “special” relationship with Israel. Islamophobia shapes, and is shaped by, an interventionist U.S. foreign policy and support for Israeli policies.


2. 'clash of civilisations' rhetoric
An impetus for the view that Muslims are enemies of Israel and “the West” came from the introduction in 1990 and the subsequent popularisation of the term “clash of civilisations”: the idea that “Western civilisation” is locked in an implacable battle with Islam resulting from fundamental cultural differences, and not from history, politics, imperialism, neo-colonialism, struggles over natural resources, or other factors.
The virulently anti-Muslim “clash of civilizations” concept views more than a billion Muslims as belonging to a monolithic, insular, inherently backward, violent, and inferior culture that cannot be changed. It provides an ideological foundation for both the “war on terror” and the militantly pro-Israel belief that “the West” must back Israel, because of “fear of large Muslim minorities–unassimilated and un- assimilable...”

3. Are there financial connections between Islamophobia and adamantly pro-Israel politics?
Many funders of the country’s most prominent Islamophobes also finance U.S.-based groups that espouse hardline Israeli polices and, in some instances, back West Bank Israeli settlers. Almost all of these groups spread anti-Muslim/anti-Arab hate through public statements of support for Israeli policies that range from hawkish to staunchly pro-settler.
Among the many groups that receive significant financial support from funders of the nation's Islamopho- bia network are: StandWithUs, which has sued BDS supporters and issued a comic book featuring Captain Israel that depicts Palestinians as vermin; and the Zionist Organization of America (ZOA), whose leaders see Palestinians as having a “shocking difference in values from ours in America and the West.” Such dehumanizing stereotypes are central to both Islamophobia and the right-wing pro-Israel narrative.

Etc., etc.
See more here:
https://jewishvoiceforpeace.org/wp-cont ... ia-FAQ.pdf
"When people who are honestly mistaken learn the truth,
they either cease being mistaken
or they cease being honest"
-- Anonymous
Top

Here is one of the people being accused of Islamophobia in the first article been-ther links to;

"Arguably one of the most well known Islamophobes, Steven Emerson has proven to be highly influential as well. The goals of Steven Emerson’s organization, the Investigative Project on Terrorism, are to investigate, analyze and expose Muslim infiltration in the United States. The organization claims to be “one of the world’s largest storehouses of archival data and intelligence on Islamic and Middle Eastern terrorist groups.”

The problem here is not understanding that the study of certain terrorist groups within a religion does not mean the person studying is anti that religion.

This is another Jew baiter thread because the aim is clearly going to be cherry picking evidence to say it is the Jews who are stirring up Islamophobia and not as claimed "This is about the campaign to present moslems as the greatest threat to world peace and who is chiefly behind the campaign, who is fueling it and who benefits from it."

There is a deliberate main-stream mass-media campaign of fear-provoking and of demonising muslims.

Jewish and Christian communities and societies DO NOT receive the same demonisation campaigns, for people like Anders Breivik, etc.

https://en.m.wikipedia.org/wiki/Israeli ... ace-sm.JPG
The media wouldn't tolerate the same kind of campaign against Jews and criticising Jews worldwide for the routine and daily acts of radical Judaism as the one shown at the link above.

Look at this following example of a racist, anti-islamic media campaign in Sweden. The guy was not hiding in anyway, had a Facebook account, had his name displayed at the address where he lived, was known to his local authorities, etc., etc. Cui bono? Who benefits from such a high profile media-campaign telling the population that there is a dangerous man hiding in their midst?

We ended up in a mass psychosis. We stopped thinking critically. Sapo made us complicit in scaring the wits out of Sweden, even school children were fearful, the whole thing was absurd."

In an unusual move for Sweden, most mainstream media, including Linderborg's employer, published the man's picture and name, despite a press tradition of treating suspects as innocent until proven guilty.
http://www.aljazeera.com/indepth/featur ... 14236.html

Then we have all these governments rattling on and on about 'islamic terrorism' to justify wars in the middleast, while never mentioning their support of islamic 'terrorist' factions for creating regime-change more favourable to Israel and western oil pipelines, geo-political interests, etc., etc. Cui bono?

Then there's that story about a pre-school teacher attacked and cut on the neck by a ISIL Daesh supporter in Paris which was — and still is — all over the internet. It turns out the teacher was forced to admit he lied. He made it up and slashed himself.
http://www.bbc.com/news/world-europe-35091362
The media is looking for these types of story and pumping them up and asking us to be afraid/indignant/outraged.
And even when they are forced to teract the story they STILL end with a reference to a previous attack at a school in France
When they could have more appriately ended with a previous case of the same kind of incitement against moslems with a Jewish rabbi self-mutilating and inventing an attacks such as this Farhi case that you can't even find online. But they didn't emphasise that angle, did they?
See the pattern?

In this modern instant-media, instant news environment its a very simple thing to start small fires of fear and anger and once a fire starts to go out start another one up and watch it spread. Doesn't matter if it turns out the people were innocent or the action was just a mentally ill person: the 'message' is out there and can't easily be withdrawn/corrected in the public imagination.

Thankfully more and more people are seeing through the lies, deceptions and relentless spin:

Here some of the mythology gets a rare dismantling on live US TV:
But look who this major news network got to paint the other side of the picture. They got two clips from the same racist demagogue and thus got his message even more air-time and exposure. Thankfully the stupid anchors on that occassion got a real drubbing by a brilliant fluently-english-speaking moslem:

This false anti-moslem news story is still online at BBC News. Its completely false though. So... why hasn't the BBC removed it? Or linked to a retraction of the false accusation? Try and find a main-stream western news outlet that carries the retraction of this story. I couldn't.
With the case of the recent lying pre-school teacher,also inventing a radical islamic attack, you'd think this would be relevant. Wouldn't you? So... Why don't western journalists and news editors remind us of this? Why is this story so hard to find on western main-stream media sites?

Y'see it is permitted and orchestrated to have campaigns demonising and criticising islam, moslems, sharia law and Islamic jihad, etc. But it is NOT PERMITTED to do the same for Judaism, Jews, rabbinic law, and sayanim assassination squades, etc.
"When people who are honestly mistaken learn the truth,
they either cease being mistaken
or they cease being honest"
-- Anonymous
Top

You make a valid point here been-there. However, your message should include something like "and neither Islam or Judaism belong here". Can you imagine what a wonderful life we could have without those two elements? I can, sure, just by thinking back on my childhood. The first time I ever saw a Negro I was astounded and asked my mother a peculiar question and it visibly made her embarrassed as the other people nearby, and likely the Negro too, heard my comment

I have zero issue with other peoples, as long as they live in their own homelands. We do not need them here. It will be our undoing, you will see in due time been-there. 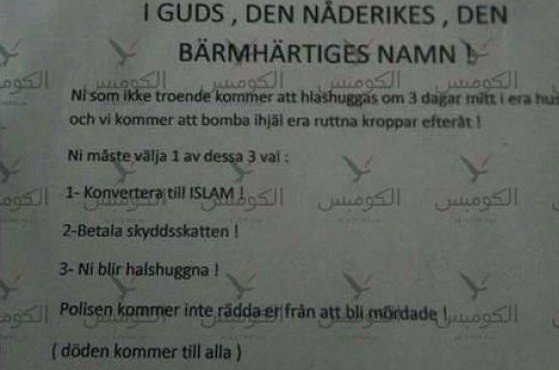 
been-there wrote: Y'see it is permitted and orchestrated to have campaigns demonising and criticising islam, moslems, sharia law and Islamic jihad, etc. But it is NOT PERMITTED to do the same for Judaism, Jews, rabbinic law, and sayanim assassination squades, etc.

Here is an antidote to the Islamaphobic campaign:

https://m.facebook.com/story.php?story_ ... =bookmarks
"When people who are honestly mistaken learn the truth,
they either cease being mistaken
or they cease being honest"
-- Anonymous
Top

Going by the comments, many have misunderstood what she has said. She means do not tar all Muslims as terrorists and speak as if Islam is a terrorist organisation. In the Channel 4 interview she was asked about Trumps comments and said;

"I can just highlight one thing. The more you speak about Islam and against all Muslims, the more terrorists we create. So it's important that whatever politicians say, whatever the media say, they should be really, really careful about it. If your intention is to stop terrorism, do not try to blame the whole population of Muslims for it because it cannot stop terrorism. It will radicalise more terrorists."
Consistency and standards in evidencing viewtopic.php?f=13&t=2721#p87772
My actual argument viewtopic.php?f=13&t=2834

Scott - On a side note, this forum is turning into a joke with the vicious attacks--and completely unnecessary vitriol--that everybody is making upon each other.
Top
Post Reply
376 posts