What is so special about 'Jewish' suffering?

The RODOH Lounge is a place for general discussion, preferably non-Holocaust. The Lounge is only lightly moderated but please keep this a friendly place to chat with and get to know your fellow board participants.
Post Reply
322 posts

Hypocrisy thy name is Zion

There is a tendency on the part of major Jewish groups in the United States and in Europe to discover what they describe as anti-Semitism wherever one turns. Last month, a statue of the well-known and highly respected 18th century French writer and political philosopher Voltaire was removed from outside the Académie Française in Paris. Voltaire was a major figure in the “Enlightenment,” during which what we now call science and applied rationalism challenged the authority of the church and the King.

The statue had recently been vandalized by the French version of Black Lives Matter (BLM) because Voltaire had reportedly invested in the French East India Company, which engaged in the triangular trade between Europe, Africa and the New World. The commodities included Africans who were destined to become slaves in the European colonies. Beyond that Voltaire, a man of his times, believed blacks to have “little or no intelligence” and also considered Jews to be born “with raging fanaticism in their hearts.”

Voltaire was reportedly much admired by Hitler, so perhaps it would not be off base to suggest that in France, where the Jewish community is extremely powerful while Africans are not, it was Voltaire cast as the anti-Semite that consigned his statue to a government warehouse never to be seen again. By that reasoning, one expects that the world will soon have a ban on the music of Richard Wagner and Ludwig van Beethoven as they too were admired by Hitler.

The idea that someone can change history by ignoring aspects of it means that school textbooks are being rewritten at a furious pace to make sure that there is overwhelming coverage of the holocaust and black achievement. Also, the erasing of monuments is being pursued with singular intensity in the United States, where the Founding Fathers and other dead white males are being one by one consigned to the trash heap. Doing so, unfortunately, also destroys the learning experience that can be derived from using the monuments as visual mechanisms for confronting and understanding the mistakes made in the past. A commission set up by the mayor of the District of Columbia has, for example, compiled a hit list of monuments and commemorations that must be either removed, renamed or placed into “context.” It includes the Jefferson Memorial and the Washington Monument. The name “Columbia” is, of course, certain to be changed.

Interestingly, Jewish groups in the United States have been in the forefront in supporting BLM’s apparent mission to upend what used to pass for America’s European-derived culture. Ironically, that culture includes free speech, democracy and mercantilism, all of which have greatly benefited Jews. The narrative is, of course, being wrapped around the common cause of blacks and Jews together fighting against the alleged white nationalists who are being blamed by the media for much of the violence taking place even when videos taken at the scenes of the rioting definitely show nearly all black mobs doing the arson and looting.

And blacks who are skeptical of the Jewish role are quickly put in their place, as was Rodney Muhammad of Philadelphia, who was removed from his executive position with the NAACP after expressing skepticism about all the Jewish friends that blacks suddenly appeared to be acquiring, quoting an observation often attributed to the now disgraced Voltaire on a Facebook entry, “To learn who rules over you, simply find out who you are not allowed to criticize.”

The lead organization in shaping the acceptable narrative is the Anti-Defamation League (ADL), which promotes itself as “Fighting Hate for Good.” In other words, anyone on the other side of the narrative is by definition a “hater.” ADL apparently advertised an online discussion topic for August 28th, shortly after the shooting incident in Kenosha Wisconsin that killed two white men and injured a third. The headline reads “Why all white American middle schoolers must publicly condemn the Anti-Semitic murders by white supremacist Kyle Rittenhouse.” 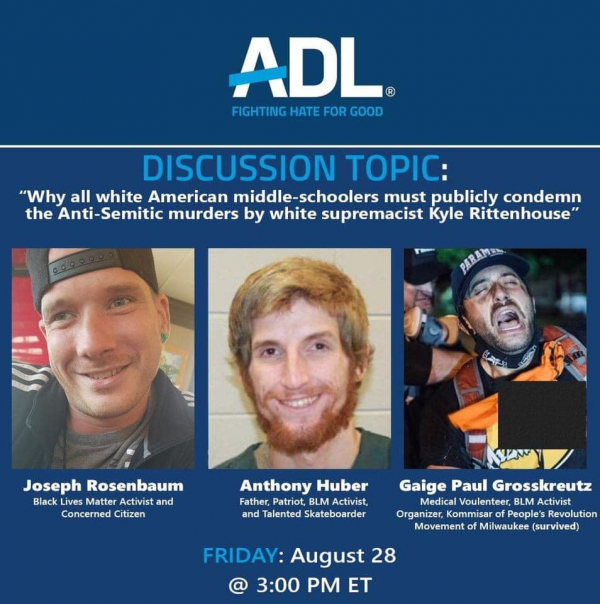 If the ad is indeed genuine, one notes immediately that the killings are being framed as anti-Semitism without any actual evidence to suggest that anything like that was involved or that the shooter knew the religion of those who were confronting him. All three of the “victims” are described as BLM supporters, which they apparently were, but it ignores the fact that they were also Antifa activists and all three had criminal records involving violence. One of them, Joseph Rosenbaum, is, to be sure Jewish, and also a pedophile, and the other two might also be Jews if ADL is correct, but that does not seem to have been material in what took place. Credible accounts of the shooting suggest that Rittenhouse was attacked by the three, one of whom, Grosskreutz, had a gun, and was being beaten on his head with Huber’s sidewalk surfboard. He responded in self-defence.

And ADL is not alone in its defence of BLM. More than six hundred Jewish groups have signed on to a full page newspaper ad supporting the movement. The ad says “We speak with one voice when we say, unequivocally: Black Lives Matter” and then goes on to assert “There are politicians and political movements in this country who build power by deliberately manufacturing fear to divide us against each other. All too often, anti-Semitism is at the center of these manufactured divisions.”

So, once again, it is all about the perpetual victimhood of Jews. That Jews constitute the wealthiest and best educated demographic in the United States would seem to suggest that they are especially favoured, which they are, rather than targeted by raging mobs of hillbillies. More than 90% of discretionary Department of Homeland Security funds goes to protect Jewish facilities and the Department of Education and Congress are always prepared to create new rules protecting Jews from feeling “uncomfortable” in their occasional interactions with critics of Israel.

Jews largely think and vote progressive, which is part of the reason for aligning with blacks even though rioting and looting is likely to affect them more than other demographics as many of them might still have businesses in the cities that are most likely to be hit. But there is also a much bigger reason to do so. Many blacks in BLM as well as progressive white supporters were beginning to suggest that the movement should broaden its agenda and recognize inter alia the suffering of others, to include the Palestinian people. A strong show of support from Jewish groups, backed up by what one might presume to be a flow of contributions to the cause, would presumably be a way of nipping that sentiment in the bud just as Jewish donors to the Democratic Party were able to block any language in the party platform sympathetic to the Palestinians.

It is of course the ultimate irony that Jewish groups are very sensitive to the suffering of blacks in the United State while at the same time largely ignoring the war crimes and other devastation going on in Israel and Palestine at the hands of their co-religionists. The beating and shooting of unarmed and unresisting Palestinians, to include children, the destruction of the livelihoods of farmers, and the demolition of homes to make way for Jewish settlers is beyond belief and is largely invisible as the Jewish influenced U.S. media does not report it. It is, simply put, genocide. And on top of that, Israel has been bombing defenseless civilians in Gaza nearly daily of late, attacking and destabilizing Lebanon and Syria, and also conniving with American Secretary of State Mike Pompeo to go to war with Iran.
It should not be surprising if black groups would be suspicious of the motives of the Jewish organizations that suddenly seem to want to be friendly. When Rodney Muhammad was removed from his position with the NAACP in Philadelphia, Jonathan Greenblatt, the head of ADL, tweeted “Credit to Executive Committee of Philly NAACP & National NAACP for taking action here. We hope this will enable new opportunities for collaboration as the local Black & Jewish communities can do more to fight against hate & push for dignity of all people.”
Greenblatt has been a leader in the fight to criminalize both criticism of Israel and also the free speech being exercised by supporters of the non-violent Boycott, Divestment and Sanctions movement (BDS). For him, “dignity of all people” clearly does not include Palestinians or even anyone who peacefully supports their cause.

https://councilforthenationalinterest.o ... e-is-zion/
"When people who are honestly mistaken learn the truth,
they either cease being mistaken
or they cease being honest"
-- Anonymous
Top

been-there wrote: ↑
Sat Aug 22, 2020 9:59 am
Some members said their right to worship had been violated by offensive signs that caused emotional distress. (