What is so special about 'Jewish' suffering?

The RODOH Lounge is a place for general discussion, preferably non-Holocaust. The Lounge is only lightly moderated but please keep this a friendly place to chat with and get to know your fellow board participants.
Post Reply
314 posts

?
Here's another news story of yet another person who self-identifies as being 'Jewish' and who invented a false 'anti-semitic' attack.

He told police he was stabbed for being Jewish

A 26-year-old man faked his own stabbing at the West Bloomfield synagogue where he worked and then reported he was attacked because of his Jewish faith, authorities say. Now Sean Samitt is facing a felony charge of filing a false police report, according to West Bloomfield Police.

Samit reported he was attacked and stabbed in the abdomen by an unknown man in the parking lot at the Temple Kol Ami, where he worked as a cantorial soloist, which is a music director. He reported the crime on Dec. 15, telling police that he was confronted about 7 p.m. as he was leaving work by a white male in his late 30s to early 40s.
Samitt said that the alleged attacker shouted, "You Jews!" and said "too many immigrants are here," according to the police report obtained by the Free Press through a Freedom of Information Act request.

Samitt told officers that he was punched in the chest and abdomen during the encounter and he feared for his life, the report said. He said he escaped by kneeing the attacker in the groin and pushing him away, then drove himself to Henry Ford Hospital where a security staff called local authorities about the attack.

Police said officers searched the parking lot for a weapon, blood or any other piece of evidence but came back negative. K-9 officers were not able to locate a scent on the suspect.

While searching Temple Kol Ami, detectives found bloody tissues in Samitt's office and the men's bathroom. They also located a knife in the kitchen area with blood on the tip of the blade.

Suspecting Samitt's wounds were self-inflicted, officers obtained surveillance footage from a house across the street and confirmed that no assault took place.

.
The suffering of the abstract tribe
is regarded as ‘unique’ and ‘special’
in the minds of those
who have been conditioned to believe
that they belong to it.
.
.
.

We all know TV celebrities are expected to be entertaining and emotive when they do these 'reality' TV shows. Well, of course — who wants to watch a blank expression.
I'm sure they are primed before the cameras are started: "Show us what you are feeling!!! It's a TV programme for pity's sake".

So remember, Stephen is getting paid here for this public emoting, for providing us with gripping/entertaining TV. As Prof Norman Finkelstein observed, it's a racket, a shake-down. It's a sordid 'industry'.

I find it disgusting and puke-worthy. He should be ashamed!

.
Remember THE Holocaust™ and feel sympathy for poor Ghislaine Maxwell.

C'mon people. Don't forget her family has 'holocaust' connections and has suffered already.
So she deserves our sympathy.

As this recent news article in the British newspaper 'The Times' reminded its readers: 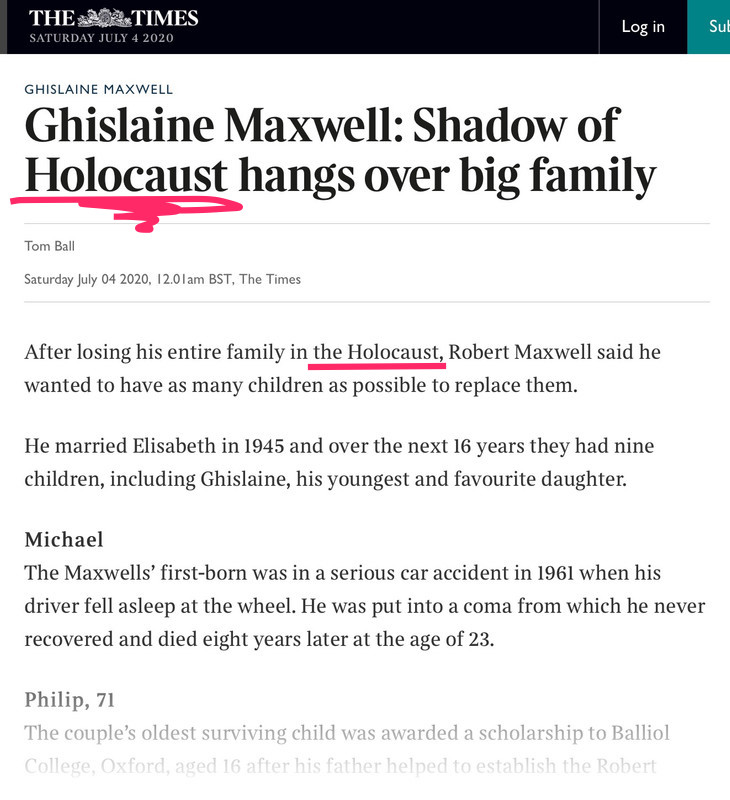 So, her father Robert Maxwell.
That was not his name from infancy. He had been born Jan Ludwig Hoch in Czechoslovakia and later took the name Ian Robert Maxwell.
Private Eye nicknamed him “the bouncing Czech”.
One of his daughter-in-laws named Pandora reportedly referred to her father-in-law as “the fat fraudster”.

He was born into a poor Yiddish-speaking Orthodox Jewish family in the small town of Slatinské Doly (now Solotvyno, Ukraine) in the easternmost province of pre-World War II Czechoslovakia.
He later became a British intelligence agent who used the alias Ivan du Maurier. And that is from an article in the Jew York Times. But what they don't mention there is that he was a Mossad agent who was given a state funeral in Israel attended by a host of Israeli politicians led by then Prime Minister Yitzhak Shamir and President Chaim Herzog. This despite the fact that he was a criminal who had stolen hundreds of millions of pounds from his own companies' pension funds ruining the old age of many individuals.
According to Wikipedia Maxwell had known links to the British Secret Intelligence Service (MI6), to the Soviet KGB, and to the Israeli intelligence service Mossad. Six serving and former heads of Israeli intelligence services attended Maxwell's funeral in Israel, while Israeli Prime Minister Yitzhak Shamir eulogized him and stated: “He has done more for Israel than can today be said”.

But it has also been said that Mossad killed him because he demanded Israel provide him a loan to bail him out of his fraud case and devastating bankruptcy. They refused and he threatened to retaliate by spilling state secrets so they apparently killed him and made it look like a suicide. Shades of Epstein.


A book claims that the man who raided the pension fund of what was Mirror Group Newspapers to prop up his ailing media empire was a Mossad agent, who also had links to organised crime.
The book 'Robert Maxwell, Israel's Superspy' due out in December alleges that Mossad got rid of Maxwell -- who apparently fell from his yacht, the Lady Ghislaine, and drowned in 1991 — after he threatened to blackmail Mossad and reveal secrets.

Maxwell is claimed to have asked the Israelis for money to stop his network of businesses from going under in return for his silence. His business was more than £3bn in debt and he desperately needed cash.

The book, written by Matt Dillon and Gordon Thomas, is to be published by Carroll & Graf and is not the first to claim Maxwell had links with Mossad.
Not long before he fell overboard off the Canary Islands, US journalist Seymour Hersh published a book alleging such links.

After his death, his business empire collapsed and a complex web of financial deceit was revealed that almost sank the Daily Mirror.

The new book is based on interviews with former intelligence agents from the UK, US and from Israel.
According to the book, Maxwell had been expecting to receive a payment from Mossad and his anchored yacht was waiting to rendezvous with Israeli agents. Instead, he was murdered and dumped overboard.

At the time, Mirror Group editorial director Charles Wilson said he could not imagine any situation that would cause Maxwell to take his own life: "He had too much of the arrogance of his own ability to conceive of such a thing."

What is true is that Maxwell, a Czech Jew who fought for the British in the Second World War and became a Labour MP in the 1960s, was connected at the highest levels in the US, Israel and in the former Soviet Union.

'Ghislaine is protected. She and Jeffrey were assets of sorts for multiple foreign governments. They would trade information about the powerful people caught in his net — caught at Epstein's house'.

Maxwell, 58, has been accused in lawsuits of procuring underage girls for Epstein to sexually traffick among his wealthy and powerful friends, and is reportedly the subject of an ongoing FBI probe.
https://www.dailymail.co.uk/news/articl ... srael.html