The RODOH Lounge is a place for general discussion, preferably non-Holocaust. The Lounge is only lightly moderated but please keep this a friendly place to chat with and get to know your fellow board participants.
Post Reply
414 posts 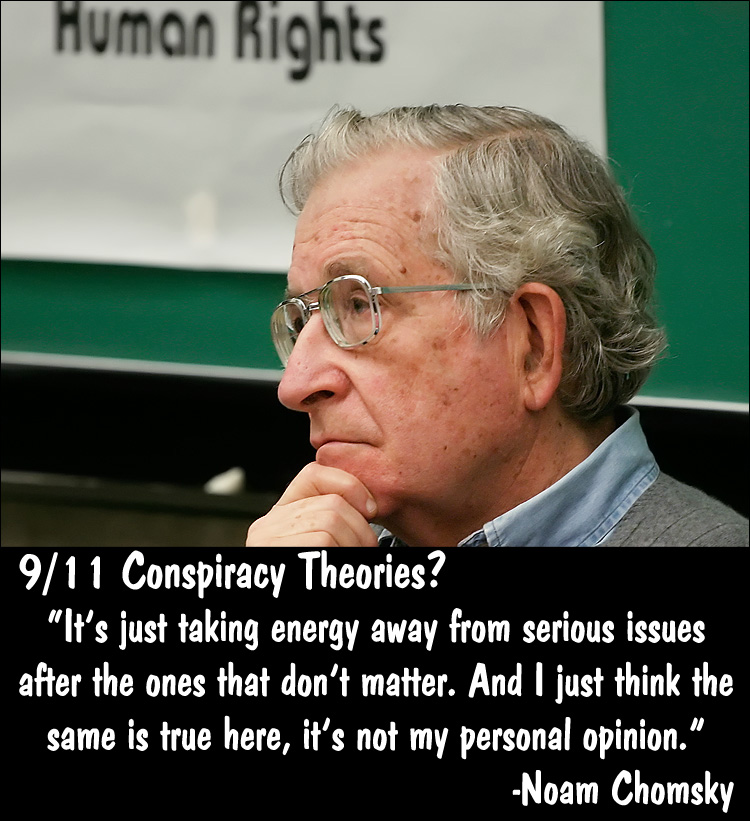 Yes. I agree. Which I find disappointing, as I am a great admirer of most of his utterances and insights.
"When people who are honestly mistaken learn the truth,
they either cease being mistaken
or they cease being honest"
-- Anonymous
Top

.
“the currently accepted 'Holocaust' narrative
is NOT a clearly defined historical fact
but is a dogma that has been arrived at
by suppressing the normal path-ways
of critical thinking.”

.
"Picture yourself on a train bound for Auschwitz
Where thirty-foot Germans eat formaldehyde pies.
You swallow your pride and your diamonds quite slowy
And extract them from your shit-coated lies.

.
“Until thirty years ago, Communist rule
over the USSR and its Warsaw Pact allies
seemed absolutely permanent and unshakeable,
but the roots of that belief had totally rotted away,
leaving behind nothing more than a hollow facade.
Then one day, a gust of wind came along,
and the entire gigantic structure collapsed.
I wouldn’t be surprised if our current Holocaust narrative
eventually suffers that same fate,
perhaps with unfortunate consequences
for those too closely associated
with having maintained it.”

Re: Quote of the day:

-- Noam Chomsky wrote:“The ability to ignore unwanted facts is one of the prerogatives of unchallenged power.
Closely related is the right to radically revise history.”

The lesson of 'the Holocaust' isn't that tyrannical power and institutionalised racial prejudice is dangerous.
Though that is the lie we have all been indoctrinated with.
The actual lesson is that victors of war engaging in lying, torture, show-trials, psy-op propaganda — all protected with a tyrannical suppression of criticism and honest historical investigation — is dangerous.
Top

Rigorous, analytical, critical, historical revision is permitted — even encouraged — in all areas of currently accepted history... except one.

That fact alone demonstrates the disconnect from reality that has allowed this one topic to become not only a 'sacred' quasi-religion, but to be a political 'hoop' that all politicians who seek high office and a postive mention in future history books must jump through.

And who is making them jump through this 'hoop'?
That question and its answer is not permitted to be mentioned.

Deniers build their pseudo-arguments on traditional anti-Semitic stereotypes and imagery. They contend that Jews created the myth of the Holocaust in order to bilk the Germans out of billions of dollars and ensure the establishment of Israel. Once again the devious Jews have harmed innocent multitudes—Germans and Palestinians in particular—for the sake of their own financial and political ends. To someone nurtured by the soil of anti-Semitism, this makes perfect sense. 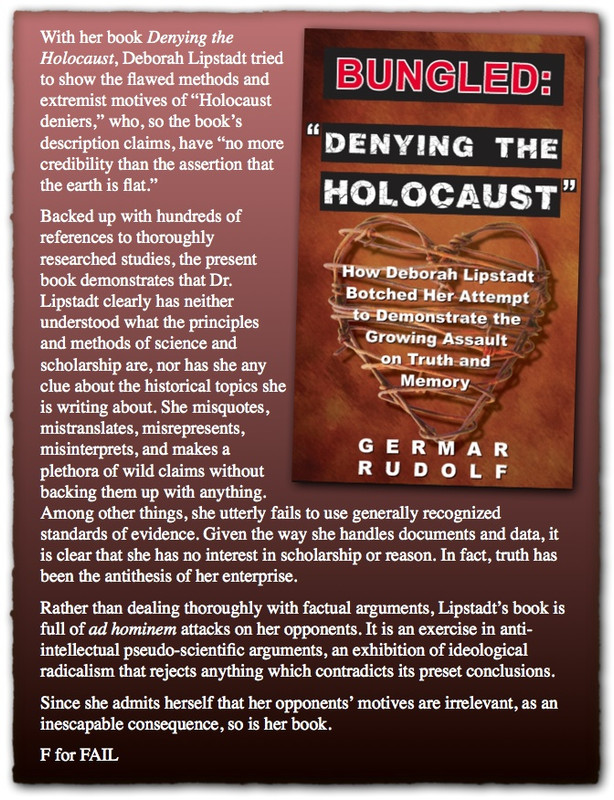 With her book Denying the Holocaust, Deborah Lipstadt tried to show the flawed methods and extremist motives of “Holocaust deniers,” who, so the book’s description claims, have “no more credibility than the assertion that the earth is flat.”

This video documentary is based on the book Bungled: “Denying the Holocaust.” How Deborah Lipstadt Botched Her Attempt to Demonstrate the Growing Assault on Truth and Memory,” which is available from the publisher's website or wherever books can be bought; check here for the best prices.

Both this documentary and the book demonstrate that Dr. Lipstadt clearly has neither understood what the principles and methods of science and scholarship are, nor has she any clue about the historical topics she is writing about. She misquotes, mistranslates, misrepresents, misinterprets, and makes a plethora of wild claims without backing them up with anything. Among other things, she utterly fails to use generally recognized standards of evidence. Given the way she handles documents and data, it is clear that she has no interest in scholarship or reason. In fact, truth has been the antithesis of her enterprise.

Rather than dealing thoroughly with factual arguments, Lipstadt’s book is full of ad hominem attacks on her opponents. It is an exercise in anti-intellectual pseudo-scientific arguments, an exhibition of ideological radicalism that rejects anything which contradicts its preset conclusions.

Since she admits herself that her opponents’ motives are irrelevant, as an inescapable consequence, so is her book.

The transcript of this presentation, enriched by source references, links to more information and a subtitle file for downloading, can be found here.
"When people who are honestly mistaken learn the truth,
they either cease being mistaken
or they cease being honest"
-- Anonymous
Top

If any literary agent, publisher, editor or screenwriter were to seek my advice, it would be this: if any purported Holocaust memoir from a Polish Jew sounds like fiction, it probably is.
https://cobylubliner.wordpress.com/2008 ... ther-hoax/

We were all experiencing the War, a many-fronted war, ... I have not been able to accept the singling out of this one front, horrible as it may have been, as a unique epoch-making event that requires its own grandiose name, its own capitalised dictionary entry, its own academic discipline called “Holocaust studies.” It is in this sense that I count myself as a Holocaust denier.

I have a rule of thumb that I have followed for sixty years: any Polish Jew’s account of his or her experiences during World War II must be taken with a grain of salt.

Coby Lubliner wrote:Confessions of a `Holocaust Denier' by Coby Lubliner,
a jewish person who is what is called a “Holocaust survivor.”

What I question (and that’s why I have put quotes around “Holocaust survivor”) is the appropriateness of labeling the experience that I survived (six years of imprisonment in ghettos, labour camps and concentration camps as a child during World War II) — an experience that was, to me, simply a part of the War — as part of something that, for me, did not exist until it was invented in the late 1950s and never seemed anything but a pretentious literary metaphor for what was supposedly a unique experience of Jewish suffering.

...Ever since, for over half a century, I have not been able to accept the singling out of this one front, horrible as it may have been, as a unique epoch-making event that requires its own grandiose name, its own capitalised dictionary entry, its own academic discipline called “Holocaust studies.” It is in this sense that I count myself as a Holocaust denier.
Now, when it comes to assessing the totality of the European Jewish experience of World War II — as opposed to an individual experience — a survivor’s opinion should weigh no more nor less than anyone else’s.

...in my memory at least, the Holocaust as a subject of worldwide interest did not emerge until the sixties, with the Eichmann trial as beacon. I don’t recall being aware of Elie Wiesel and his cohort until, perhaps, the late 60s.

I first encountered the word “Holocaust” in the title of a book published in 1965: Holocaust and Rebirth, Bergen-Belsen, 1945-1965(2). The book is of some personal interest to me, since I spent the last months of the War, after Buchenwald, in the Bergen-Belsen concentration camp, and several years after the War as a resident of the DP camp there; my name and youthful pictures can be found in the book.