The RODOH Lounge is a place for general discussion, preferably non-Holocaust. The Lounge is only lightly moderated but please keep this a friendly place to chat with and get to know your fellow board participants.
Post Reply
998 posts

been-there wrote: ↑
Fri Jun 19, 2020 9:20 am
But Scott, you would presumably admit you have a considerable prejudice against ALL Afro-Americans.
Yes?
Everything you write is in support of why that prejudice is totally justified as in your opinion they are all lesser human beings? Correct?
So basically, your argument is that anyone else who shares your opinion of Afro-Americans and treats them unlawfully is acting properly as they nearly all "deserve" it. Right?

No, he says Blacks are unusually jittery around authority and if anything cops give them a free pass that White men do not routinely get. For some reason - lying for your ideology - you don't seem to be able to reproduce that accurately.

Propagandized area man from Sweden been-there knows better but tactically pretends not to understand that lying to law enforcement or resisting arrest is a crime, that Blacks do it all the time, and that the system routinely forgives it - especially their lying - because, if for nothing else, it would completely overload it. If an impartial board reviewed all law enforcement bodycam footage and was told to charge every crime captured on camera, things would be quite dire for a lot of Blacks.

Propagandized area man from Sweden been-there has been told how homicidal and violent Blacks are, and knows that with lax enforcement in the street they'd be even more so. https://www.unz.com/isteve/how-much-more-homicidal-are-blacks-than-whites-7-4x-more-like-the-obama-administration-said-or-11-7x-more/

Propagandized area man from Sweden been-there doesn't care about the consequences of the system's rhetoric, even to his precious Black lives. https://www.startribune.com/9-people-shot-in-separate-shootings-across-mpls-continuing-violent-streak/571320632/

Propagandized area man from Sweden been-there probably does not understand that Black women also commit a disproportionate amount of crime that's swept under the rug for the sake of comity and chivalry and to prevent a visceral reaction to "Whitey" mass-imprisoning Black women.

Propagandized area man from Sweden been-there probably does not understand that the criminal justice system allows Blacks to routinely plead to a lower offense, falsifying the court record, and then social justice warriors such as himself swoon over how a beleaguered Black man who did almost nuffin gets a high sentence, when in fact it would have normally been way higher had the full suite of offenses been on the record, charged as such.

Shared humanity, to the extent that that's even an important thing, isn't grounds to live with an unusually violent group that doesn't like you. Or to tolerate their terrible behavior. Or, worse, to tolerate vicious anti-White propaganda disseminated to create discord among Whites and to incite violence by that group and others against White people.
Top

They always have the most lively vigils.

Interesting, didn't know you could do that to police.
Top

A white cop was shot in New Zealand by a Polynesian, many of whom were involved in DLM protests within the country.
While many Polynesians grieve for the death of this 28 year old man, there will be no marches in protest.

Huntinger wrote: ↑
Sat Jun 20, 2020 7:17 am
A white cop was shot in New Zealand by a Polynesian, many of whom were involved in DLM protests within the country.
While many Polynesians grieve for the death of this 28 year old man, there will be no marches in protest...

And that is how it should be.

You really don't understand why???

What I think on this issue is irrelevant; what is relevant is the comments many people are making in that country on Social Media. The perpetrator was apparently high on N,α-dimethylphenethylamine.
It would seem there is a distinction; white cop kills black man, black man kills white cop; two very different public responses, two very different countries. One response in the US sets buildings on fire, rioting, looting and more murder while the other in Aotearoa is treated with the appropriate dignity; the alleged offender treated as innocent but held to account.

Looks like the stepmother of the White Atlanta cop accused of murder in the Brooks shooting has been fired from her job.

Stepmother of Atlanta cop in Rayshard Brooks shooting fired from her job.


It is an anti-White mob society now─like something out of the Turner Diaries or the "Two-Minutes of Hate" in Orwell's 1984.

Being White "creates a hostile work environment for many employees."

Scott wrote: ↑
Sat Jun 20, 2020 11:41 am
Looks like the stepmother of the White Atlanta cop accused of murder in the Brooks shooting has been fired from her job.

Who's next, her mailman? Perhaps the doctor who delivered, sorry, "enabled", him?
Top 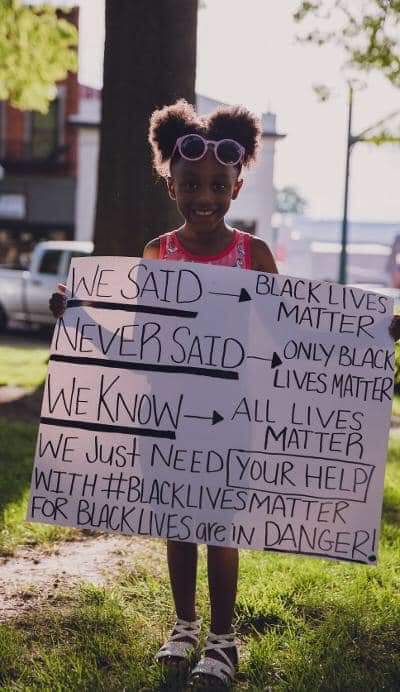 This child should be playing with her friends and not tarted up as cheap propaganda. 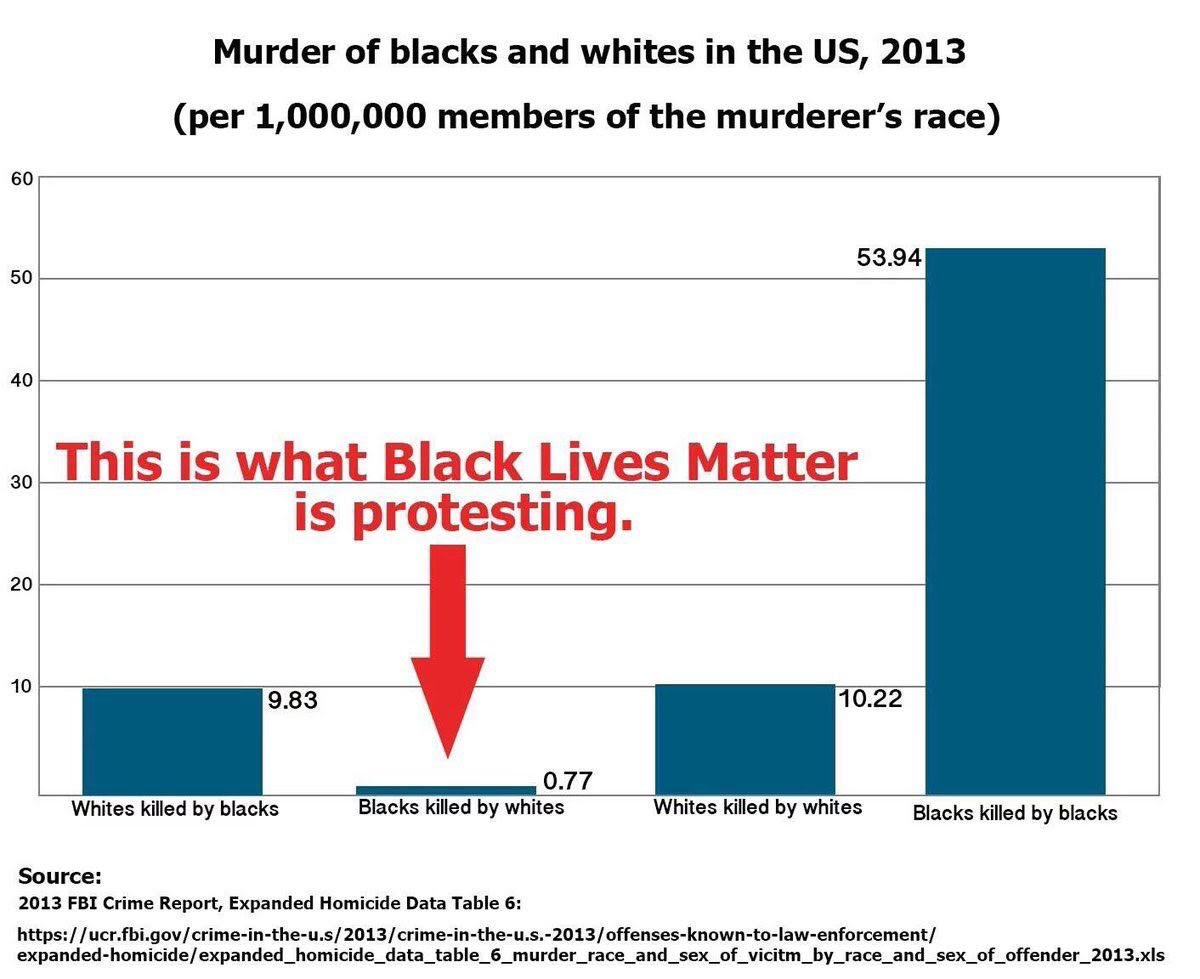 Muhammad Ali Jr says his father would have hated Black Lives Matter and the violent protests which have gripped America in the wake of the killing of George Floyd by a white police officer.

“My father would have said, ‘they ain’t nothing but devils’. My father said ‘all lives matter’. I don’t think he’d agree,” Ali Jr, the boxing legend’s only biological son, told the New York Post.

Because all are Equal but some are more Equal that others, it looks like some news outlets are purging old records to juke the searches and make it so that the long rap sheets of Dindu Nuffin's don't come up.

Otherwise it is very embarrassing for Social justice virtue-signalers when Saint X comes up on violent offender databases that are accessible to the public.

He dindu nuffin' and they keeeled mah baby. He wazz just tryin' to get hizz life together, goin' to skool an' Shit.

The Orwellian dimensions that the corporate mass-media is using to blame White people for shit that Nïggers do is truly astounding.

"So my local news site put out a statement in favor of Black Lives Matter, and it links to one of the ~positive changes~ the publication is doing to help the black community: de-indexing old crime stories. I wish I was making this up. It's beyond parody."


This reordering of facts allows a certain (((tribe))) to resume their traditional gate-keeper role on "sensitive" information─the news that you need to know.

So what you really need to know is that those racist anti-Semites at Ford Motor Company almost debuted the 2020 return of their popular Bronco on July 9th for O.J. Simpson's 73rd birthday. But crisis averted!

‘Everybody's life matters’ ONLY when black lives matter too. Right?
If black lives don't matter, then all lives do NOT matter.
How come this is so hard for some people to understand?

When events repeatedly show that for some people — including many cops — black lives do not matter,
saying 'ALL lives matter' is either:
i.) incredibly stupid,
or
ii.) it is dishonest denial.

And I notice I am the lone voice speaking against racist prejudice towards afro-Americans here at Rodoh.
Anyone else notice that?

So... All those people here claiming to be defending the holocaust narrative because they are against racism?
Where are they?
Why are they silent?
Their anti-racism claim is bogus bullshit. It's a deceitful pose.
"When people who are honestly mistaken learn the truth,
they either cease being mistaken
or they cease being honest"
-- Anonymous
Top
Post Reply
998 posts