Source
Customs Border Guard Generalgouvernement
The Polish campaign began with the attack on Poland on September 1st, 1939 and ended on October 6th, 1939 with the surrender of the last field troops.
The Reich Ministry of Finance seems to have been involved in the war planning at an early stage. The customs border guard followed the fighting troops every few days, and the locations of command posts and subordinate agencies appear to have been determined at the start of the war. The 14th Army in the southern section of the German-Polish border was assigned a liaison officer at the end of August, whose men were to set up offices in Galicia.

The establishment of the customs border guards essentially takes place in two phases:

1939-1941: Liaison officers in Litzmannstadt (Lodsch) and Cracow manage their respective areas independently of one another. They were subordinate to the regional finance praesidia of Lower Silesia and Troppau , as well as the local military commanders.
1941-1944: The entire customs border guard in the Generalgouvernement is subordinate to a command post in Krakow, which in turn is subordinate to the Reich Ministry of Finance, the Reich Minister Fritz Reinhardt.
At the beginning of November 1941, various areas were incorporated into the German Reich, and the Generalgouvernement, consisting essentially of central Poland, was formed.

The borders of the Generalgouvernement (German Reich, Hungary, Slovakia, Soviet Union) were quickly occupied by the customs border guards, although it took some time until the offices were finally determined. The first office in the Generalgouvernement was the command post in Neumarkt (Nowy Targ), established in September 1939. The civil administration was subordinate to the governor general, for whom the ZGS (in addition to its duties for the Reich Ministry of Finance) took over the finance and customs administration on behalf of In the course of November 1941, the customs border guard had reached full operational readiness with around 6,000 men.
At the end of 1941, the customs border guards in Eastern Galicia were established subordinated to the command post in Krakow. From 1943, the customs border guard was increasingly drawn into combat operations with partisans and suffered losses. Smuggling was an important field of activity, with numerous people being shot while trying to escape. The command post issued identification tags for the subordinate agencies from July 1942 .

Head of Customs Border Guard Generalgouvernement
The command posts were initially managed decentrally with a liaison officer in Cracow and two liaison officers in Litzmannstadt (Lodsch) who were assigned to the respective military commanders. With the centralization of the military command structures, the management of the customs border guard was merged and the command post was created in August 1941.

After the occupation of Bialystok, the command posts Ostrow and Sokolow were on an internal border and were converted into main customs offices. The monitoring of this border was carried out from November 1942 by the HZA Siemiatycze in Bialystok . The BZKom were mostly dissolved and relocated to bialystoker area. Malkinia is the end point of transports (not Treblinka) and was identified as having a konzentrationslager by US Intelligence

Treblinka is in the Ostrów Mazowiecka country
Command post Ostrow-Mazowiecki
1939 - November 1942
750 men Sobibor is in the Wlodawa country.
1939-1942 Customs had:
Command Post Wlodawa
600 men It is clear that Zollgrenzschutz had considerable interest in the Sobibor district. It is 10km from Wlodawa town to Sobibor camp.

Bełżec is a village in Tomaszów Lubelski County:
This was part of Command post Tomaszow-Ost
1939-1944
600 men It does not seem a mere coincidence that the camps chosen as ‘extermination’ camps — aka Aktion Reinhardt camps — are also the location of significant customs activity; there is a photo of a Zollgrenzschutz officer at Sobibor which is to be expected especially if this border camp was to do with eviction of people.
Conclusions It is clear from this that Aktion Reinhardt is the physical implementation of the Reinhardt program put in place by the Secretary of Economics Fritz Reinhardt; this has much to do with the sequestering of wealth by departing people as is the roll of all customs worldwide.

There is evidence of people being evicted en masse as from Ciechanow by the District Customs Commissioner Cieszanow, Command post Tomaszow-West.

The Korherr report also coincides with the existence of these command posts. For instance Command post Ostrow-Mazowiecki existed 1939 - November 1942; Korherr being between October 1939 and December 31, 1942. There is a close connection between the liquidation of some Zollgrenzshutz command posts and the Korherr report which is indicative of bureaucratic debriefing of an operation; a job is done lets look at the sums.

I have put the locations of customs border command posts on the map of the General Government prior to Barbarossa.
This is not all of them by any means due to the fact that names have been changed. More will be put on when time permits.
The orange dots are those which are controversial which as in close proximity to the AR camps, allegedly used for extermination.
The others (gold) are just general customs outposts with no atrocities recorded. 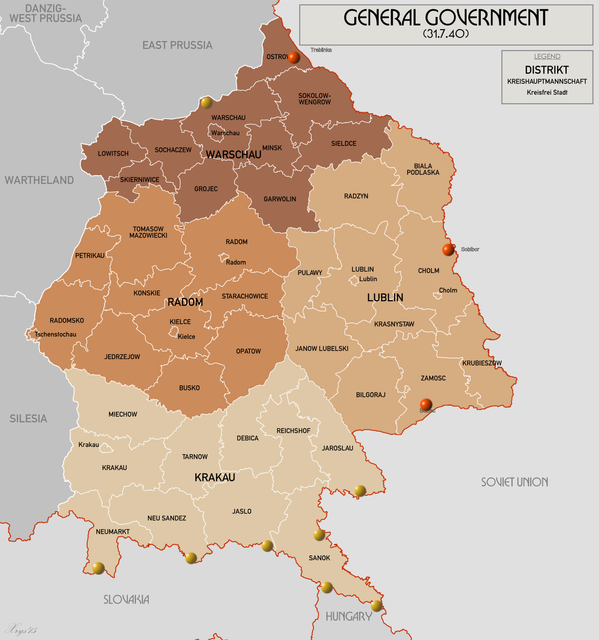