Jews use their power to close down a public meeting to discuss Mossad involvement in the murder of Princess Di. 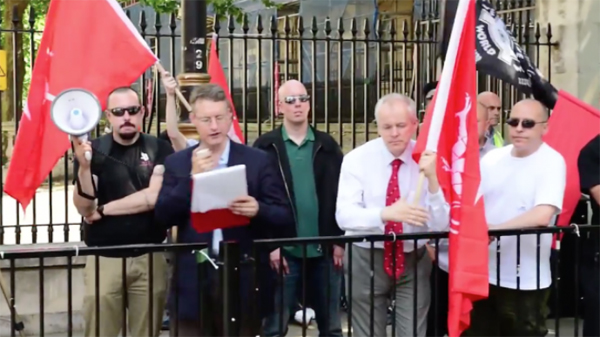 A meeting in Holborn where participants were planning to discuss how Israeli spies murdered Princess Diana was cancelled on police advice this week.

The Keep Talking group, whose participants include neo-Nazis, anti-Semites and Holocaust deniers often dubbed “Nazis in suits” by anti-fascist campaigners, was to discuss conspiracy theories surrounding Diana’s death at the Millman Street Community Centre on Wednesday.

On Tuesday morning, however, organisers were told by the venue that the centre was withdrawing the hire of the room, which cancelled the meeting. Keep Talking’s Ian Fantom said the centre said it was acting “on police advice”.

The event was due to involve several figures known for their extreme far-right views and support of conspiracy theories, including London Forum organiser Jeremy Bedford-Turner, who this week claimed that “Mossad murdered Diana to stop her supporting the Palestinian cause as Dodi [Fayed, Diana’s partner at the time] wanted her to do”.

Gerry Gable, the long-serving editor of anti-fascist magazine Searchlight, said Keep Talking “has its root among American anti-Semites who spread the story that the ‘Jews’ were behind the 9/11 attacks.”

He said: “They put out the line that Jews employed in the Twin Towers were secretly ordered by the people behind the attack that they should not go to work on the day of the attacks… It was obviously easily disproved.”

Fantom said Bedford-Turner’s claims about Mossad murdering Diana were “the first suggestion of such a thing I have heard… that line has absolutely nothing to do with Keep Talking”. He added: “Jeremy Bedford-Turner has been on our mailing list, but I am about to strike him off.”

While welcoming the cancellation, Gable, 80, this week argued that an increasing prevalence of far-right voices in the United States meant that “we are in the worst situation since 1945”.

Gable said: “The combination of [Russian President Vladimir] Putin’s financial and political support, plus a growth of the far-right among those close to [President Donald] Trump, makes for a very dangerous situation. There are a growing number of alt-right people from the US and Canada now operating here.”

The Campaign Against Antisemitism claim the centre sought police advice after CAA alerted the hosts to the true nature of the event.