Russell James on Stormfront posted the following: link
In May, 2015, Ursula Haverbeck (an energetic and well-read 86-year-old woman) made history. In what can only be called a truly defiant video interview (with Robert Bongen for the German magazine, GEO PANORAMA) in which she "threw down the gauntlet" and spoke courageously about the biggest taboo of our times. Namely, the truth about the so-called "Holocaust" -- and she did it on a nation-wide German television station. She covers a vast amount of territory in great detail, and near the end, even dares to speak about a few of the truly disgusting quotes from the Jewish Talmud.

It was a truly seismic event. In the end, when the interviewer says "You know the things you say and believe in . . . that the Holocaust did not happen, could . . . land you in prison". Her response is, "Well then, that's just a risk I have to take, if people want to do that. It's better to stick to your beliefs". She then also adds a few notable quotes, such as: "If you will not stake your life, you'll never win life as your prize", and "If a people is ready to pay the price for freedom, then no one can make them un-free". It just depends on the price, one is ready to pay.
I personally think this woman is correct. What are your thoughts? I see from the letter below that Ursula and Friedrich Berg would like der Juden to pay reparations back to Deutschland. 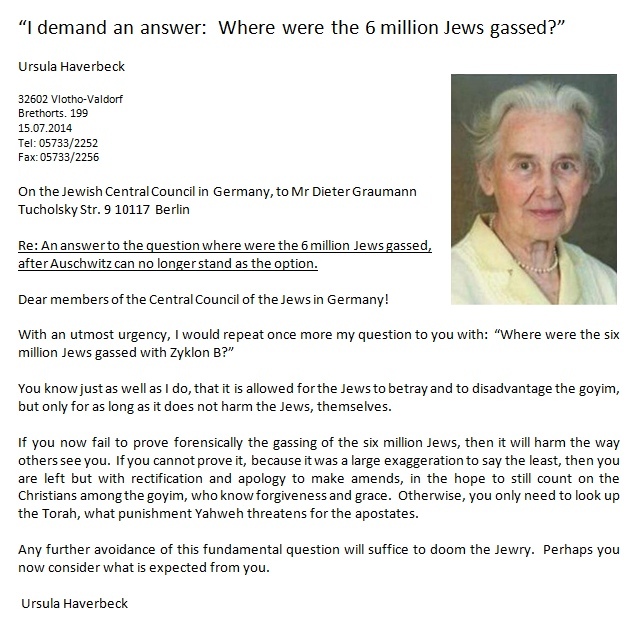