Discuss the alleged Nazi genocide or other wartime atrocities without fear of censorship. No bullying of fellow posters is allowed at RODOH. If you can't be civil, please address the argument and not the participants. Do not use disparaging alterations of the user-names of other RODOH posters or their family members. Failure to heed warnings from Moderators will result in a 24 hour ban (or longer if necessary).
Post Reply
5 posts • Page 1 of 1

It looks like some of the quotes often used by revisionists in this forum might not be authentic. I think that that is a very serious problem for the revisionist cause. My uneducated guess is that these quotes are bait planted by people who want to discredit revisionism. My very ambitious goal with this thread is to clarify and correct this problem.

My very uneducated guess is that there are many fake quotations circulating the internet that are used as bait for revisionists. A very cunning and effective trick to make someone who is telling the truth look like a liar is to bait them with fake evidence. It works like this: I'm a hoaxter, and I want to prove that you, a revisionist, are lying. Unfortunately you're telling the truth, so I cannot provide any evidence that you're lying because there is none. Instead, I pretend to be on your side and say "you're so right, actually, look, I just found another piece of evidence that further proves what you're saying". That sounds great, so you might easily decide that there is no need to be as critical and cautious with that alleged evidence as you would be with other pieces of data. After all, you know it supports the truth. So you just mix it together with all the evidence you have collected so far. However, I have deceived you, the alleged evidence I gave you is fake. Then my friend goes to you and claims that the so called holocaust actually happened. You confidently reply showing him all the evidence you got, including the fake evidence I planted in your collection. At that point my friend says "You're a liar! You're using fake evidence!", and he proves that you're using fake evidence indeed. The fact that you were using fake evidence automatically discredits all the evidence you were using, even if everything else was authentic, and now everybody thinks you're a fraud.

I ask for help from everybody in this forum (both revisionists and non revisionists) to identify these fake quotes. Feel free to post in this thread any quote you find suspicious, even if you haven't actually checked the sources. Ideally we will end up with a list of fake quotes that we can quickly check when we find something suspicious. I start in the next post with a quote that is most certainly fake. Thank you in advance for your help.

Most of the content in these first two posts is taken from this thread.
Last edited by Alonso on Fri Jul 17, 2020 6:51 pm, edited 1 time in total.
Top

This is an example of a quote which is most certainly fake: 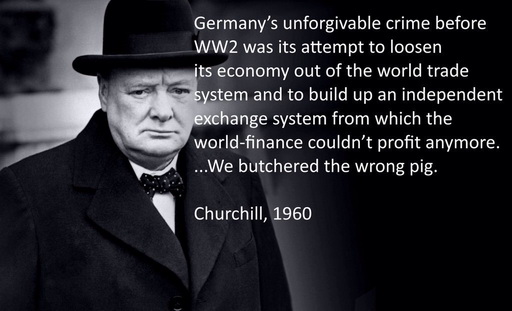 Apparently this is an amalgam of two separate quotes, which are themselves not reliable. The alleged source for "we have butchered the wrong pig" is The New Statesman and Nation, 1948. The rest of the quote was allegedly recorded by Lord Boothby as being said by Churchill when in conversation with himself, and quoted by David M. Pidcock of 'The Institute For Rational Economics' in Sheffield in a 2001 foreword he wrote to the book Propaganda in the Next War. I couldn't find any published information about where Mr. Pidcock took that quote from.

The whole thing seems quite contradictory. The picture says the quote is from 1960, while one of the sources is allegedly from 1948 (and there is no alleged timeframe that I'm aware of for the other one). Presenting a quote from 1948 as being from 1960 doesn't seem right. Also, mixing together in the same picture two quotes from unrelated sources and making them look like they were said in the same speech is misleading to say the least. In order to clarify this I wrote to Mr. Pidcock (the man who wrote the first part of the quote in 2001) asking him for the source of that quote, but he never answered. So this seems to be a very clear case of fake quoting.
Top

Alonso wrote: ↑
Fri Jul 17, 2020 6:47 pm
In order to clarify this I wrote to Mr. Pidcock (the man who wrote the first part of the quote in 2001) asking him for the source of that quote, but he never answered. So this seems to be a very clear case of fake quoting.

Mr. David M. Pidcock happens to be the founder of this website. It says he has become crazy since 1975. https://www.islamicparty.com/people/david.htm

Alonso, it's pretty simple: just don't trust been-there or anyone who posts meme pics to argue history when it comes to precision.

Regarding any Churchill quotes, you can email an authoritative source like the Churchill Centre - and it seems someone already has with this one and got a negative response - but it otherwise stands to reason that the quote is fake and should not be investigated further.
Top

It's not the lack of answer what makes the case clear to me. It's all the other things explained in my post, plus the info in the link provided by Rastus (which I had already seen, but forgot to include in my post). I wrote the email following been-there's suggestion, for the sake of being as thorough as possible and giving Mr. Pidcock a chance to explain what he wrote, but for me the case was clear before that.

been-there writes a lot, and being a human he makes mistakes, of course. However, I've read a lot of what he's written and I think that most of it is of high quality and based on reliable sources. Actually, part of the purpose of this thread is to help him and other honest revisionist fix the few mistakes they make on rare occasions.
Top
Post Reply
5 posts • Page 1 of 1