Discuss the alleged Nazi genocide or other wartime atrocities without fear of censorship. No bullying of fellow posters is allowed at RODOH. If you can't be civil, please address the argument and not the participants. Do not use disparaging alterations of the user-names of other RODOH posters or their family members. Failure to heed warnings from Moderators will result in a 24 hour ban (or longer if necessary).
Post Reply
43 posts

You haven’t proven anything to be physically impossible .

Really? If that's the case why don't you tell us how to pump the air out of hermetically sealed brick building since that's what the hoaxers claim happened?

How many times do you have to be shown and reminded that it is HEARSAY that a vacuum was used, it did not work and that the witnesses then agree, exhaust from an engine was used?

There is no witness who states he worked at the chambers, saw exactly how they worked and cleared them of bodies after the people inside had been subjected to death by vacuum.

Witnesses who actually worked the chambers, such as Erich Fuchs, never even mentioned the use of a vacuum. He only ever referred to the use of exhaust from an engine.

Lots of foot stamping and shrieking of, "Did not, did not" by the hoaxers in this thread.
Top

YOU HAVE BEEN TOLD SOOOOOOO MANY TIMES, but you do not listen because anything that refutes your claims you just ignore because you’re an antisemite and a crank.

This thread is on the Intelligence Reports of an alleged third camp, a Treblinka III which existed on Sept 1, 1941. This is 10 months (305 days) before the current TII extermination camp was accepting people for their ersatz juden morning roast. (as alleged).This thread is not to discuss the alleged methods of execution or body disposal; the report does not mention gassing but merely extermination; they could have been drowned in the Bug river for all I care.

Either way the abuse from Wolf123 is not acceptable and will be brought to the attention of the moderator.

It was rightfully suggested that this was a typo or an issue with the photocopying at the time or compiling. A single error of Sept 1941 perhaps, but the article on Malkinia quite a few pages previously puts Malkinia in existence at the same date of reporting; this is no error.

While current historiography has Treblinka 1 arbeitslager as a quarry this is no issue as so does the Intelligence report. Opened on 1 September 1941 as a forced-labour camp (Arbeitslager) which in reality was a prison.
Current historiography from July 1942,has the Vernichtungslager TII with three sections also called camps; they are in reality subcamps. The Intelligence report states 3 camps in 1941 that do not correspond with the modern historiography. The only thing that potential corresponds is camp three being a death camp or death sub camp. The dates do not correspond nor do the functions of the other camps or sections. As the Intelligence report precedes the modern historiography by a year it stands to reason that this is the first report on the Treblinka complex. Everything else is a morphing of what was already in existence with another function.
VHO says:
Aside from the verification of the intelligence received regarding these camps, a feasibility study of an attack on Treblinka and Majdanek was ordered by the Commander-in-Chief of the Home Army, General "Grot" Rowecki on January 27, 1943, who demanded that the report be returned by February 17, 1943. Exhibit 65. Based on this in-depth investigation, the Polish Ministry of the Interior in London issued its official comprehensive report about the Nazi concentration camps on March 1, 1943. Exhibit 66. Written in halting English, this report was cumbersomely entitled "List of Different Types of Concentration Camps for Poles" ("Poles" means all citizens of Poland, minorities included). However, this "List" clearly stated that the Treblinka II Camp where John Demjanjuk was alleged to have been was not an annihilation camp.

The annihilation camp "Treblinka III", according to this official governmental document, was located in an area of the large Czerwony Bor Forest, within a remote and secret old military base also named Czerwony Bor. The Treblinka III death camp for the Jews was therefore located about 40 kilometers north of the Treblinka II camp.

The Treblinka II Camp, considered during the Jerusalem trial as the annihilation camp, was described in this official, multi-paged governmental document as just an ordinary concentration camp.

While the location of the Treblinka III camp was remote and secretive, the Treblinka II was located 240 meters from an important railway and 270 meters from a concrete-paved roadway, then considered in rural Poland to be the equivalent of a busy superhighway. The nearby Wolka Okraglik village dwellings were located 800 (eight hundred) meters away from the Treblinka II Camp, and during this camp's existence, local peasants cultivated their fields up to the camp's barbed wire fences. Exhibit 67. If there were an annihilation program going on at Treblinka II it would have been visible to everyone in the surrounding area.

The Polish report mentioned above is available from the Hoover Archive at Stanford University. Note that this information corresponds with what I have said for over two years now and correlates with the Intelligence report mentioned.

The military barracks at Czerwony bor prior to the invasion of Poland by the Reich was the 33 infantry division.

The 33rd Infantry Division was a reserve infantry division of the Polish Army in the final days of the Second Polish Republic.
It was not part of peacetime structure of the army, and was formed on August 24–27, 1939, out of units stationed at military districts I (Warsaw) and III (Grodno). It consisted mainly of Border Protection Corps battalions, together with students of Central Border Protection Corps Officer School (Osowiec) and 32nd Light Artillery from Rembertów.

According to the operational plan of the Polish Army, the Division, commanded by Colonel Tadeusz Zieleniewski became part of Independent Operational Group Narew, as a reserve unit. In late August 1939, it concentrated in Czerwony Bor, and was tasked with defending the area of Ostrołęka, Łomża and Nowogród. One of divisional units was sent to Osowiec Fortress. more

It is probable that the barracks of the 33 Infantry were also used by Einsatz 1V in the area a few years later.
There were other old forts etc in the region but not in the Red Wood Forest. 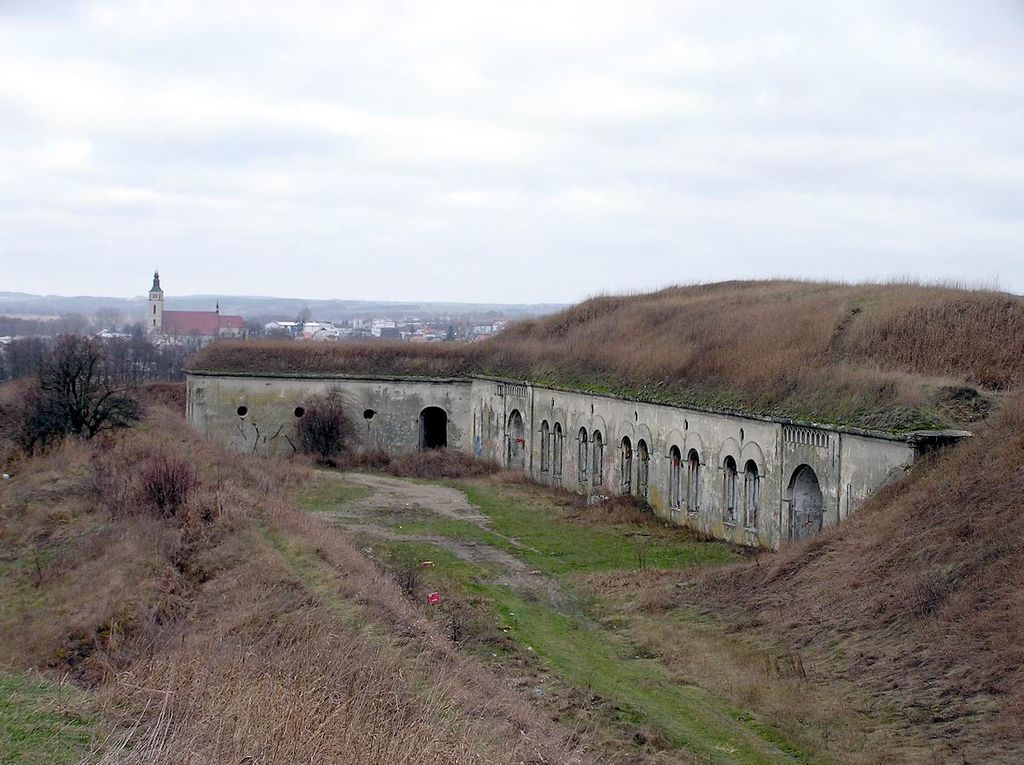 Huntinger, are you admitting that there was an extermination camp?

That’s what your source claims.
“I am an expert witness in such matters, Nessie. I am NOT arguing from ignorance. I have both a college degree and over 40 years of experience as a contractor and sub-contractor in that type of work. I AM an authority on such matters. Do you understand that? I am appealing to a rational examination of a claim, NOT an appeal to ridicule. My analogy of the Prius race car is precisely that; an analogy and has nothing to do with ridicule. Do you understand that, Nessie?” - Turnipbrain’s defense about his erroneous claims and weird obsession about Treblinka

That’s what your source claims.

I am quoting two sources, one directly that says there was an extermination camp in Sept 1941, the third camp I refer to as Treblinka III; the same report from US intelligence declares Terezin the same. The other one speaks of an extermination camp in the region 50km from Treblinka township which they had made plans to attack. Investigation shows that there were numerous executions of partizani in that area as well as communists; they were Juden who committed crimes of the times.

I freely admit there is a huge likely hood of mass executions of civilian fighters we call terrorists today. By law they are terrorists and liable to summary execution as were any civilian freedom fighters.
It is thought that TIII is closely related to the actions of Einsatzgruppen IV. Einsatzgruppe IV, based in Dramburg (today’s Drawsko Pomorskie), commanded by SS Brigadeführer Lothar Beutel, with 200-250 men. Drawsko Pomorskie is about 420km from Czerwony bor.
No German document attributes executions of Juden to the Einsatzgruppen in Poland.

Please find enclosed a copy of the comprehensive official report of the Polish Government-in-Exile in London on German concentration camps prepared for the April 1943, Bermuda Conference of the Allies (Encl. 5). This report is based upon the investigation of the Treblinka camps requested by the Western Allied governments and ordered by "Grot"-Rowecki, the Commander-in-Chief of the Polish Home Army. It specified that Treblinka-I was a "forced labor camp". The Treblinka-II camp, the alleged site of Demjanjuk’s crimes, was denoted as a "concentration camp proper", without the designation of "death camp". The Treblinka-III camp was listed as "the death camp" for the Jews and was reported to be located at Czerwony Bor. As late as in 1944, its existance was also mentioned in the renowned wartime publication Ghetto Speaks published in New York (Encl. 6). The remote Czerwony Bor (Red Forest) was (and is) located 40 kilometers north of the Treblinka-I and Treblinka-II camps. Additional documents regarding Treblinka-III are available from the Polish Historical Society in the USA (tel. 203-325-1079) and archives of the Polish Underground Study Trust in London (tel. 011-4481-992-6057).

The Jews haven't been able to install investigatory barriers at T-III so the results of LIDAR/GPR research could be informative. That would be an expensive undertaking though and the chances of an honest investigation by gov't/university is just about nil.
Top

No German documents about a TIII at Czerwony Bor, nor any witnesses who say they worked at that place. No explanation as to why a camp so far from Treblinka would be called after Treblinka. Just an early intelligence report from 1943, long before there had been any full investigation.

Scott - On a side note, this forum is turning into a joke with the vicious attacks--and completely unnecessary vitriol--that everybody is making upon each other.
Top
Post Reply
43 posts