Discuss the alleged Nazi genocide or other wartime atrocities without fear of censorship. No bullying of fellow posters is allowed at RODOH. If you can't be civil, please address the argument and not the participants. Do not use disparaging alterations of the user-names of other RODOH posters or their family members. Failure to heed warnings from Moderators will result in a 24 hour ban (or longer if necessary).
Post Reply
1189 posts

Turnagain wrote: ↑12 Jul 2020, 15:52 So, just the witnesses I have read made mistakes. All the rest of them told the absolute gospel truth. If that's the case, name and quote those witnesses who told the truth about the gas chambers, the mass graves, the exhumations and the magic Jew barbeque.

You can make a mistake and tell the truth. They all told the truth about mass killings in chambers, graves and cremations.


The Germans could and did build workable gas chambers. Just not homicidal gas chambers. If the Germans dug 10X25X50 meter (or larger) graves then show them to me and describe the equipment used to dig those graves and how it was transported. Then tell me how the magic Jew barbeque as described by the eyewitnesses functioned. If those witnesses "made a mistake" then name and quote the witnesses who told the truth.

I dispute that those entire train loads went through TII, due to the lack of any evidence to corroborate that. I say it was more likely Malkinia.

Nessie wrote: ↑12 Jul 2020, 16:13 I dispute that those entire train loads went through TII, due to the lack of any evidence to corroborate that. I say it was more likely Malkinia.

It seems very few can define what the Treblinka facilities were; somehow Malkinia seems to be close but outside of the system. Malkinia has been defined as a correctional facility though with some reservation. The maps produced by some witnesses more closely align with Malkinia than other facilities however. TII was a konzentrationslager, a stop off for a spur going to the and from the quarry. Most likely any movement of haftling from their would be by truck, cart or walking.

Many people were released from the arbeitslager, hundreds per day, while hundreds arrived and yet there is also no record of the movement of these people. It is unlikely anyone returned from the Czerwony Bór forest which was a final destination to the clouds.

You can make a mistake and tell the truth.

I dispute that those entire train loads went through TII...

Two witnesses claimed that trainloads of people left Treblinka. "WHAT IF" they were mistaken? They "COULDA" left from Malkinia. Thus we have more tales from holyhoax la-la land.
Top

Woulda, coulda, didn't. Malkinia is worthy of a thread of its own.

IIRC, when Franz was ordered to draw a map of T-II, the map he drew was actually a map of Malkinia. Can't recall all of the details.
Top

Thanks, the information I think you are referring to is found below. Arnulf Neumaier
In prison, more than 15 years after the fact, Kurt Franz - the main defendant in the Treblinka Trial of 1965 - drew a sketch, from memory, of the camp where he had been employed as of November 1942. This sketch could perforce not be correct in every detail, considering the many years of constant influencing that had gone by, but it differed entirely and not only in its external form from Treblinka II (B) as it is shown on an official Polish layout. As we know today, the camp as described by the witnesses is a mixture of conditions and elements from the camps Treblinka II and Malkinia. A stunning confirmation of Franz's camp sketch was found on an aerial photograph of May 13, 1944, which is held in the National Archives. This camp is also the source of the terms 'lower' and 'upper' camp, as Franz had already marked on his sketch. The smaller 'upper camp' was separated from the 'lower camp' by a road. Franz was able to label the buildings in the camp and to mark his sketch with a large number of the surnames of the personnel in Malkinia, including his own surname, Franz, in relation to certain areas of the camp. The fact that many eyewitnesses describe this camp casts a rather dubious light on these witness statements, as the transit camp Malkinia has never been suspected of harboring an extermination center.
SS-UnterscharführerJosef HIRTREITER is said to confess to working with an SS Sonderkommando at Balkinia, Poland. In his confession he said he worked at Balkinia which may be a different place to Malkinia. In his trial this was discounted and he was held accountable for atrocities at Treblinka II.

Some might say Josef was confused; note he says he later found out people were gassed. As this was a transit camp no doubt he was witnessing a shower or delousing process. He was sentenced to life imprisonment on 3 March 1951 on juüdisch inspired trumped up charges.

There were no mass murders at Konzentrationslager TII or B; this is apparent due to the convoluted claims and almost total lack of confirming evidence. Finding a few KFC drumsticks at the site or grannies ashes means little, nor does asking where they went makes any sense.

It is clear that records were destroyed, train records, most likely by the Soviets and Polish Commission. It is also clear that thousands were executed in the Czerwony Bór forest (red forest) 50km north of the Treblinka Town by Einsatzgruppen. These executions of Juden were not only from local ghettos but from one 50km away. The reasons for these executions is unknown but most likely due to Partizan activity.

The US Intelligence was aware of the red forest executions and related this to Treblinka being in the same region as the camps. The Polish underground also equated these executions with the Treblinka complexes.

All you needed to do was search Kurt Franz Treblinka camp plan; 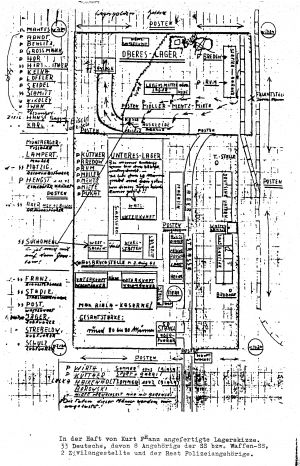 Not that interested in it. It for damn sure isn't a map of T-II.
Top
Post Reply
1189 posts