Lina and Reinhard
Lina Mathilde Heydrich (14 June 1911 – 14 August 1985) was the wife of SS-Obergruppenführer Reinhard Heydrich. Reinhard Heydrich, is said to have been the architect of the Nazi extermination of six million and portrayed as such in many movies and documentaries, including the TV serial "Holocaust", where he was played by actor David Warner. 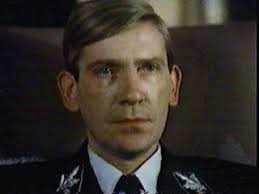 David Warner as Heydrich
Lina says that her husband was the opposite to that portrayed. He was a was a “scapegoat,” not the anti‐Semite or “monster” portrayed in the film. “He was a person like you or I, a normal person with flaws and advantages,”
The widow Lina was interviewed by the NY Times. 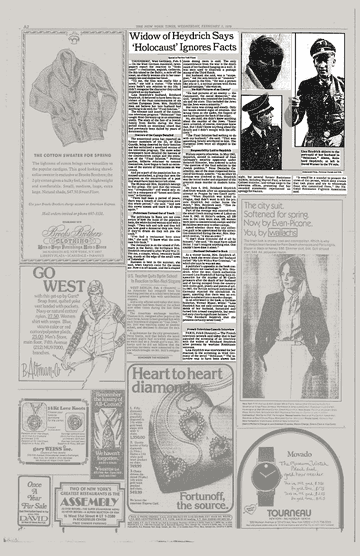 Lina makes it quite clear that Germans are just playing lip service to modern politics. She said: “They talk and talk and they tell you how good a democrat they are. Only if they're drunk do they tell you the truth; The politicians in Bonn are not even aware of how the mass of the populace feels”.

Reinhard she says “had pictures of an enemy — the Communist, the social democrat,” she said, “people who resented the intellectuals and the state. This included the Jews but the Jews were a minority. I don't know anything about the murder of the Jews. Some were arrested, of course, everyone knew that. But I didn't know anything about the details and I didn't mingle with the officials.”

“The Final Solution had nothing to do with my husband,” she said. “That was something falsely attributed to him. The European Jews were all shipped to the Urals.”

After the war, Czech authorities accused Lina Heydrich of having been responsible for the murder of 90 Czech prisoners after the death of her husband and of having escaped from the country with stolen gold, jewels and pieces of art. In 1947, the British military command in Germany rejected the extradition request, asserting that there was no evidence to substantiate a murder charge.

We know who the real criminals are and it was not Lina or her husband Reinhard.
Leben mit einem Kriegsverbrecher