Discuss the alleged Nazi genocide or other wartime atrocities without fear of censorship. No bullying of fellow posters is allowed at RODOH. If you can't be civil, please address the argument and not the participants. Do not use disparaging alterations of the user-names of other RODOH posters or their family members. Failure to heed warnings from Moderators will result in a 24 hour ban (or longer if necessary).
Post Reply
3 posts • Page 1 of 1

Over the years I have watched many holocaust documentaries featuring Rebecca Erbelding of the USHMM and never once did it cross my mind she was not Jewish. She herself said recently: “At a talk today, asked about my personal background. I confessed that I’m not Jewish, but with a Hebrew first name, German last name, and my nose and hair, I ‘pass’.”

As it turns out Becky Erbelding is actually a badass anti-semitic goy bitch who pisses everybody off especially the Jews. I wonder how much longer she will remain employed by the museum. 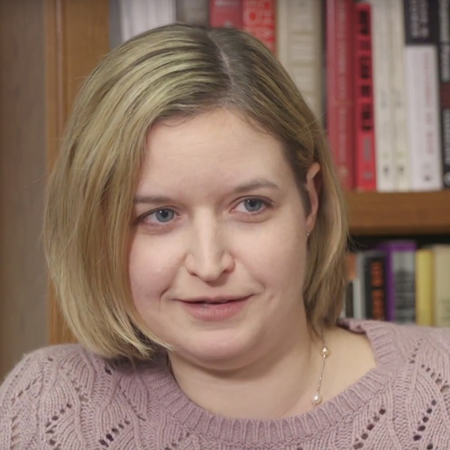 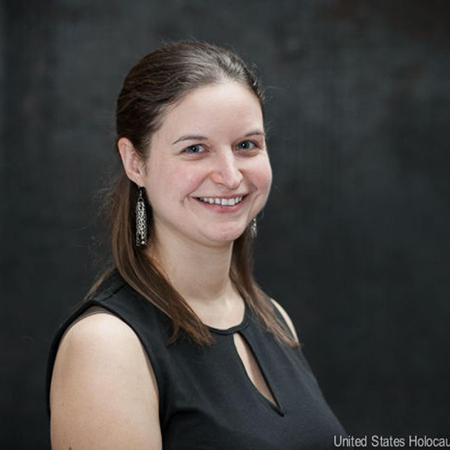 Becky understands she could pass for a Jew but only because she is a racist.


It began in the 12th century and was a favorite of the Nazis, but a Holocaust Museum historian ascribing a hooked nose to Jews?

Moshe Phillips is the national director of Herut North America's U.S. section. Herut is an international movement for Zionist pride and education.
More from the author ►

It’s bad enough that an annual Belgian carnival float mocks Jews by depicting them with huge “Jewish noses.” But now a prominent historian at the United States Holocaust Memorial Museum is also perpetuating the myth that there is such a thing as a “Jewish nose.”

In a tweet on December 17, 2019, Dr. Rebecca Erbelding, a staff historian at the museum who frequently represents it at events around the country, wrote: “At a talk today, asked about my personal background. I confessed that I’m not Jewish, but with a Hebrew first name, German last name, and my nose and hair, I ‘pass’.”

Historian Sharonna Pearl wrote an essay in Tablet last year titled “The Myth of the Jewish Nose: It’s Not Really a Thing.” Pearl was just stating the obvious. Yet here we have a staff historian at the Holocaust Museum—of all places—who thinks that it IS a thing.

The idea that there is a distinctive “Jewish nose” dates back to the 12th century CE, when medieval anti-Semites introduced it as a way of singling out Jews for contempt.

"The nose became “a physical symbol of otherness for Jews,” as Prof. Roy Goldblatt has put it.

Nazi Germany’s propaganda machine made ample use of the “Jewish nose” stereotype. A notorious Nazi film produced in 1940, called “The Eternal Jew,” purporting to expose the “real” Jew, focused on “Jewish faces,” zooming in on Jews’ noses to make them seem repulsive.

Similar images appeared throughout the Nazis’ news media, cultural publications, and children’s books. You would think that a historian at the Holocaust Museum would be informed and sensitive about the danger of echoing such stereotypes.

In recent years, the “Jewish nose” lie has been heard from various other quarters. In 1999, for example, Arizona state legislator Barbara Blewster told a colleague, “You can’t be Jewish. You don’t have a big hooked nose.” Blewster was compelled to publicly apologize, but she continued to insist, “I have no prejudice at all. I admire the Jews.” Sure she does.

• The recently resigned prime minister of Malaysia, Mahathir Mohamed, has repeatedly referred to “hook-nosed Jews.”
• The website of Belgium’s Ghent University until recently included a sign-language video showing a hooked nose as the translation for the word “Jewish.”
• And a Jewish woman in Sweden recently reported that when she went to a Stockholm police station to have her photo taken for an ID card, an antisemitic officer digitally altered her image to drastically enlarge her nose.

Women in particular have suffered from the “Jewish nose” stereotype that Erbelding is perpetuating. Rachel Jacoby Rosenfield and Maital Friedman of the Shalom Hartman Institute have written about how the “Jewish nose” and related stereotypes have been used to intimidate Jewish women into altering their appearances. “These negative stereotypes have impacted our Jewish psyche and spawned a self-consciousness and communal shame about ‘Jewish looks’,” they point out.

Some see a direction connection between the Jewish nose stereotype and violence against Jews. In a recent essay, Jonathan Kaplan, of the University of Technology-Sydney, noted that Pittsburgh synagogue gunman Robert Bowers invoked classic anti-Jewish stereotypes in his online ravings. “How we speak about and depict others in the media and social discourse perpetuates long-held stereotypes and ultimately emboldens hate-filled individuals,” Kaplan warned.

Sadly, Rebecca Erbelding’s remark about “Jewish noses” is just the latest in a series of extremist statements that she has made in recent years, forcing the U.S. Holocaust Museum to publicly apologize or distance itself from her words.

One such episode occurred when Congresswoman Alexandria Ocasio-Cortez compared U.S. border detention facilities to Nazi-era “concentration camps.” Erbelding sent out tweets and re-tweets sympathizing with Cortez’s position. She even gave “a Geppetto checkmark” to Cortez’s defense of her declaration. (That’s shorthand for saying that a statement is “the truth, the whole truth, and nothing but the truth.”) The Holocaust Museum then issued a statement saying that Erbelding’s position “does not reflect the position of the Museum.”

Erbelding has publicly condemned the United States for destroying Syria’s chemical weapons factories. She has promoted donations to the American Friends Service Committee despite that group’s comparisons of Israel to Nazi Germany.

She has even claimed it would have been wrong for the U.S. to bomb Auschwitz, because it “would have killed a lot of people.” That last one is so bizarre, it might sound as if she couldn’t have been serious—but she was.

Rebecca Erbelding needs to apologize for perpetuating the deeply offensive stereotype about “Jewish noses.” But beyond that, one might ask: how many more times will the U.S. Holocaust Museum find itself embarrassed by Erbelding’s extremism?

America’s taxpayers pay Erbelding’s salary and finance the Holocaust Museum. They have a right to expect that federal government institutions will not have a hand in the irresponsible parroting of anti-Jewish stereotypes.

Moshe Phillips is national director of Herut North America’s U.S. division; Herut is an international movement for Zionist pride and education and is dedicated to the ideals of pre-World War Two Zionist leader Ze'ev Jabotinsky. Herut's website is www.herutna.org

Re: The 'Jewish nose' myth is alive and well - in the US Holocaust Museum

In 1850, Scottish zoologist Robert Knox described the jüdisch nose as “a large, massive, club-shaped, hooked nose, three or four times larger than suits the face… "thus it is that the Jewish face never can [be], and never is, perfectly beautiful.”
Possibly they have those noses to breathe in as much free air as they can. One cannot get more jüdisch than their noses which are based on hundreds of years of Goyim observations. 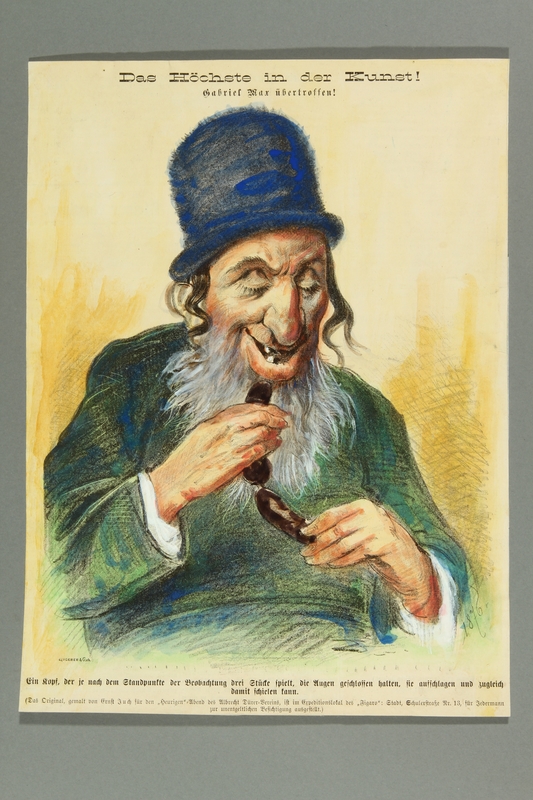 Sharrona Pearl disagrees with this Goyim observation and says the following:
There is no such thing as a Jewish nose. There are Jews, and they have noses, just like almost everyone else. Those noses are in no way remarkable or significantly different from the noses of the general population. The big (often hooked, frequently grotesque, generally repulsive, and highly caricatured) Jewish nose is a myth.
Many Jews have embraced the myth of the Jewish nose with pride as a way to claim a particular identity and make their minority status public and visible. There’s something deeply comforting about being able to identify someone as Jewish through this quick and highly visible shorthand.
It would appear that Juden at the museum and elsewhere like their nozzles as a facial badge of recognition; an alternative perhaps to wearing their deserved yellow stars (which they wanted to wear in the 30s). The nose is a facial flag that screams to everyone "look at me I am Jude". Yet for some reason they do not like the cartoon of the "Happy merchant". 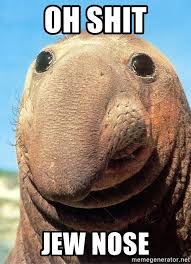 Re: The 'Jewish nose' myth is alive and well - in the US Holocaust Museum

If the Jews say so, then obviously the Jewish nose does not exist. 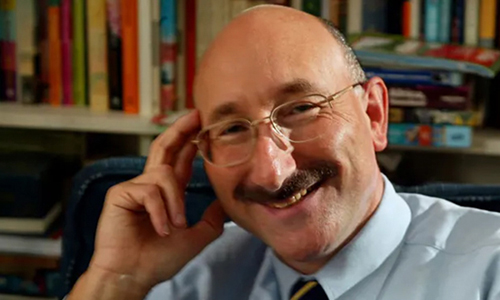