I wrote this when our valued forum was down.
The graph is from jüdisch population data and reproduced here before. The data is over a 130 year period from various sources publicly available, the main one linked below.
It is clear that the data of jüdisch population between 1880 to 1940 had been fudged by the AJC; this was either an on going process for the various historical claims der Juden had made prior to WWII. All of this was an attempt to get shekels and also the probable origin of the 6 million figure.
The statistical jüdisch world population data gathering began in earnest in 1880 with a population of 7.8 million.
It is highly likely the statistics up to 1939 were bogus due to Untermyers involvement since the Nationalsozialists came to power. All population data had to go through his office before publication. On analysis of the graph below using modern data the line of best fit lines up with the modern data showing a linear trend of growth and also with the 1950 post war figure and the point of origin the 1880 7.8 million figure. From this there is a high degree of confidence that the jüdisch
world population figure in 1940 was about 10.3 million and not the 16.7 million as claimed by the AJC and published. 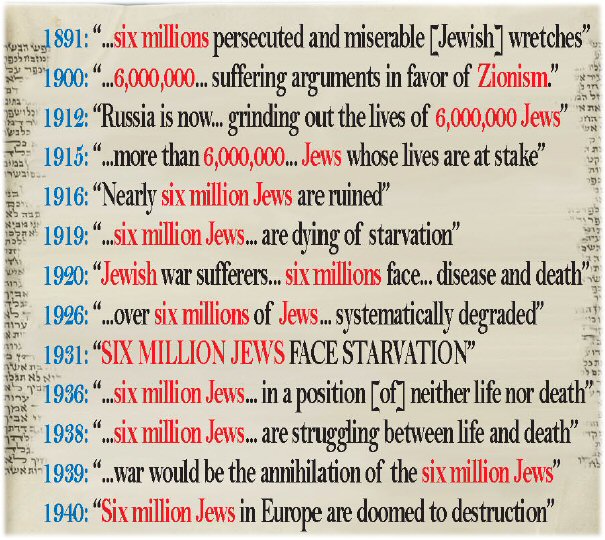 Jüdisch World Population: Statistics
The 6 million jüdisch deaths is central to ths alleged Shoah. The six-million figure was declared to be the indubitable truth am Nürnberger Militärgericht.
Don Heddesheimer shows that the six-million figure dates back to a Jewish fundraising campaign that started during the FIRST World War and reached its peak in the mid-1920s. During those years, jüdisch groups in the United States spread the rumor that millions of Juden in Europe were suffering to the degree that millions had died already, while many more millions would face a lingering death. The New York Times was the main vehicle for such propaganda, which even included well-known buzzwords like “extermination,” “holocaust,” and the now famous “six million” figure.

What is not so well known is that Samuel Untermyer jüdisch American lawyer and civic leader probably had a huge role to play in fudging data to suit die zionistische und internationale jüdische cause. Untermyer advocated the Zionist movement and was President of the Keren Hayesod, the agency through which the movement was then and still is conducted in the United States.

In 1933, Untermyer helped found the Non-Sectarian Anti-Nazi League to promote an economic boycott of Nationalsozialist Deutschland. This in effect was a delaration of war on the Reich. 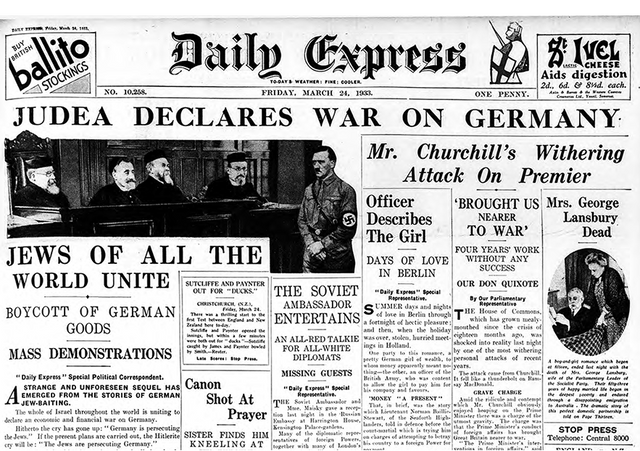 jüdisch boycott of der Reich
In May 1933, the American League for the Defense of jüdisch Rights was founded in New York City to organize a boycott of Nazi Germany.The League was inspired by a speech by the controversial Wall Street attorney, Samuel Untermyer. Untermyer was a guest speaker at the AJC meeting. The league invited Jude Untermyer to become their President. In virtually all aspects the the AJC and the League are one and the same.

Since inception, the American Jewish Year Book has documented the Jewish world and has given significant attention to Jewish population issues. This data was collected and collated by the AJC (American jüdisch Council) for which the Zionist Untermyer was leader.

On this basis the world jüdisch population could be changed at a whim to suit political purposes.

Modern data of jüdisch world population will be gathered and graphed, then extrapolated back; people can make up their own minds.
The data is taken from JVL
The data is from 1880 to 2020 which is simply graphed onto excel and reproduced here. 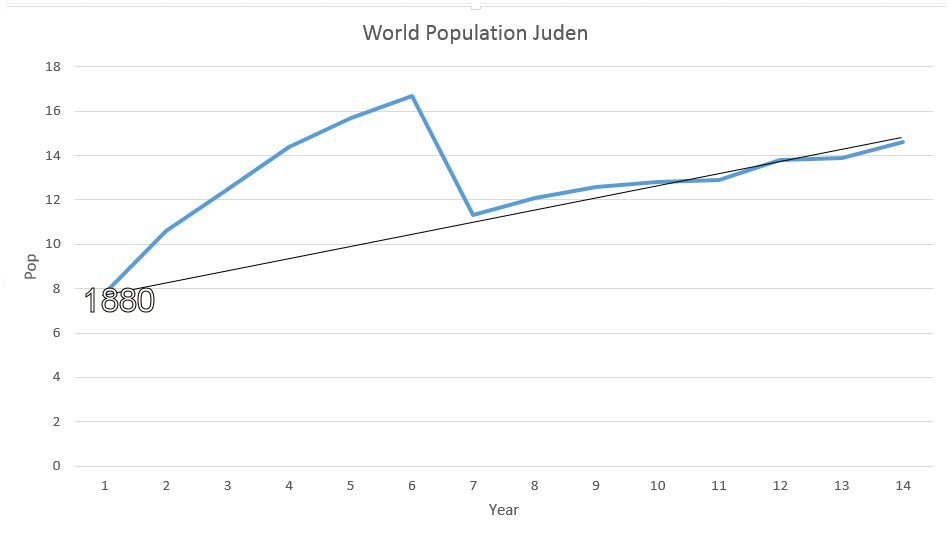 The line in red extrapolated back from modern data, completely invalidates the erroneous data compiled and fudged by Untermyer and his AJC cronies.
Using this data the world population of Juden in 1940 is not 16.7 million but about 10.3 million.