Discuss the alleged Nazi genocide or other wartime atrocities without fear of censorship. No bullying of fellow posters is allowed at RODOH. If you can't be civil, please address the argument and not the participants. Do not use disparaging alterations of the user-names of other RODOH posters or their family members. Failure to heed warnings from Moderators will result in a 24 hour ban (or longer if necessary).
Post Reply
258 posts

It’s actually very simple. If you want to deny that the Nazis murdered millions of Jews using various methods (such as gassing and shooting) then you need to show with evidence which can be verified where they went. The very fact that this question has been asked time and time again and not a single Holocaust denier has been able to answer the question satisfactorily speaks volumes about the credibility of the claims made by Holocaust deniers.

Why don't you produce some records for the Jews who were known to have been sent to the Lublin district, mainly Majdanek? When you find those records you will probably find the answer to your "Where did they goooooo?" question.

After that, maybe we can get back to Baddiel and his little hit piece on revisionism. Think that you can do that, Israel?
Top

Lupus Israel wrote: ↑
Mon Mar 30, 2020 4:34 pm
I’m not interested in reading anymore antisemitism and racism so before I waste anymore of my time on Holocaust deniers, goodbye.

Has it never occurred to you that people enjoy different things?

Yep, but it apparently hadn't occurred to the New Yawk Jew.

You have given no plausible reasons to dislike Jews. You use Jews as a scapegoat to cover up for your own insecurities and problems.

Celler worked for forty years to repeal the Reed/Johnson Immigration Act of 1924. With a compliant congress and ever so many assurances that the Immigration Reform Act would never change the demographics of the US along with the great traitor, LBJ, in the White House he finally got his heart's desire. When did the assurances that there would be no changes to the US demographics morph into, "Diversity is our strength"?

So, would the US be better off with the absence of Jews such as Emanuel Celler or not? Or, is it better off as a minority White country overrun with shitskins from every corner of the globe?

Then we have the Jew's endless attacks on the 2nd amendment rights of the people. Disarming the people is a priority for Jews. Name one major "gun control" act of the last half century that doesn't have a laundry list of Jews tacking their names to the bill. Yeah, right. Just what the hell do you Jews WANT to do that you can't do as long as I own a gun? Uh-huh, a nice White minority country of compliant shitskins.

The truth is starting to become more and more apparent, so for I have concluded that you are an antisemite, a white suprematist, a Nazi sympathiser, a conspiracy theorist (especially a Holocaust denier), have I missed anything out?

You damn straight I don't like Jews and their efforts to realign the country with their goals. I prefer the company of White people to that of a massive influx of off-brand non-whites. No, I'm not a socialist of any stripe but if the Germans or any other wants to give a go then more power to them. "Conspiracy theorist" my fat arse. Since when does not believing in some Jew's tale of the "poor, sufferink Jews" and their mythical six gorillion (or whatever) because that's "anti-semitic"? Get hosed, Jew.
Top

Quite frankly, after my time reading the posts by Werd and Turnagain, I have realised that it’s just going to be a waste of my time even responding to any Holocaust denier because his mind is full of racism, antisemitism, and of a conspiracy theories mindset.

Holocaust deniers want to have their cake and eat it. They demand for people who accept the Holocaust happened to prove certain things, but they quite happily accept certain things which have no evidence to prove them.

I’m not interested in reading anymore antisemitism and racism so before I waste anymore of my time on Holocaust deniers, goodbye.

No doubt Werd and Turnagain will think of themselves as victorious or something along those lines because they can’t comprehend that sane people have better things to do with their time than waste their time reading posts by lunatics.


Hello, Friend. Welcome to the forum.

I'm one of the least likely to subscribe to conspiracy-theories. Some paradigms are admittedly more useful than others. However, hopefully, we can still arrive at some thumbnail sketches about History, "the way it really was."

Let's get some of the big bugaboos out of the way first?

I don't "own" History and I really don't think Jews do either. Owning the media and running academia is not quite the same thing as having an unknowable, almighty God at your beck and call. But I could be wrong.

1) Racism is when White people advocate for and vigorously assert their interests, and 2) anti-Semitism is when someone says something that Jews (or at least the Anti-Defamation League) don't like.

I agree with the catchy cliche of the late Holocaust Revisionist, Mr. Friedrich Paul Berg, the Columbia-educated engineer who said that "Nazi Gassings Never Happened." And to that extent the Allied, Soviet, and Jewish narratives about what DID happen during the war were very often blatantly "Hoaxed."

Lots of very, very bad things happen during wars. It is not the Revisionists who have made a religion out of it.

Is this a conspiracy-theory? Well, not exactly.

We can dive into the weeds on details─that is where the Devil is really to be found─but my view is that the Big-H is not a Monolith. The Holocaust is no more a Monolith than any other phenomena with human aspects and real-world dimensions.

Since I do not regard the Big-H as a "Monolith," it is not possible to "Deny" it. That would be too reductionist to make any sense.

Like anything else, some things are true and others are most clearly NOT true. The Scientific Method makes a good lodestar.

But to try to question the Holocaust is the biggest sacrilege of our times.

We can't even get the Believers to agree on a comprehensive historical narrative for the Big-H.

Or perhaps I should say, getting the Believers to formally define their liturgical catechism, lest Holocaust premises could be contingently falsified─and thus tested─is notably challenging, because the thing about History is that it involves complex viewpoints, and historians just don't agree. Certainly they disagree no less than scientists do in the so-call Hard disciplines.

So Historians disagree─all except for the Holocaust, that is.

The Holocaust, that you must Believe, with a capital B.

The Holocaust is unique for some reason. With the Holocaust you have to agree or else you are the embodiment of something really, really bad.

Holocaust Believers are therefore some of the most rigid reductionists that you will ever find. It is they who are the narrow-minded Theologians of our times. Even the most skeptical Skeptics must concede that they COULD be wrong. That is not ever possible with the Holocaust; it is either Believer or Denier, and that is why it is a Faith-based manichean system and not an empirical and scientific one.

Mr. Baddiel is like most Believers in the Holocaust theology in that they think that the Jews OWN History, and that Gentiles unequivocally OWE the Jews somehow. If we are talking Jews, then, the gaschambers can't be wrong. The mythology is just "true," and most especially so if it didn't even happen.

Prof. of Judaism, Dr. Deborah Lipstadt may be correct in that there is no rational argument to be had here with the Revisionists, they who are beyond the pale of submission to her unknowable, almighty Holocaust deity.

Any Revision is therefore by definition, Blasphemy.

But I reject that. Reasonable people can agree to disagree about many things.

Sure, this idea is not easy. I can certainly attest to that being the case.

You're just another anti-semite trying to rationalize your irrational hatred of Jews, Scott. /sarc
Top

Turnagain wrote: ↑
Tue Mar 31, 2020 6:21 am
You're just another anti-semite trying to rationalize your irrational hatred of Jews, Scott. /sarc

That is a thread stopper, dead in the tracks.

Those of you who missed this claptrap the first time round will have an opportunity to view it on 25th January. I expect it is being shown again as part of the BBC’s build-up to Holohoax Memorial Day.


Kitty Hart-Moxon (1998): "Believe me, I came into Auschwitz in a much worse condition than I actually left it."
Top

Here is an article on David Baddiel’s own racism.


Abuse that went too far 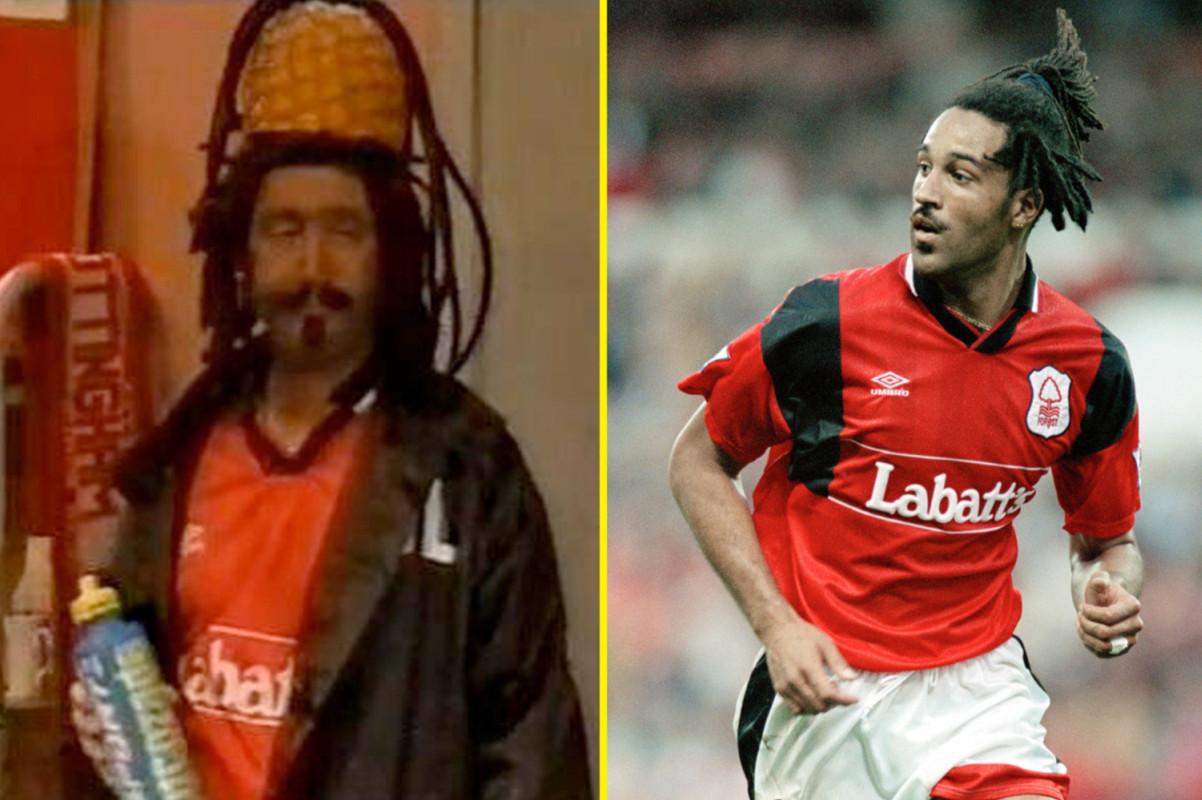 Instead of just talking about football, Baddiel blacks-up and ridicules a black footballer’s african appearance.


Here is an example of Baddiel using the ‘anti-semite’ canard to defend Israel and smear an outspoken critic of Israel. 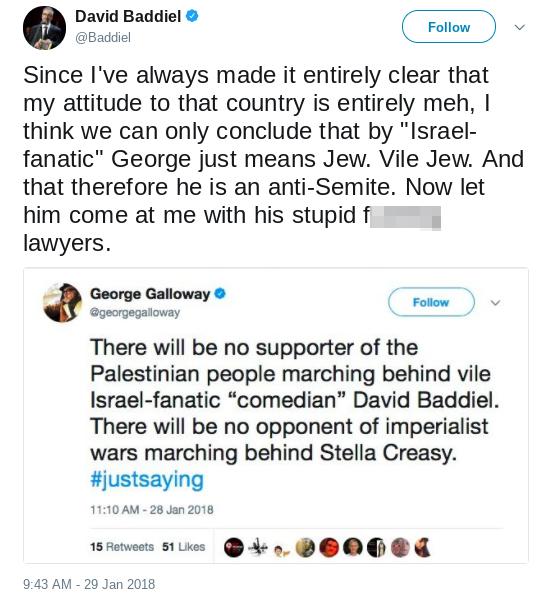 Someone points out Baddiel’s and Britain’s hypocrisy, on social media:

"When people who are honestly mistaken learn the truth,
they either cease being mistaken
or they cease being honest"
-- Anonymous
Top
Post Reply
258 posts