Discuss the alleged Nazi genocide or other wartime atrocities without fear of censorship. No bullying of fellow posters is allowed at RODOH. If you can't be civil, please address the argument and not the participants. Do not use disparaging alterations of the user-names of other RODOH posters or their family members. Failure to heed warnings from Moderators will result in a 24 hour ban (or longer if necessary).
Post Reply
31 posts

Where is this Rube Goldberg contraption you speak of in what is alleged?

I think you're misusing the term "Rube Goldberg contraption"!

A Rube Goldberg machine, contraption, invention, device, or apparatus is a deliberately over-engineered or overdone machine that performs a very simple task in a very complex fashion, usually including a chain reaction. The alleged Kula columns which somehow disappeared certainly fall into this definition.
The wire-mesh introduction columns cannot be found today. The Nazis dismantled and discarded them before blowing up the gas chambers. ..what a load of bollocks...
𝕾𝖔𝖟𝖎𝖆𝖑 𝖌𝖊𝖍𝖙 𝖓𝖚𝖗 𝕹𝖆𝖙𝖎𝖔𝖓𝖆𝖑
𝕲𝖊𝕾𝖙𝖆𝕻𝖔
Top

I should have added above that Hoess didn't know much about the chemistry of gassing. He appears to have associated the amount of zyklon to be used in a gassing with the number of people gassed.

The number of people gassed can't be easily said to correlate with any initial dosage to be used.

So Hoess isn't the best reference on these matters. In my link, Pressac refers to other testimonies about the dosages used in the alleged gassings.
Top

blake121666 wrote: ↑
Sun Jan 26, 2020 6:43 pm
So Hoess isn't the best reference on these matters. In my link, Pressac refers to other testimonies about the dosages used in the alleged gassings.

Tortured people are generally not reliable witnesses; this is why torture has been abandoned. That said it appears that the US still uses it at least until recently.
𝕾𝖔𝖟𝖎𝖆𝖑 𝖌𝖊𝖍𝖙 𝖓𝖚𝖗 𝕹𝖆𝖙𝖎𝖔𝖓𝖆𝖑
𝕲𝖊𝕾𝖙𝖆𝕻𝖔
Top

Turnagain wrote: ↑
Sun Jan 26, 2020 6:08 pm
The point being that the Germans had proven technology in production that could have been used to kill humans on an industrial scale. Why, then, did they resort to cockamamie ad hoc Rube Goldberg contraptions to supposedly kill the Jews? The answer is obvious; they didn't.

Do you think lowering a basket with thinly arranged zyklon on its outer faces down a column is a "Rube Goldberg contraption"?

Where is this Rube Goldberg contraption you speak of in what is alleged?

I think you're misusing the term "Rube Goldberg contraption"!

Your Kula columns are a fantasy. Otherwise their wreckage could still be found in the demolished "gas chambers". Where are these famous instruments of death, Blake? Why weren't they employed in the "purpose built" gas chambers of kremas three and four? (four and five?) Why were tubs of burning coke used to heat the alleged gas chamber? Why did the Germans throw the ZB through the windows rather than use your Kula columns?

LOL, I was checking the link on the Zyklon Discoids booklet, and in skimming through it ...

I noticed that this source directly contradicts Pressac's notion that removing the warning agent for the Zyklon-B that was sold to the SS in wartime was a "criminal trace" for Nazi mass-murder because normal fumigation would never neglect this "important safety feature" (not even by the military during the war).

Here is what American Cyanamid (1938) says about "Warning Gases" on pages 26-27 in their fumigation literature:

It is readily admitted by all authorities that a perfect warning gas, that is, a gas which would warn under any and all conditions, would be highly desirable. However, the subject has been very thoroughly investigated by a number of industries and no warning gas has yet been used or proposed which does not introduce greater hazards, and unless a warning gas is wholly satisfactory it is not satisfactory at all.

One of the many difficulties in connection with warning gases is that they may air out either long before or long after the parent gas. If the former occurs, a false sense of security is created; if the latter, the process of aeration and time of turning the premises over to the tenants, is greatly delayed. [...]

The foregoing are, of course, unusual instances but they forcefully illustrate the unreliability of warning gases. [...]

Until the ideal warning gas is found, city regulations should not attempt to enforce the use of a warning gas but should be so drawn that the ordinary safety precautions which are necessary in all fumigating work, will be strictly observed.

It has been repeatedly demonstrated, that when sensible regulations are enacted and thereafter sensibly administered, fumigating work on a large scale can be carried on without accident.

Discoids do not contain a warning gas, but if specifically requested, will be supplied with a tear gas at an increase in price.

Hello, I found the photograph I was looking for the other day which showed the large can opening punch with the long lever.

It was in the Reference section of this forum and was published in the 1937 English language book "DESGESCH" Methods for Pest Control at the top of page 107.

The illustration pages from 102-126 in the handbook are not numbered but if you open the section with the illustrations at the end, the photograph is only a few pages down from the top.

The larger cans for fumigating a mill or some building were opened with a big can punch opener as in the illustration below.

And the cans with the Zyklon-B discoids used a kitchen style soup can opener that made a large round hold around the edge that the discoids could fit through.

Scott wrote: ↑
Fri Jan 31, 2020 12:36 am
Hello, I found the photograph I was looking for the other day which showed the large can opening punch with the long lever


Thanks Scott, if push came to shove, that opener would be great to open these peanuts if the pull tab breaks. 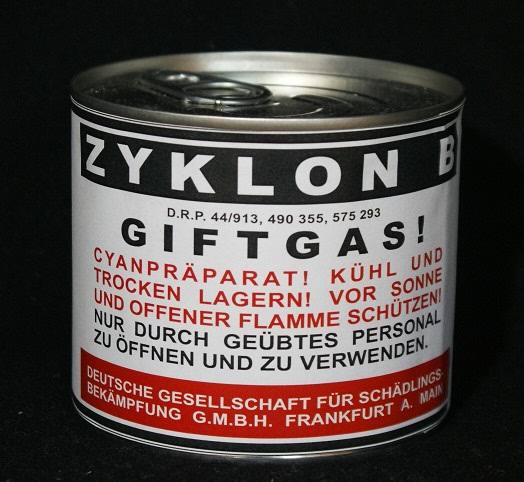 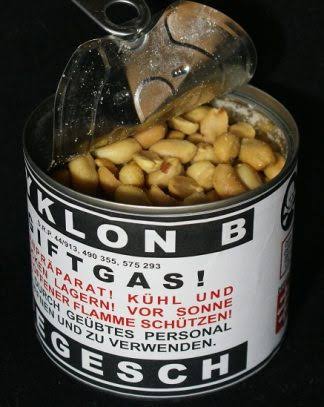 These are available through Reich shipping 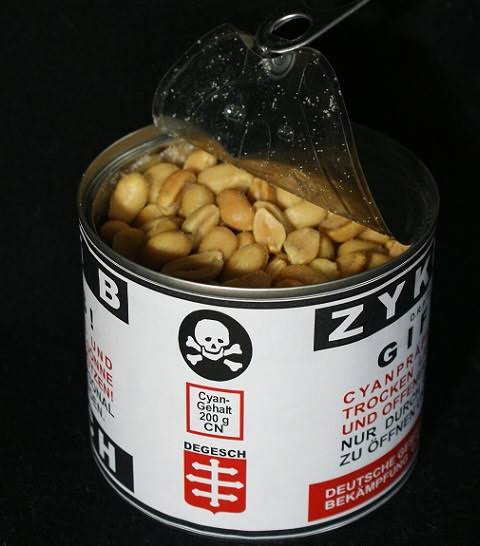 C'mon, Hunt, give us a link to where we can get a can of those. I gotta' have one.
Top “Attention, not poison gas,” reads the product description next to a “Zyklon B” can of peanuts sold for €4.88. “Peanuts in especially lovely packaging. We hear the do-gooders mafia is crying and accusing of [it] of bad taste! The opposite is true -- these are tasteful delicious peanuts of the best quality!” However, they may be out of business, seems that some people in Deutschland are a little upset with them.
https://www.i24news.tv/en/news/internat ... itler-wine
𝕾𝖔𝖟𝖎𝖆𝖑 𝖌𝖊𝖍𝖙 𝖓𝖚𝖗 𝕹𝖆𝖙𝖎𝖔𝖓𝖆𝖑
𝕲𝖊𝕾𝖙𝖆𝕻𝖔
Top

David Irving was once criticized for his wry observation that more people died in the back seat of Ted Kennedy's car at Chappaquiddick than in Krema I at Auschwitz.

Now it can be told that all along it was Mr. Peanut's and not Dr. Mengele's monocle featuring prominently in the ubiquitous narrative of the gaschamber death selections.

And who could have guessed that simple lightly-salted goobers were responsible for more capricious killings via allergic reaction than unlimited cans of Zyklon-B fumigant could have ever hoped?

Forget about Dr. Mengele and his non-existent monocle, if there is any justice in the world, the late Mr. Peanut now basks eternally in the honey-roasted fires of hell. 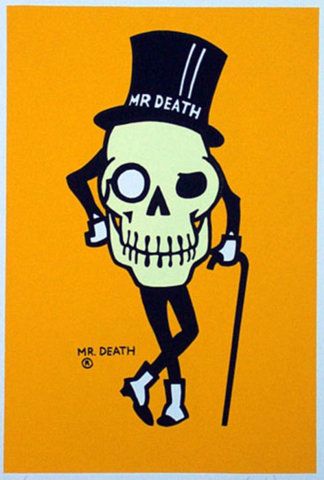 “Now we have forced Hitler to war so he no longer can peacefully annihilate one piece of the Treaty of Versailles after the other.”
~ Major General J.F.C. Fuller,
historian – England
Top
Post Reply
31 posts