by Jim Russel
Nobody here from Germany or Austria can mention the imprisonment of Haverbeck and the Schaefers under Section 130? Wow!

I've never made a Facebook page or had a Twitter account. There are two kinds of people. The masses are social creatures seeking a leader and guide ... and then a small minority who think for themselves and some of those might gain a following because what they say is appreciated by the masses who can't think for themselves. When I was growing up we talked about finding a guru. But that's no longer mentioned in this New WOrld Order of political correctness under cultural marxism.

Who could be a new leader, Ron Unz maybe? In Germany any new leader with a nationalist message like AfD is likely to be imprisoned. France did or would do the same with Marine Le Pen if they stray too far from the approved messages.

But we have freedom in the US, at least for speech, more than any other country in the world. Private companies can censor books because it's a free market. And employers can fire employees for making campaign contributions to candidates their employers disagree with.

Over the last decade, Amazon has gained a near-total monopoly over Internet book sales, and late last month, we saw the dangerous consequences of such intellectual control as the company suddenly banned dozens of books, many of them of excellent scholarly quality. Apparently, activist organizations such as the ADL and the SPLC had succeeded in pressuring the company to ban those works to avoid any risk that American readers might become “confused” on certain controversial historical matters.

In an extremely ironic twist, several outstanding works of black historiography were banned at the height of Black History Month, presumably because they provided a far more complex and nuanced view of the historical relations between blacks and Jews than the ADL and those in its orbit have long promoted. In particular, one of the volumes published by Louis Farrakhan’s Nation of Islam, which I had only discovered and read last year, seemed to conclusively demonstrate that the circumstances of the ADL’s own establishment a century ago were almost exactly contrary to what I had long believed based upon my standard history books.

Clearly, the ADL was loath to have others discover these same facts, and must be pleased that Amazon has now banned the work in question. I covered this and the various other Amazon book banning in a lengthy article a couple of weeks ago.

Although various people have discussed plans aimed at pressuring Amazon to retract its policy and I have even provided them some suggestions in that regard, it is not at all clear whether a company with a market value of nearly $900 billion will be swayed by a few intellectual malcontents. Indeed, the far greater likelihood is that large numbers of additional books will eventually be “disappeared.”

This small webzine was founded with a mission of providing “interesting, important, and controversial perspectives largely excluded from the American mainstream media.” Therefore, it seems natural to extend this policy to cover books, and I have now added a new Bookstore Section, allowing interested readers to browse and order those texts that Amazon has banned, in most cases directly from the websites of the particular publisher. As a start, I have stocked it with the hundred-odd books banned by Amazon but still available elsewhere on the Internet.

A half-century ago in a totally different America, publishers sometimes trumpeted the fact that their books had been “Banned in Boston,” which vastly increased their sales in many other parts of the country. Since past sales of the banned books had hardly been great, it seems not impossible that the notoriety associated with their removal might actually boost their visibility and purchase sufficiently to render the policy counter-productive.

How can you think you have any freedom when your country now imprisons Ursula Haverbeck, Sylvia Stolz, Alfred Schaefer, etc.?

My understanding is that the law in Germany at Section 130 against "inciting hate" requires that people ignore the truth of their own country's history and requires them to embrace the lies of a ruling minority group. If your new leader from the NPD can't speak truth, how can you be free?

Global warming is a fact, the scientific evidence is clear and it is highly correlated with human activity. The issue in Germany is Jüdin Merkel who will be out of power soon; if rules can be put in place than can as easily be removed with the right people. You do not get the right people in power with high contentious issues that divide people.

by Jim Russel
It's straight out of Alinsky's Rules for Radicals and the Protocols to sow dissension based on false premises.

We're now coming up to the elections on May 23 just two weeks away for the EU parliament in Brussels and the nationalist parties in several countries gathering huge leads in some of the polls and a supposed national socialist revolutionary trots out global warming as being the only issue worth defending. Section 130 is just a trivial technicality? It's quintessential and very transparent controlled opposition if they think that perpetuating the global warming hoax is more important than freeing the Germans, Austrians, and French whose only crime was to publicly refute the lies of the jews.

Scratch what I said about AfD being a true right-wing nationalist party in Germany that represents a challenge to the established rule of foreign occupiers. Global warming, my ass.

Björn Höcke might be the only German nationalist politician who doesn't work for the jews: https://www.thelocal.de/20170511/merkel ... tions-2017

by been-there
.
Anyone have any news on Ursula Haverbeck.

I presume she is still serving the two-year prison sentence in the Bielefeld-Brackwede Prison, imposed upon her by the Verden District Court and that it will end next May.

She was in the news this May after seeking election to the European Parliament as an MEP representing the political party Die Rechte ("The Rights").

On Tuesday May 7th of this year — on the one year anniversary of her imprisonment — there was a demonstration consisting of about forty supporters and even more counter-demonstrators, outside the gates of the Brackwede Prison in Bielefeld which is incarcerating her.

But since then I couldn't find any news about her. 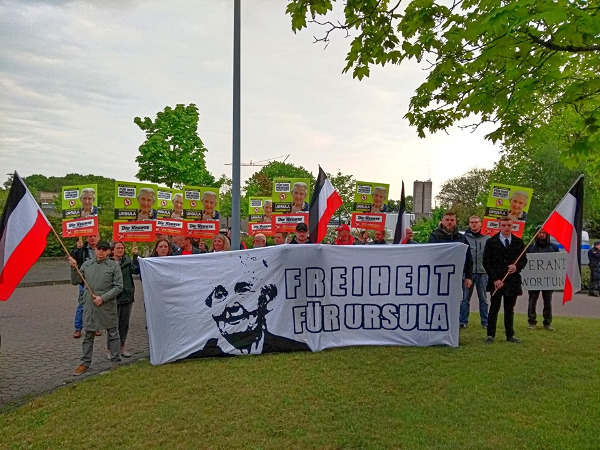 About 40 supporters of Ursula Haverbeck gathered at 7.30 pm. They faced a larger group of counter-demonstrators from a group calling itself 'the Bielefeld civil society’.

Assembly leader Sasche Krolzig opened the rally and gave an overview of the developments surrounding Ursula Haverbeck which have occurred since April 2018, when her conviction was temporarily overturned, especially in the days before and after her imprisonment in May 2018.
As a second speaker Michael Brück pointed to the countless harassments with which the European election authority was trying to obstruct the candidacy of Ursula Haverbeck — for example, the federal office of THE RIGHT was searched under a flimsy pretext and their entire paper communication confiscated. The former Dortmunder fire chief Klaus Schäfer, who took the floor as the third speaker, addressed the lack of freedom of expression in the Federal Republic of Germany. He is directly connected with the fate of Ursula Haverbeck and has himself to answer in a legal dispute also. This is because of the controversial section of the People's Prohibition 130 due to having shown solidarity himself with Ursula who is deemed to be a 'dissident'.
Between the respective speeches the radio commercials of the party THE RIGHT, as well as pieces of music were played. The solidarity action — as well as the previous rallies and demonstrations — ended with the playing of Ursula's favorite song "The thoughts are free".
It was assumed that Ursula could hear that there were speech and music contributions behind the dungeon walls. The Bielefeld local press also reported in detail in advance of the action and contributed to each citizen knowing about the sad anniversary on 7th May 2019.

Beyond the European election campaign, it is also important to support Ursula Haverbeck and to stand up for her release. It will not be the last time nationalists demonstrate in Bielefeld. As long as Ursula Haverbeck is imprisoned in this city, the national opposition will seek publicity and show solidarity. Because the demand is clear and non-negotiable: Freedom for Ursula Haverbeck, stop this unethical injustice against a 91-year-old lady! 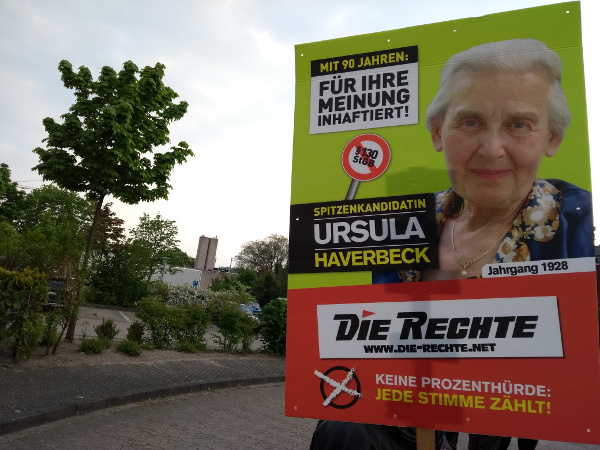 by Turnagain
The Jews are working relentlessly to prohibit the Political Correct concept of "Hate Speech". They have the aid of their minions, the "Social Justice Warriors" and social and political "Liberals". It took them forty years to overturn the Reed/Johnson immigration act and achieve "Diversity" and "Integration" but they succeeded. Now they sow division amongst the ranks of their opponents with such claptrap as "climate change" while Western countries are being overrun with third-world illegal immigrants from every corner of the globe. There seems to be some signs of an awakening but only time will tell if it is sufficient to carry the day or if it's too little, too late.

Turnagain wrote: ↑
Fri Jun 28, 2019 6:05 pm
There seems to be some signs of an awakening but only time will tell if it is sufficient to carry the day or if it's too little, too late.

I have seen some flickers of flame turn into roaring bonfires. Time is hard to tell but the masses are beginning to realize they have been conned and Jude are in part to blame. To get the working class to unite under one banner (ours of course) will be timely and tricky but will be done. The people of the world need better treatment and dignity than what they have received so far. This so called "trickle down" effect is merely a myth to disenfranchise the workers. What is happening by these Jude is known by Mr Putin, so some are waiting for Mr Putin to fire the first salvo at Jude; not at them personally but their corrupt economic system.
While National Socialism was really Deutsche Socialism it has now expanded to become global 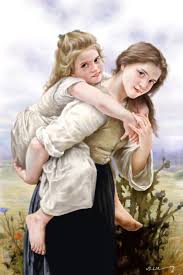 by Turnagain
You may like this site, Hunt. https://voat.co/ Pretty much a free-for-all but they do have a handle on the JQ.
All times are UTC+01:00
Page 2 of 2