Discuss the alleged Nazi genocide or other wartime atrocities without fear of censorship. No bullying of fellow posters is allowed at RODOH. If you can't be civil, please address the argument and not the participants. Do not use disparaging alterations of the user-names of other RODOH posters or their family members. Failure to heed warnings from Moderators will result in a 24 hour ban (or longer if necessary).
Post Reply
63 posts

Hand nailed to head in Konzentrationslager 1933 by Nazis who wanted to kill her at 3 years old. Tortured, sterilized and forced to wear a knife necklance. Eat poo and nails in a skull.

According to Kurt Glass, Ilse Koch has "Mummified human thumbs as light switches in her house." History Collection
If the human thumb light switches were ever found, they were not introduced as evidence into the trial of Ilse Koch.
I wonder what she used for a door "Handle"? 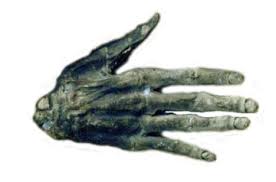 Director of Christian Friends of Yad Vashem Sari Granitza, who isn’t even Christian but Jewish, shows the museum’s archives. Out of millions of documents in Israel’s Holocaust Museum archives not one document proves murder or gas chambers. Yad Vashem’s testimonies also include numerous fakes.

Sophie Hingst submitted 22 fake testimonies to Yad Vashem. The fraud was uncovered by a German newspaper investigation. The Times of IsRa-el German historian Marie Sophie Hingst has been stripped of a “Golden Blogger” award following revelations that she faked a family history of suffering in the Holocaust.

According to Der Spiegel magazine, which broke the story (in German) this week, Hingst — who lives in Dublin and is in her early 30s — sent 22 pages of testimony for nonexistent people to Yad Vashem, Israel’s Holocaust memorial and archive, in 2013. She reported about her “family” in her blog, “Read on My Dear, Read On.” The blog is no longer online.
Der Spiegel says:
Marie Sophie Hingst spreads a fictional Jewish family story - online and in Yad Vashem, where she submitted false victim documents. Her grandfather was not an Auschwitz prisoner, but a Protestant pastor. She was found dead in Dublin on July 17th last year; this was an apparent suicide.

While Marie Sophie Hingst work was a fake, so were the rest of them; perhaps thousands of other jüdisch story tellers took their own lives.