The big lie — people coming out of it.

Discuss the alleged Nazi genocide or other wartime atrocities without fear of censorship. No bullying of fellow posters is allowed at RODOH. If you can't be civil, please address the argument and not the participants. Do not use disparaging alterations of the user-names of other RODOH posters or their family members. Failure to heed warnings from Moderators will result in a 24 hour ban (or longer if necessary).
Post Reply
105 posts

Here is what Juden say about their suffering.
Expulsion of Juden from Muslim countries

There is lengthy discourse about the poor innocents suffering at the hands of others, without of course a mention of what they have done to deserve just rejection. They did the same in Poland after Pogroms from Poles without stating how they sold the Polish Population down the river to the Stalinist red army and thew them under a bus.
I like this final plea, how they grovel that Palestine is theirs.
Zionism is the culmination of a process of self-determination, from a dominated nation in the Arab-Muslim world to an emancipated one within this world – that is, in the Middle East. There has been a population exchange. Israel’s “original sin” is a fiction. These are the historical and political facts on which Jewish discourse must be founded. It is time to take back the initiative and restore the Jewish narrative.
These people are enough to make any person bulimic. Does the ordinary pinocchio know that their existence is a lie? I think not, so they can be left to pray at their candelabras; it is the international variety that needs closer scrutiny. Until then they will try and put people into lies quicker than quick sand sucks down a car at the beach, quicker than Goody can slap its thighs with rhubarb leaves.

Here that jews?
In some circumstances it can be rationally assumed that if a certain event had occurred, evidence of it could be easily discovered by qualified investigators. In such circumstances it is perfectly reasonable to take the absence of evidence of its occurrence as proof of its non-occurrence.
Such is the case for the fraudulently alleged holocaust mass graves: No graves = No holocaust - simple as that.
Top

Less remembered are the mass graves in Eastern Europe at the edge of which the Nazis shot 2.2 million Jews.

Of course the High Priest Desbois is hiding his Jude nature by hiding behind the Church. It has made assumption prior to starting that the Germans killed people without considering the possibility of NKVD executions. This Desbois will be considering all Juden innocent of terrorist activity when in fact they were all Partizan. It was also a major theatre of war where millions died in battle. According to some estimates, Soviet barrier troops may have killed as many as 150,000 of their own men over the course of the war, including some 15,000 during the Battle of Stalingrad. Nearly one million Soviet women took up arms and served on the front lines of World War II as anti-aircraft gunners, snipers, partisan guerillas and even fighter pilots.

This Desbois is far from impartial and exposed for the fraud he is.

Fascinating! So he admits “Holocaust deniers [revisionists] are getting stronger and stronger” whilst promoting a shift in focus from the refuted mass-gassing narrative to a new emphasis of "holocaust by bullets".
And this after 70 years of persecution of anyone daring to question the mass-gassing allegation!?
"When people who are honestly mistaken learn the truth,
they either cease being mistaken
or they cease being honest"
-- Anonymous
Top

The incessant hoaxer whine of, "Where did they gooooo!" has become a centerpiece in the holyhoax big lie. That there are no records of Jews being sent elsewhere from the AR camps has become a rallying cry of the hoaxers. The glaring fault in this specious bullshit is the fact that there aren't any records of anything leaving the AR camps. All such records have been destroyed (or "lost") but not even any records of trains leaving the AR camps are still in existence. NONE, zip, zero, nada. Claiming that the lack of records somehow proves that the Jews were gassed, buried, etc. at the AR camps is the same as saying that the lack of records proves that all of the trains that arrived at the AR camps are still there.

There is eyewitness testimony from the USC film clips of Jews transiting through Treblinka and the records from the USHMM but that is denied and ignored by the hoaxers. Is it "proof" that the AR camps weren't extermination facilities? Of course not but it is very good evidence that the AR camps acted as transit camps. Instead we have a handful of bone shards of unknown origin and the morphing of CS-C's irregularly shaped and undefined "possible" graves into positively identified mass graves. Such is the drivel offered as proof of the holyhoax by the hoaxers. So it goes in holyhoax la-la land.
Top

Turnagain wrote: ↑
Wed Nov 20, 2019 9:07 am
Instead we have a handful of bone shards of unknown origin and the morphing of CS-C's irregularly shaped and undefined "possible" graves into positively identified mass graves. Such is the drivel offered as proof of the holyhoax by the hoaxers.

Eran Elhaik..Molecular Biologist
People are coming out of it, but in a manner different to just the non acceptance of the Holyhoax committed by the Bolshevik Juden and Zionists. European Juden, the ashkenazi accept that they are Khazars, the Caucasus being their homeland. Many wish to return. Untermyers work of deception was for nothing; the Zionist dream has collapsed as it was a myth from its inception. Eran Elhaik, a Molecular Biologist has proven that Ashkenazi Juden’ roots lie in the Caucasus and not the Zionist inspired Middle East and the fake diaspora. His scientific work confirms the theory of "The 13th Tribe' by Arthur Koestler" and supported by other geneticists who have argued that the contributions, genetic and cultural, of the Turkic-Iranic Khazars deserve much more attention than the cosseted theories of European Zionist Juden. These jude dominating Judaic studies and the official views of the state of Israel on Jewish history, which insist on a Middle Eastern or Near Eastern component for reasons of sovereignty and nationalism.
Jüdisch IV is defined as a marker result exhibiting an STR (short tandem repeat) value of AAGG)(AAAG)(AAGG)(TAGG)(AAGG)12 on Chromosome 19 routinely tested in DNA Fingerprint family of products, introduced in 2006. Autosomal STRs are the basis of DNA Consultants’ forensic method of population matching because of their low mutation rate and ability to predict ancestry.
No other DNA testing company has Ukrainian or Jüdisch marker data.

That said the Reich, like the Soviets were well aware that the ashkenazi were in fact from the former Khazar empire and possibly had intention to resettle them back in that early homeland, which they held for 800 years near the Caucasus; sadly the war got in the way of that ambition. However, today, the non Zionist Khazars including the government of Israel recognize that they are not genetically linked to the "Chosen of El" (Israel) and recognize that their real home is in the area of the Black Sea where much the Crimea now is. In fact many have a desire to return to their real roots and not the mythical home of the Zionist Juden for which there is no connection genetically or culturally except in so far as the religion of Judaism was adopted.

The truth is that these people who called them selves Juden realize that they have been duped by Zionists and that genetics have shown their true home. There was some disupute (still is) with political Juden only viewing the data to suit their agenda, which is both religious and political; they wish to hold the myth of a group of lost tribes emanating from Canaan. For years now, the findings of Ostrer and several other scientists have stood virtually unchallenged on the genetics of Jews and the story they tell of the common Middle East origins shared by many Jewish populations worldwide.

However, Eran Elhaik (born 1980 in Israel) is an Israeli-American geneticist and bioinformatician. Elhaik says he has proved that Ashkenazi Jews’ roots lie in the Caucasus; this research is now accepted by the Government of Israel as being fact.

Now that the Zionist Juden have lost to the Khazarian people who practice Judaism, the alleged holocaust may have little relevance now. This is a scenario that Untermyer and other fabricators and manipulators of statistics and media did not foresee. 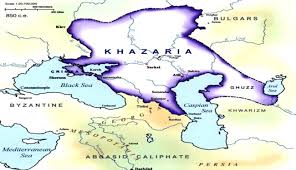 The fact is that the true function of Treblinka is unknown until more evidence is found. The fact that it like the other AR camps were on the precise borders of the Reich-Soviet demarcation line after the Ribbentrop pact would suggest a use to do with border controls, probably eviction into the Soviet Sector. After the invasion of the Russias then the camps would have assumed another function which would have most likely been related to labour placements and delousing; the fact that these camps were Statistical collection points means that these were the last points of gathering population data prior to labour dispersal.

A necessary part of labour placements is hygiene due to diseases, especially caught in the crowded conditions of the ghetto; this would mean proper sanitation especially showering. All shower places use tiles. It is also no coincidence that these shower facilities of hot steam coming out of the doors were misconstrued as lobstering rooms, morphing into gaskammer.
Flipper picks up the hoax at clowns and says the following:

The tile is an important piece of physical evidence because witnesses describe such tiles as being used inside the gas chambers.

The most obvious use for a tile is showering facilities.

Ha ha. Yes. "Where did all the trains go if you don't believe they were melted down on open pyres at T2 then buried under the ground and hidden by spreading some sand?"
"When people who are honestly mistaken learn the truth,
they either cease being mistaken
or they cease being honest"
-- Anonymous
Top

Ha ha. Yes. "Where did all the trains go if you don't believe they were melted down on open pyres at T2 then buried under the ground and hidden by spreading some sand?"

Here's Nick Fuentes denying questioning in March of this year (2019) whether six million 'cookies' could have been 'cooked' in the amount of ovens claimed during the time period claimed, etc., etc.

Amazingly its still up on Jootoob. Here it is on an outraged person's twitter feed should it get taken off of jootoob soon, or if they have made it impoosible to view in your country of domicile:


Here's another version on jootoob And here it is on bitchute:
"When people who are honestly mistaken learn the truth,
they either cease being mistaken
or they cease being honest"
-- Anonymous
Top
Post Reply
105 posts