Your experience with the CODOH forum and its moderator

Discuss the alleged Nazi genocide or other wartime atrocities without fear of censorship. No bullying of fellow posters is allowed at RODOH. If you can't be civil, please address the argument and not the participants. Do not use disparaging alterations of the user-names of other RODOH posters or their family members. Failure to heed warnings from Moderators will result in a 24 hour ban (or longer if necessary).
Post Reply
28 posts

Your experience with the CODOH forum and its moderator

It's useful to collect your experiences with CODOH's forum and its head moderator. He and others are in denial of it's entirely closed nature.

Perhaps a bit of RODOH's history and founding is worth repeating as well.

I've received numerous complaints from banned Revisionists throughout the years about the CODOH forums. I can only imagine the "believer" or moderate skeptic's point of view.

It became clear to me the forums and its moderator are one reason "denial" hasn't been long ago refuted, at least in the scene we are involved in. At least why there haven't been more skeptics, say, like me, who came to this conclusion. It is obviously an echo chamber. Evidence which proves mass gassing and cremation is hidden there by its moderator, in his own posts and censorship.

I'm told I'm banned there as a person because I can't access an account last used two years ago. If it weren't that it'd be another excuse. I can easily refute the head moderator Hannover's outrageous falsehoods. His "laughable spaghetti people" falsehood was already debunked in my article. Because I'm banned I can't hold him to the facts. The original is no forgery.

One really easy falsehood from him is now including a photoshopped version of the Crema 5 sonderkommando photo from a silly Discover channel ghost investigation show as proof the original image is a fake! (The first image with the logo on the right) 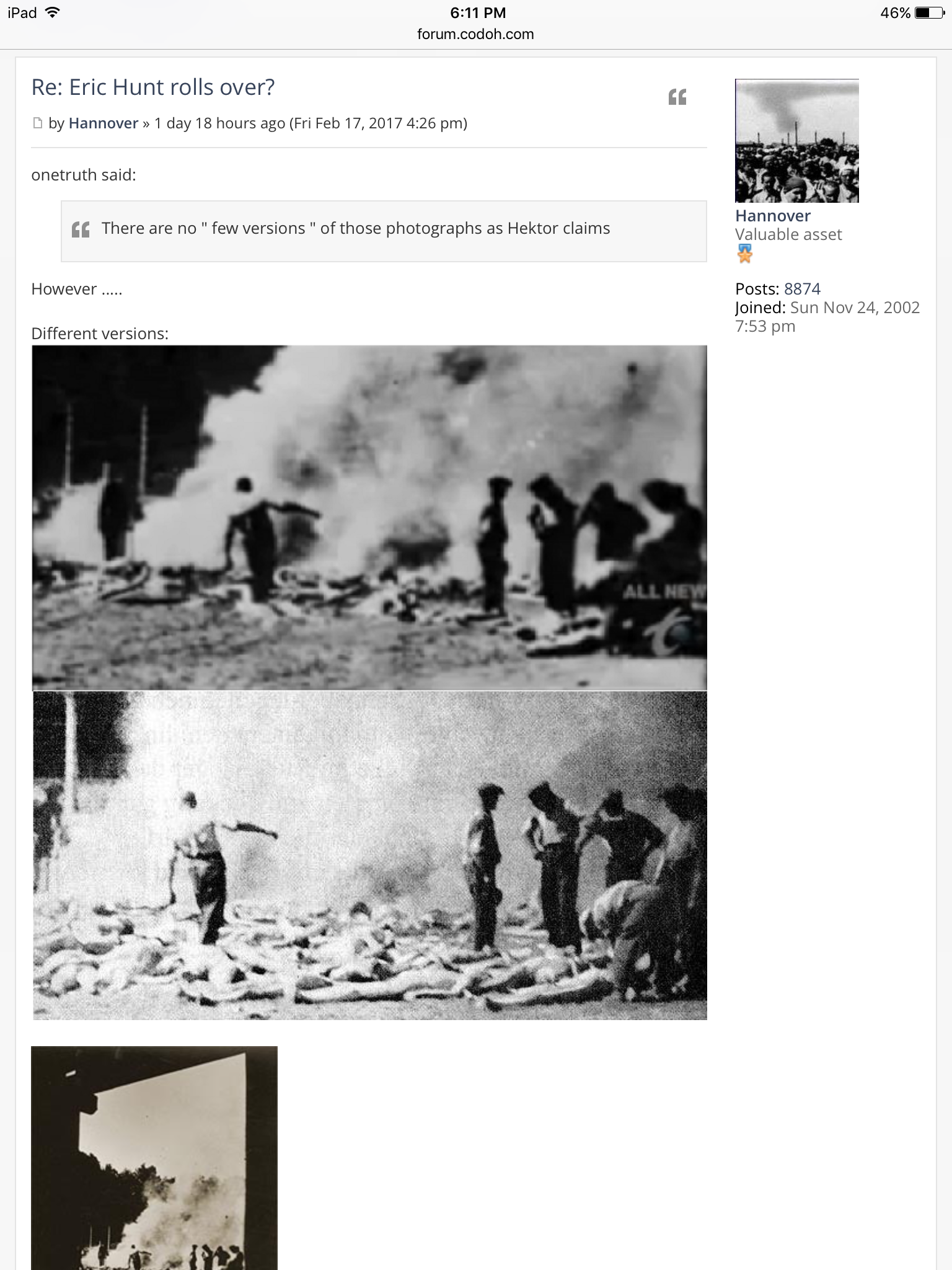 It's obvious "Hannover" is a complete fraud and does not believe in open debate.

His senseless falsehoods and creation of new conspiracy theories, and knee jerk "muh forgery" is indefensible, which is why I and others are banned.

What are your experiences? Did you come to Real Open Debate on the Holocaust from those closed forums?
Top

My experience has been dire and the censorship and double standards are clearly designed to protect the very weakly evidenced denialist belief.

Yeah, I tried CODOH first and the experience was bad.
The moderator erased and edited content from my posts and prevented me from asking out-of subject questions but allowed himself to ask such questions.

To elaborate, I was required to answer every irrelevant question the deniers came up. A direct answer from me was countered with a bunch of additional questions. If I refused to answer a million times to the same essential questions, it was considered as dodging the question. Presenting my own questions was impossible because the moderator just erased the questions from my posts.

Finally, access to my profile was prevented- or at least I haven't been able to log in after my debate.
Top

You are moderated at CODOH forum because you refuse to play by their rules.

I agree completely with Eric Hunt about [name] and CODOH. [name] is a congenital, repeat LIAR and a bigot! Shame on all who support or defend such creatures. For [name], his infamous "guidelines" are merely his excuse to suppress "open debate." The very name of the organisation is nothing more than a BIG LIE!

By the way, why can't you use the "forgotten password" feature at CODOH, do you not remember the email you used?

If you enter the wrong email, the system reply with "The email/username information submitted could not be found."

If you entered the correct email, you should 100% get the email sent to you - check the spam folder.

If you are indeed banned (can be a hidden ban, so your profile appears to everyone like it's active and normal - this is just another typical CODOH censorship tactic, so it looks like nobody actually gets banned from CODOH), then the system will reply with "You are not authorised to request a new password."

Eric has put on the victim dress and he badly needs a villain! So he makes up a stupid lie to go hand in hand with his equally stupid belief in the alleged ‘holocaust’.

I gave that feature a try myself after I saw your post and sure enough an e-mail arrived just moments later, almost instantaneously.

By the way, why can't you use the "forgotten password" feature at CODOH, do you not remember the email you used?

If you enter the wrong password, the system reply with "The email/username information submitted could not be found."

If you entered the correct password, you should 100% get the email sent to you - check the spam folder.

If you are indeed banned (can be a hidden ban, so your profile appears to everyone like it's active and normal - this is just another typical CODOH censorship tactic, so it looks like nobody actually gets banned from CODOH), then the system will reply with "You are not authorised to request a new password."

Who cares if it works for you? It doesn't work for me. What rational excuse is there to ban me as a person for whatever reason not being able to access an account I last used two years ago. Their software says the password will be sent to me, and it isn't.

There is no un-biased reason to ban me. If I were still goose stepping along on their wild goose chase I'd have no problem posting under a new account.

I posted there as "CODOH Video" when I was working with them. Should I have been banned because I wasn't posting under my two year old account? Quick, ban that account too!

As Fritz says, the name of the organization is a big lie. I came to this as part of this conclusion and before they even started this banning. There's no reason for me to not be able to use a new account.

Other than the fact that I can easily destroy all of
"Hannover"'s falsehoods, which now include new, libelous inventions he himself makes up. As his signature says, only lies need to be shielded from debate.

As we know, K0nsl, it's censorship for conclusions neither of you like. You did the same thing.

You see me posting here on a new account on REAL open debate on the Holocaust. It's no big deal whatsoever. It's not even an issue.

Let's say I lost access to the email account I signed up under seven years ago. Does that mean I'm banned for life from the forum? Laughable

They won't let me on. It might be because I tried to register as Benjamin Israel.

Gee, CODOH really owns some of you guys.

Apparently an 'Eric Hunt' likes sockpuppets while ignoring the fact that he is not banned or censored.

Anyway, someone named Eric Hunt is however taking a beating with his forced surrender:

I'm curious, has anyone been out the country lately?
Top
Post Reply
28 posts