Discuss the alleged Nazi genocide or other wartime atrocities without fear of censorship. No bullying of fellow posters is allowed at RODOH. If you can't be civil, please address the argument and not the participants. Do not use disparaging alterations of the user-names of other RODOH posters or their family members. Failure to heed warnings from Moderators will result in a 24 hour ban (or longer if necessary).
Post Reply
477 posts

This adds nothing to the discussion but shows the intention of this poster, to inflame and troll.

Just Lupus and Welsh dropping their usual insults in an attempt to obfuscate the point of been-there's post. Indeed, why would the BBC be printing a story about the holyhoax as a "feature"? Why should the holyhoax receive such attention when the Holomodor, the Watusi/Hutu genocide or any other genocide receives scant to no mention? Where are the regular reminders of Pol Pot and the Armenian genocide?

As you say, Lupus and Welsh add nothing to the discussion. Their intention is to derail it.

Why would the BBC also include a report about a garbage heap in Asia on the same page ? Or an article about dreams ?

Been There's strange post was a desperate attempt to pretend that the BBC are bombarding us poor little licence payers with Holocaust propaganda, but he failed miserably .

What are you talking about? The Holocaust is featured by the BBC in some form or another, every single year.
Top

.
Check this out for chutzpah. It is one of the eternal 'news' articles about 'the holocaust'.
This one is about the money STILL being paid as ‘reparations' to Jewish groups, this time being paid BY THE DUTCH!!!!!!
Yes, even the Dutch have been bamboozled into paying out money to Jewish organisations claiming it is what they are owed after their unique and 'special' suffering during WW2. (Er... was anyone else actually in that war? Did no-one else suffer?)
Even NOW — at the current time, seventy-eight years later — Jews are STILL going to get 5 million Euros ($5.6 million) from the Dutch.

But are they happy?
No!!
Not content with their succesful financial exploitation of the rest of the world utilising their pseudo-history for profit, but now “Jewish groups” behind this shameless shakedown are “angry” because of the way that emotional blackmail has been paid.

Chair of Operations of the World Jewish Restitution Organisations said:
'This is something to be dealt with... in cooperation with representatives of victims'

Jewish organisations criticised the Dutch national railway company Monday for not adequately consulting them in discussions to work out a form of recognition for Holocaust victims the company transported to camps in the Netherlands during World War II ... [blah, blah, blah, blah]...

The anger came after the railway company, NS, announced Friday that it would donate 5 million euros ($5.6 million) to four Dutch memorial centers as a gesture of collective recognition... [blah, blah, blah, blah]... 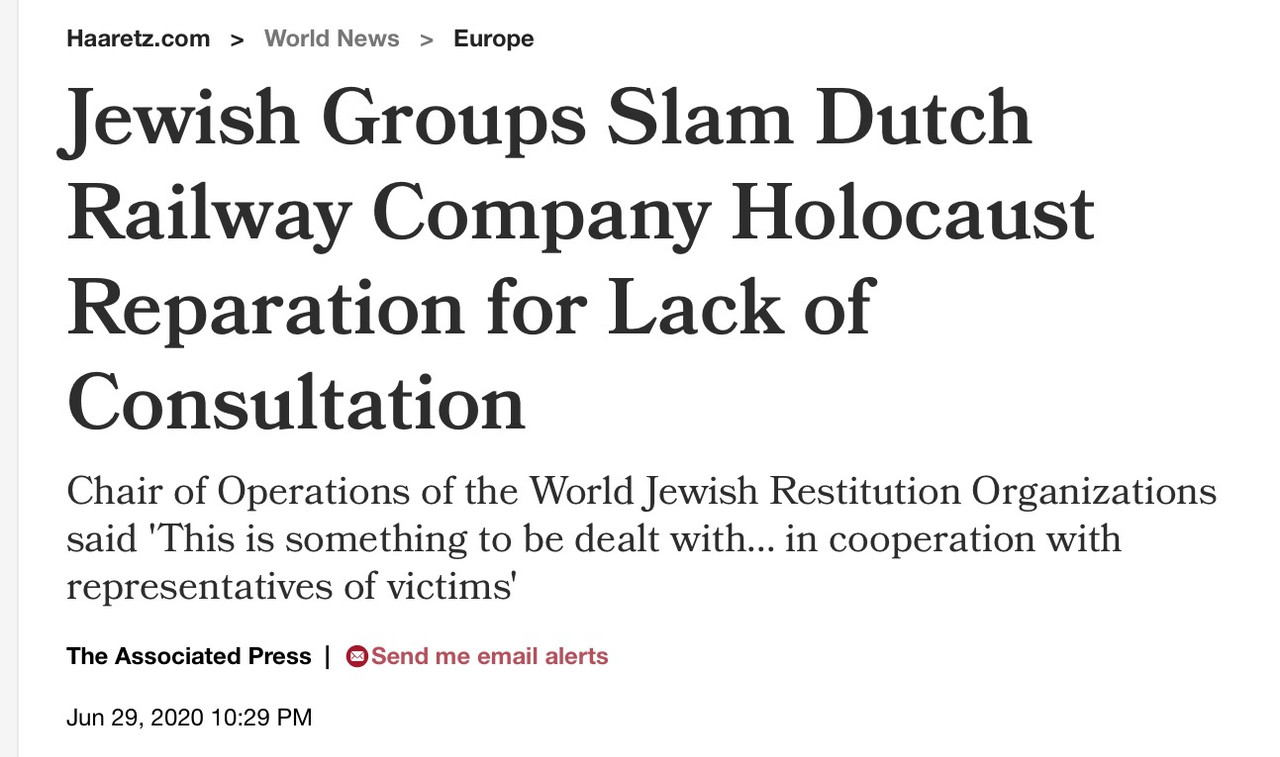 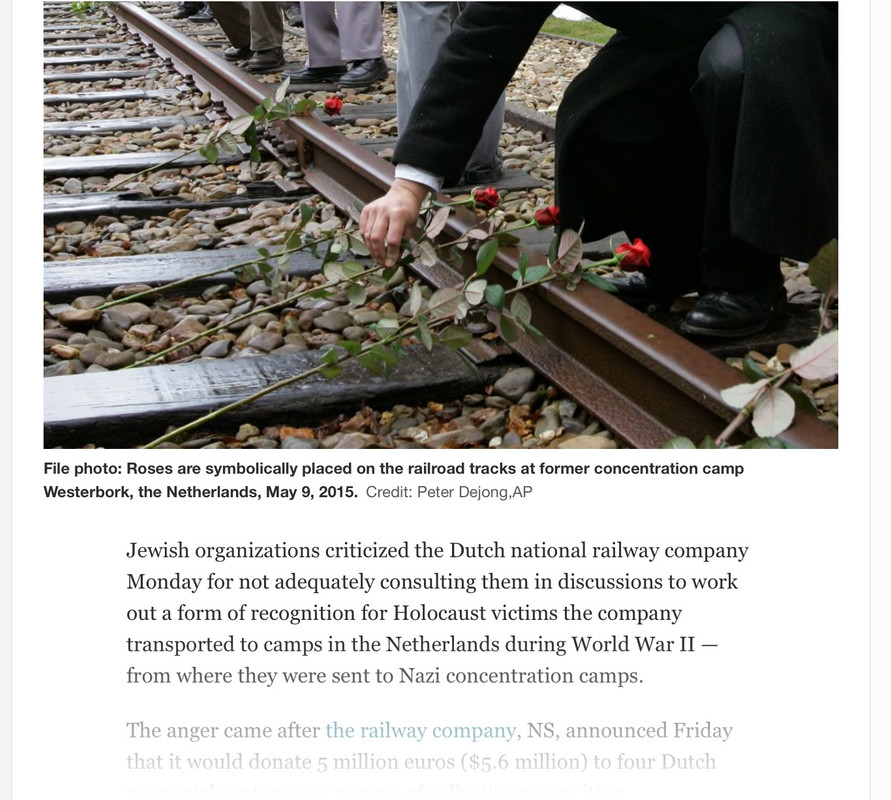 Jeezus H, but 75 years after the supposed fact, the Jews are still shaking the holyhoax shekel tree.
Top

It would be necessary to invest a holocaust of sorts as they had been doing since the late 1800s.

.
These people have been traumatised by their own deceitful, self-centred mythology.
Well, naturally. It is a narrative built upon lies, exaggerations and vengeful, racist hatred. What did they expect?

Here a rabbi tries to fix it.
And of course it's a great excuse to write another 'news' article about something that is supposed to have happened nearly eighty years ago.

It's an interesting article for what it has to acknowledge. For example what the Rabbi calls “the ‘Holocaustization’ of Jewish life and of American life in general...” which he argues is a good thing as now we all share something... a new belief system.

He also admits that the "gate at Auschwitz" has "joined the pantheon of sacred places".

It's psychotic, I keep tellin' ya! 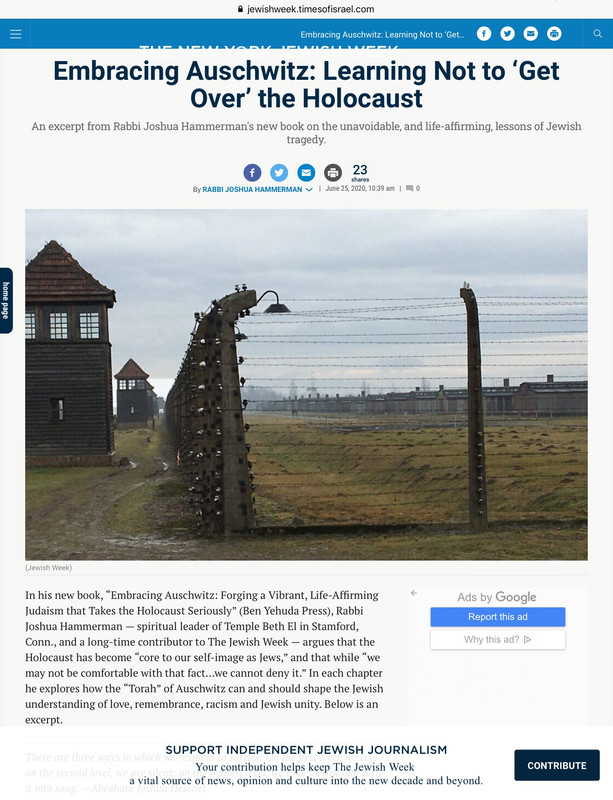 Let me get this out there right from the start, so that there will be absolutely no confusion: There was nothing good about the Holocaust. What happened during the period of Nazi hegemony over Germany and Europe, from 1933-1945, was the nadir of human history. No other historic event is remotely comparable, and it is hard to conceive of any future atrocity being so maliciously designed and meticulously carried out on so vast a scale.

...The Holocaust was bad, no question about it.

...It is time to embrace Auschwitz. Not to get over it and not to become desensitized to what took place. On the contrary. It’s time to fully incorporate its lessons into our souls; to recognize that in fact the Holocaust is not only part of our story, it frames our story; it is our story — and our greatest responsibility and honour is to bear witness and to share that story.

...For most of my life, I felt that the Holocaust took up far too much Jewish bandwidth, that it smothered joy and suffocated Jews with guilt and resentment. It posed questions that were unanswerable. It eclipsed centuries of Jewish achievement and it brought out the worst in people. It gave us an excuse to hate...

here is the conundrum that has prevailed among Jews since at least the 1970s, when preoccupation with the Holocaust became pervasive, as survivors began to discover their collective voice and many people began to take notice. It was necessary to place the survivors’ experience front and center, especially as Jews fought anti-Semitism on so many fronts, particularly in the Soviet Union and at the UN. We craved to live lives of joy, love, acceptance, community, hope and faith. But as Jews looked out there at the cultural landscape, what did we see? Everywhere we turned, being Jewish and the Holocaust became virtually inseparable.

The “Holocaustization” of Jewish life — and to only a slightly lesser degree, of American life in general — might sound ominous, but I contend that precisely the opposite is true. In fact, for a Jewish people currently being ripped apart along political, religious, demographic and geographic fault lines, a deepened connection to the Holocaust is just about the only thing that everyone shares. It is what Jews are most passionate about.
Pilgrimages to Poland, such as the one I experienced with my congregants recently, are now taking their place alongside trips to Israel on the bucket list of world Jewry. In the pantheon of sacred places, the Western Wall is being joined in this “Wall of Fame” by the walls surrounding the Warsaw Ghetto and the gate at Auschwitz proclaiming “Arbeit Macht Frei.”

Here is a recent emotionally manipulative, removed-from-context, ahistorical piece of non-news from the BBC drumming 'THE Hollowco$t' into the minds of their readers.

Why do the BBC NEVER do any emotive, non-news stories of the other people who were arrested for having the wrong ethnicity during WW2 e.g. in Britain and America?

Yet everyone knows the name of a small town in Poland of a concentration camp were Jews were held amongst all the other prisoners.

Yet we are CONSTANTLY force-fed a weekly — sometimes daily — diet of 'holy-caust' stories.
Its both sick and disgraceful manipulation.


Letters of love: 'Our father wrote every day as he waited to be sent to Auschwitz'

Arrested by the Nazis for being a Jew, Daniele Israel spent months in jail in Trieste before being deported to Auschwitz. The letters he wrote to his wife as she hid with their two sons only recently came to light, writes Dany Mitzman, and paint a deeply moving portrait of a family shattered by the Holocaust...[Blah, blah, blah]

...Dario's knowledge of these events comes from rereading the letters, and talking to Vittorio. His own memories were almost completely wiped out as a result of a traumatic experience that occurred during the Allied bombing of Trieste in 1944. [Blah, blah, blah]

...At the end of the war, they heard that he had been seen alive two weeks before the camp was liberated. Dario says their mother searched for years, through the Red Cross and on her own, hoping he'd gone to Russia, or lost his memory. [Blah, blah, blah]

The letters crystallise the emotions that all Jews went through during World War Two, Elisabeth suggests. ...

...In Israel[/size], Anna, Dario and Vittorio settled in the Tel Aviv area.

I believe the reason why Jews who control the media want constant emotive, personal news stories of just Jewish experiences and suffering during WW2 because they believe it is normalising white European colonialist settler ethnic cleansing in Palestine. And because they believe it gains these racist 'Jew-only' settlers sympathy whilst they systematically murder and brutalise their non-Jewish neighbours in the Jewish occupied territories.

The lying trolls here never mention this, as they are only here to obfuscate discussion of the details exposing the false aspects of this enforced, ahistorical mythology.
"When people who are honestly mistaken learn the truth,
they either cease being mistaken
or they cease being honest"
-- Anonymous
Top

A survivor of the Holocaust has hit out at a trend on TikTok for people to pose as victims of the Nazis, calling it an ‘outrage’. Dr Martin Stern MBE, who was held in concentration camps at both Westerbork and Theresienstadt as a child, said the videos showed a lack of understanding. ‘I’m absolutely outraged,’ he told metro.co.uk. ‘This generation are being brought up self-satisfied in their ignorance and give huge offence.’ He was responding to people filming themselves pretending to be victims of the Holocaust.

Some of them dressed up in striped outfits, resembling the clothing Jews were made to wear in concentration camps, and they talk to the camera as though they are in heaven, looking back at how they died in the Nazi death camps. Dr Stern, 81, said: ‘If their families had been involved in what my families had been involved in, they would see the horror of it. People need to get themselves better informed.

Read more: https://metro.co.uk/2020/08/26/holocaus ... to=cbshare
"When people who are honestly mistaken learn the truth,
they either cease being mistaken
or they cease being honest"
-- Anonymous
Top
Post Reply
477 posts