Discuss the alleged Nazi genocide or other wartime atrocities without fear of censorship. No bullying of fellow posters is allowed at RODOH. If you can't be civil, please address the argument and not the participants. Do not use disparaging alterations of the user-names of other RODOH posters or their family members. Failure to heed warnings from Moderators will result in a 24 hour ban (or longer if necessary).
Post Reply
475 posts

Malmö is now favourite in the bidding to host Sweden's new national Holocaust museum, with the head of Stockholm's Jewish Museum giving the southern city her blessing.

Building a holyhoax museum in Malmo might be a little more problematic than the Jews anticipate. Do a search on, "malmo no go zone" and see what you get. The Muslims might not look too kindly on a Church of Jew Victims being built in "their" city. Perhaps if they keep it far enough away from the muzzies it can get by. At least for now.
Top

The Netherlands' state-run rail company NS has said it will pay tens of millions of euros in compensation to Holocaust victims and their families.

I understand that next month is holocaust month. I suppose that's why they call it Jew-lie.
Top

Jude is pronounced in English as You-da. That does not quite rhyme with your monthly appraisal of terms. July was named in honor of Julius Caesar the Emperor. Julius taught Jude to behave as did Tiberius at Metsada
In 66 CE, a group of Jewish rebels, the Sicarii, overcame the Roman garrison of Masada with the aid of a ruse. After the destruction of the Second Temple in 70 CE, additional members of the Sicarii fled Jerusalem and settled on the mountaintop after slaughtering the Roman garrison, According to Josephus, the Sicarii were an extremist Jewish splinter group antagonistic to a larger grouping of Jews referred to as the Zealots, who carried the main burden of the rebellion. Josephus said that the Sicarii raided nearby Jewish villages including Ein Gedi, where they massacred 700 women and children.
Seems Jude still need a spanking.

.
This is the latest b*llsh*t ‘news’ story that is everywhere and will probably get bigger with another b*llsh*t ‘show-trial’.

The persecution of another man in his last years, Karl Munter.

A former Nazi SS war criminal who has lived in freedom in Germany since the end of World War Two was charged on Wednesday under the country’s stringent laws against Holocaust denial and hate speech.

Karl Munter — still an unrepentant Nazi at the age of 96 — is being prosecuted for remarks he made to journalists from the German network ARD, in which he claimed that the figure of six million Jews murdered in the Nazi Holocaust was an exaggeration, at the same time justifying a notorious massacre of French civilians by the SS in which Munter himself was a participant.

Munter was charged by the public prosecutor in the north-west German state of Lower Saxony over comments he made to the journalists on camera that were broadcast in November 2018. The former SS man was filmed in secret after he struck up a conversation with an investigative team from ARD at a meeting of neo-Nazis.

Asked about the Holocaust, Munter disputed the figure of six million deaths, exclaiming, “But there weren’t that many Jews in our country!”

What disgusting deceit and hateful illogicality. This was a case of entrapment. If the views are so inciting why have them recorded on concealed cameras under-false pretences and then WHY BROADCAST THEM WORLDWIDE???

And then notice this deceit: everywhere he is reported as not believing and disputing the six million total of alleged deaths. But neither did Raul Hilberg believe that figure!!!! Society has become quite insane on this topic.

And then look at the actual sentences expressed and see if you can spot the holocaust denial and the deceit concerning the charge?

His remarks to a question on ‘THE Hollow-co$t’ pseudo-historical compulsory belief start at 8:08. Nowhere is there a mention of “six million”. Its a another mass-deception for a new generation to be manipulated and deceived with.

Unfortunately the video is in German without English subtitles.
Top

rollo the ganger wrote: ↑
Thu Jul 25, 2019 11:21 am
Unfortunately the video is in German without English subtitles.

Jawohl! Das ist richtig.
But what he says is written in German subtitles.

And after watching the whole thing I see that at 08:34 he actually did mention the six million number and said that it doesn't fit the facts.


That this number, six million, is not correct. 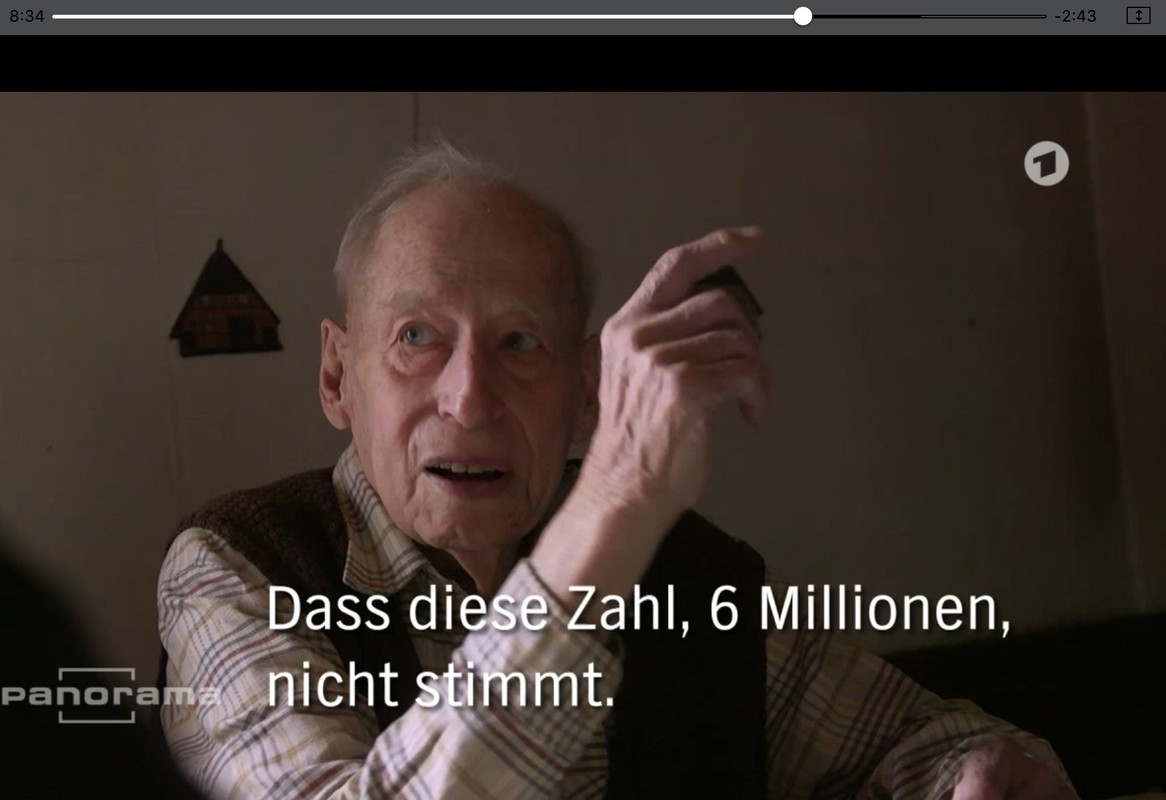 .
Karl was asked if he sometimes wished Adolf Hitler were back.

<“Why not? He has come through [all the lies].
And that with the Jews, what [of that] is connected to him?”>

<“Well, be careful with ‘millions’. So many Jews at that time did not exist with us. That has already been refuted.
I read somewhere recently that this number is not true at all.
It will all come out.
I do not believe all that anymore.”>
"When people who are honestly mistaken learn the truth,
they either cease being mistaken
or they cease being honest"
-- Anonymous
Top

Yup good joke but that demeans the memory of the great Julius Caesar. July was named in honor of Julius Caesar. When Julius Caesar died, Quintilis, which was his birth month, was renamed with July. Quintilis means “fifth month” in Latin, which represents where this month originally fell in the Roman calendar.

Under Julius Caesar, Judaism was officially recognised as a legal religion, a policy followed by the first Roman emperor, Augustus who was the first Emperor of the Roman Empire. According to Jeremiah 9.4 https://www.sefaria.org/Jeremiah.9.4?lang=he-en
There are stern injunctions throughout Jewish literature against cheating and dishonesty in business affairs and in other areas of life and are directed toward every Jew. Sadly when it comes to personal gain many Jude fail to heed the Talmud but like Christians with the bible cherry pick the points that suit them.

Edwin Schuker was born in Iraq and returned in 1951 from the UK to reconnect with the past. He say that like gamblers, he says, the Jews overplayed their hand. In 1971 he and his family were fortunate to escape from Saddam Hussein’s regime with their lives. https://rememberbaghdad.com/contributors.

According to The Time of Israel Edwin Black "From the moment Hitler took power in 1933, Iraq had distinguished itself throughout the Arab world as a top Nazi ally."
Hundreds of Jews were cut down by sword and rifle, some decapitated. Babies were sliced in half and thrown into the Tigris river. Girls were raped in front of their parents. Parents were mercilessly killed in front of their children. Hundreds of Jewish homes and businesses were looted, then burned.
This is the real cause of the Iraq war and the false claims of weapons of mass destruction. More gross exaggerations from Jude who were kicked out of another country.