from the APPENDIX to:

" Increased Use of Hydrocyanic Acid Delousing Chambers "
by Emil Wüstinger,
engineer Frankfurt am Main
(Paper given at the Hydrocyanic Acid Conference of the Labor Committee for Room Disinfestation and Contagious Disease Prevention of January 27/28, 1944.)

translated by F.P. Berg and E. Kniepkamp from:

In delousing chambers, for reasons which are easily understood because of their special function, one expects maximum performance with minimum gas concentration and penetration time. A penetration period of only one hour should have the same effect as a 16-, 20-, or 24-hour period during a room disinfestation. This is demanded because of the pressing need to process massive quantities.

Such requirements can only be met successfully, even with the highly effective hydrocyanic acid, when all of the conditions for fumigation are ideal, in other words when the following conditions exist: quickest possible release and distribution of the gas, sufficient airtightness of the room, good room temperature and proper arrangement of the articles to be fumigated within the chamber. On the basis of its collected experiences with its own fumigation chambers, the German Company for Pest Control, G.m.b.H. [DEGESCH] had already developed years ago special vaporizers (Vergasergeräte) and circulatory systems (Kreislaufanordnungen) which take into consideration all the requisites: fastest gas generation, best gas penetration and sufficient heating with simultaneous improvement in the ventilation piping.

After the first year of the war, during which a string of hydrocyanic acid facilities had been built in several regions and equipped with DEGESCH circulatory systems for Zyklon hydrocyanic acid [Zyklon-Blausäure or, as it is generally abbreviated, Zyklon-B] [fn26], some of which have already been used to delouse hundreds of thousands of pieces of clothing, there arose a significant increase in demand as even government bodies and industrial factories began to take stringent measures to control lice.

The motivation for the increased use of hydrocyanic acid delousing chambers arose primarily from an official government requirement that the large numbers of foreign workers who were being used had to be deloused periodically at prescribed intervals and, therefore, the factories which employed the largest numbers of foreign workers had to build their own delousing facilities. 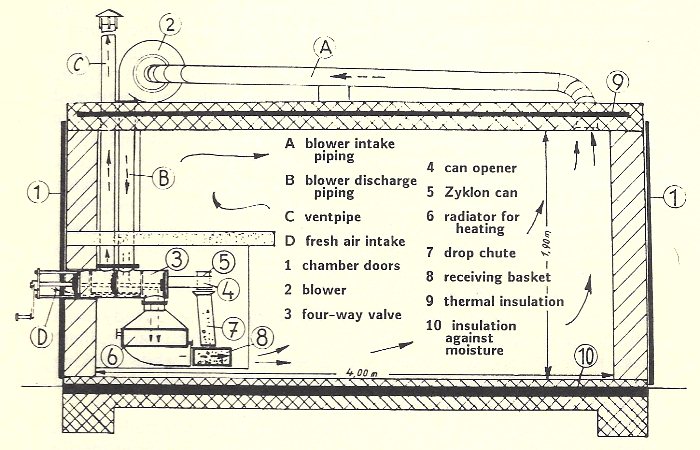 This requirement was expanded by the official camp regulation from the Reich Minister of Labor which came into effect in the summer of 1943 regarding camp accommodations for workers for the duration of the war. Article 9 stipulates: "All rooms must be cleaned daily. The rooms and their inhabitants must be regularly examined for instances of vermin. Proper installations for the extermination of vermin must be available" [emphasis added].

Recently there have even been an increasing number of instances where hot air chambers were rebuilt in order to be adapted with hydrocyanic acid circulatory systems. Many other large disinfestation facilities in which only hot air has been used until now are being expanded with hydrocyanic acid chambers in order to fumigate equipment and clothing which could easily be damaged in hot-air chambers – for example, fur and leather goods.

For the entire war until now, at 226 different sites, a total of 552 chambers with hydrocyanic acid circulatory fumigation systems and an additional 100 or so chambers without such equipment, but using hydrocyanic acid nonetheless, are either completed or under construction almost exclusively for the purpose of delousing. 300 of these chambers at 131 different facilities have been completed or are still under construction just since January of the past year alone. Almost one-fourth of these, i.e., 131 chambers, are distributed among government and administrative district labor offices, especially in the Alpine and Danube countries, as well as among city administrations and health departments. 249 hydrocyanic acid delousing chambers are either completed or under construction for the armaments industry.

And so, it becomes ever more apparent that the generally incorrect reservations which had been previously held against the use of highly toxic gases in delousing chambers have been thoroughly dispelled [emphases added]. This is illustrated by the fact that in just the last year alone as much hydrocyanic acid has been expended exclusively for the disinfestation of articles in delousing chambers as had been used in all of Germany for large area disinfestations in 1939. During the war the clothing and equipment of approximately 25 million people have already been fumigated with hydrocyanic acid [emphasis added]. Fortunately, there have been no reported accidents of a serious nature while working with Zyklon hydrocyanic acid [Zyklon-Blausäure] in the chambers equipped with circulatory systems.

Facilities employing circulatory systems are now being built so that they are suitable not just for the use of hydrocyanic acid but primarily for other evaporable liquids as well. Fortunately, these changes can be achieved without extensive modifications in the apparatus so that there is no increase in the already difficult procurement problems; although the DEGESCH circulatory systems could be delivered with relative ease during the first years of the war and, most important of all, could be delivered on short notice, increasing demands have also led to more and more procurement problems because of the fact that the increasing demands have to be surmounted by an ever decreasing number of workers. One should note at this point that hydrocyanic acid delousing chambers have the advantage over hot air chambers of reduced construction costs and, most important of all, require less iron and metal. Consequently, far fewer man-hours are needed for fabrication and so it should not be too surprising that the hydrocyanic acid chamber equipment which has already been installed has been built despite great difficulties by only a few companies with only a small number of workers. Of the manufacturers, one is specialized in the delivery of the blowers, air heaters, and piping and even installs the equipment. The other supplier manufactures the special appliance, the so-called four-way valve with a built-in can opener, which is the centerpiece of the entire system. This second factory usually had only two or three skilled workers available for these tasks who were not at all times capable of working because of physical disabilities.

Thanks to the many delousing facilities which are already in operation and to the other stringent preventive measures, it has been possible, fortunately, to reduce dramatically the number of cases of typhus and the mortality in stark contrast to the earlier years. Nonetheless, a great many new facilities with fumigation chambers will be necessary just for delousing because the use of foreign workers and the crowding of these workers into common barracks is still increasing and, especially in the East, the number of hydrocyanic acid delousing chambers that are available is still far from sufficient.

The increasingly widespread, harmless application of hydrocyanic acid, in itself highly toxic, in delousing chambers equipped with DEGESCH circulatory systems is a good indication of the dependability of this method, which is generally regarded as one of the most effective delousing methods. This is also spelled out in a decree from the Reich Minister of the Interior.

[fn26] [Some readers may object to the claim that Zyklon-B was an abbreviation for Zyklon-Blausäure. Although the "B" may have originally been intended merely to reflect a sequential numbering of another "Zyklon" product since there had been a Zyklon-A until about 1920 and even a Zyklon-C for a brief period, by at least the beginning of World War II the German literature used the terms "Zyklon," "Zyklon-B" and "Zyklon-Blausäure" interchangeably. The longest form was used least often and generally only at the beginning of a piece of text in order to identify clearly the principle ingredient. The fact that Zyklon-B and Zyklon-Blausäure are synonymous is also shown by the fact that in German both terms are almost always hyphenated. ~ F.P. Berg]