The RODOH Lounge is a place for general discussion, preferably non-Holocaust. The Lounge is only lightly moderated but please keep this a friendly place to chat with and get to know your fellow board participants.
Post Reply
418 posts


[There are] countless fools, blinded by ignorance.
Countless thieves and cheaters.
Countless are those who impose their will by force.
Countless cut-throats and ruthless killers.
Countless sinners who keep on sinning.
Countless liars, wandering lost in their lies.
Countless wretches, eating filth as their ration.
Countless slanderers, carrying the weight of their stupid mistakes on their heads.
-- Nanak. Jap ji. pauri 18

...which seems to show that people and human nature don't change.
Top

Here is a rather curious quote from a true believer called "Oozy_substance" on the Skeptic forum:

I am actually intrigued about body disposal in Treblinka and the other Reinhard(t !) camps.
I think it was already discussed on this board, but my memory is vague about it.
Was there a discussion about it here?

It would seem that true believers actually have little to no interest in how the holyhoax was actually accomplished. How can they simply accept the events known as the holyhoax as a fait accompli without a rigorous examination to see if what is claimed was actually possible? I am baffled by such determined ignorance.
Top 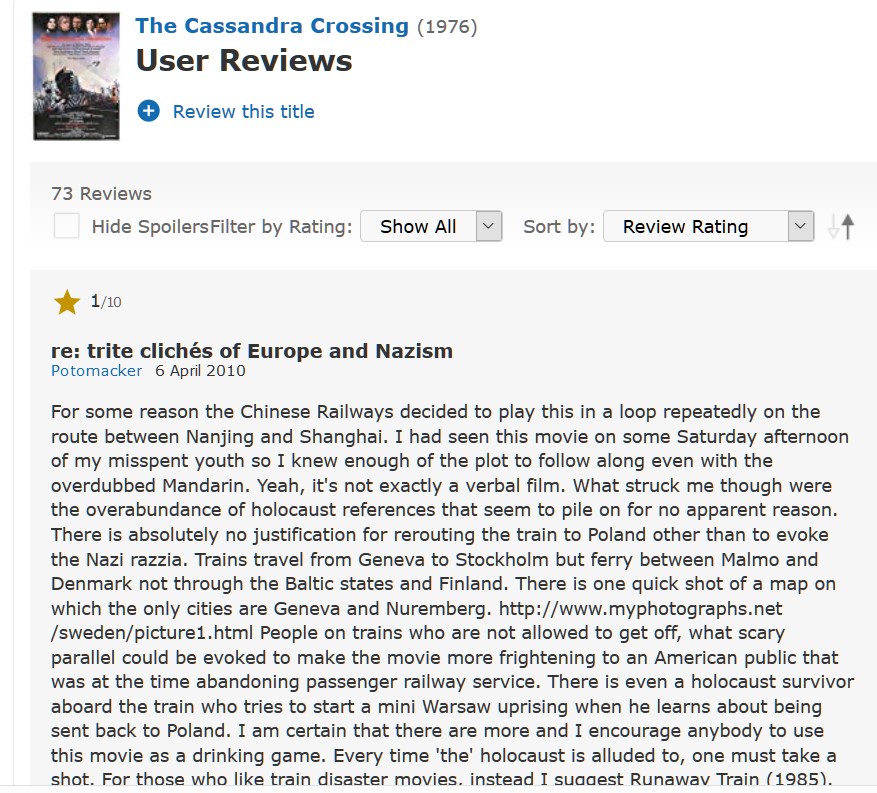 Will Yakowicz wrote:
The day before I left New York for Moscow, I bumped into
Norman Finkelstein, a scholar and Holocaust-doubter
who was denied tenure at DePaul University because
of his published work, The Holocaust Industry...

Will Yakowicz describes the JEWISH son of TWO Jewish parents — who are BOTH considered to be 'holocaust survivors' — as a “Holocaust-doubter”!!!!!

What part of the enforced, quasi-religious pseudo-history is he supposed to be "doubting"???

It's psychotic, I'm tellin' ya.
Top

Has Finkelstein changed his mind since the Iranian Holocaust Conference? When he did this program with Michele Renouf he took offense at those who says the holohoax didn't happen. https://www.youtube.com/watch?v=ePWuiEiZtz0
Top

Daniel wrote: ↑
Wed Mar 18, 2020 3:26 pm
Has Finkelstein changed his mind since the Iranian Holocaust Conference? When he did this program with Michele Renouf he took offense at those who says the holohoax didn't happen. https://www.youtube.com/watch?v=ePWuiEiZtz0

No, as far as I am aware he has NOT changed his mind. On the contrary.

Which is precisely why Will Yakowisc calling him a 'holocaust doubter' is absurd nonsense.

Which is why I posted this quote.

It demonstrates that all these ad hominem attacks — against ANYONE who negatively assesses, criticises and/or effectively exposes and embarrasses the people who are responsible for protecting and perpetuating this pseudo-historical narrative — it demonstrates that these personal attacks are not sincere, nor honest nor logically sustainable.

As for this exchange between Renouf and Finkelstein that you linked to, I had not seen/heard it before.

So regarding Prof. Finkelstein's question about his missing relatives, I feel Lady Renouf fell into a semantic trap. Because who is saying 'the holocaust' "never happened"? No-one knowledgeable denies persecution, nor massacres, nor incarceration in camps of Jews during WW2. She should have pointed that out before quibbling rather stupidly over exact numbers of deaths.
We FIRST need to agree our terminology and their definitions BEFORE we can have any meaningful debate. What exactly is 'the holocaust'? THEN ONLY WE CAN DISCUSS what parts of it “happened” or not.

And as for Lady Michelle Renouf's other answers, I feel she did the pursuit of truth no favours when she suggested that Finkelstein's parents' relatives were hiding in Israel under altered names. That was an insulting, stupid, inconsiderate/unkind reply in my opinion.
Also her suggestion that Raul Hilberg represented a "Hollywood version" of history was also an own goal, that showed her to be ill-informed and insultingly ignorant. Which is a shame, as this undermined the credibility of many of her other intelligent and irrefutable points.
"When people who are honestly mistaken learn the truth,
they either cease being mistaken
or they cease being honest"
-- Anonymous
Top

I agree concerning your criticisms with Renouf's performance. It was very lazy. Which surprised me, as when I've seen her elsewhere she's been pretty sharp.
Top

I snipped this from StormFront years back, as I too am leery of Jews (even those claim to have converted to Christianity) getting involved in revisionism.

Daniel wrote: ↑
Sat Mar 21, 2020 10:49 pm
I snipped this from StormFront years back, as I too am leery of Jews (even those claim to have converted to Christianity) getting involved in revisionism.

"Kapner"? As in "Brother Nathaniel"?
Top

Yes the quote is about Kapner.

Perhaps I'm being too cynical, but it seems to me that Jewish people involving themselves in revisionism is for the purpose of making revisionism into something impotent, so it won't pose a threat to Jewry.

I do agree with the Stormfront writer. A gentile will risk his livelihood, marriage, friendships, and personal safety to say things that Jews don't want said. Jews are the reason the taboo is in place (and holohoax "denial" is only one of many Jewish-fashioned taboos), and this people is the reason a gentile might come to harm for questioning that taboo.

Then after some years some enterprising Jew will come along and say all the same things, but pass these observations off as his own and reap the benefits. I have zero respect for Ron Unz, Israel Shamir, Steve Sailer, Gilad Atzmon, and the fake convert Kapner. Their "tell" is that none of them are anti-Jewish, including the crypto Kapner -- who tries his best for it to appear otherwise. Their job is to keep the discourse about the holohoax in the hands of Jews. It's similar to all these pro-Palestinian groups run by Jews or the NAACP, which was created by Jews and every chairman was Jewish until the mid-70s. Or obvious crypto-Jews like Andrew Anglin. Jared Taylor's wife is a Jewess who worked for the ADL in the 1980s investigating white nationalist groups.
Top
Post Reply
418 posts