Here below is one of many examples of the myth that has been accepted as factually accurate by the majority of people the world over, from the time of Picasso's painting to the present moment:

Probably Picasso's most famous work, Guernica is certainly his most powerful political statement, painted as an immediate reaction to the Nazi's devastating casual bombing practice on the Basque town of Guernica during Spanish Civil War.

Guernica shows the tragedies of war and the suffering it inflicts upon individuals, particularly innocent civilians. This work has gained a monumental status, becoming a perpetual reminder of the tragedies of war, an anti-war symbol, and an embodiment of peace. On completion Guernica was displayed around the world in a brief tour, becoming famous and widely acclaimed. This tour helped bring the Spanish Civil War to the world's attention.
https://www.pablopicasso.org/guernica.jsp 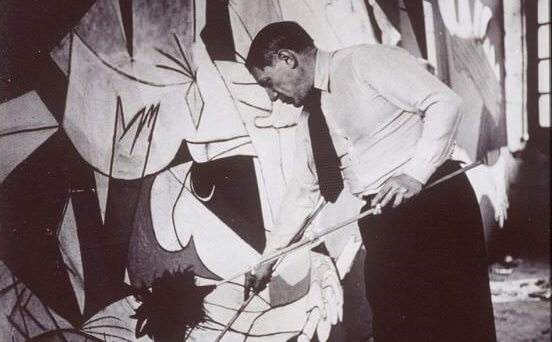 The above example reiterates the myth of “Nazi devastating casual bombing practice”, when in reality the deliberate carpet bombing of civilian cities to mass-murder and terrorise non-combatants was an Allied crime of WW2 reaching its monstrous and barbarous cruelty and destructiveness in the genuine wartime 'holocausts' of Dresden, Hiroshima and Nagasaki.

As an example of widely accepted atrocity propaganda, it should be seen as a potent symbol of the extent that wartime lies and anti-German misinformation have been naively accepted by the vast majority of people worldwide. Lies and mythology which are still repeated uncritically by gullible new generations, who are blind to the hypocrisy of English speaking heirs of the genuine Allied mass-murder of hundreds of thousands by aerial bombing repeating lies about a bombing raid that killed about one thousand people. 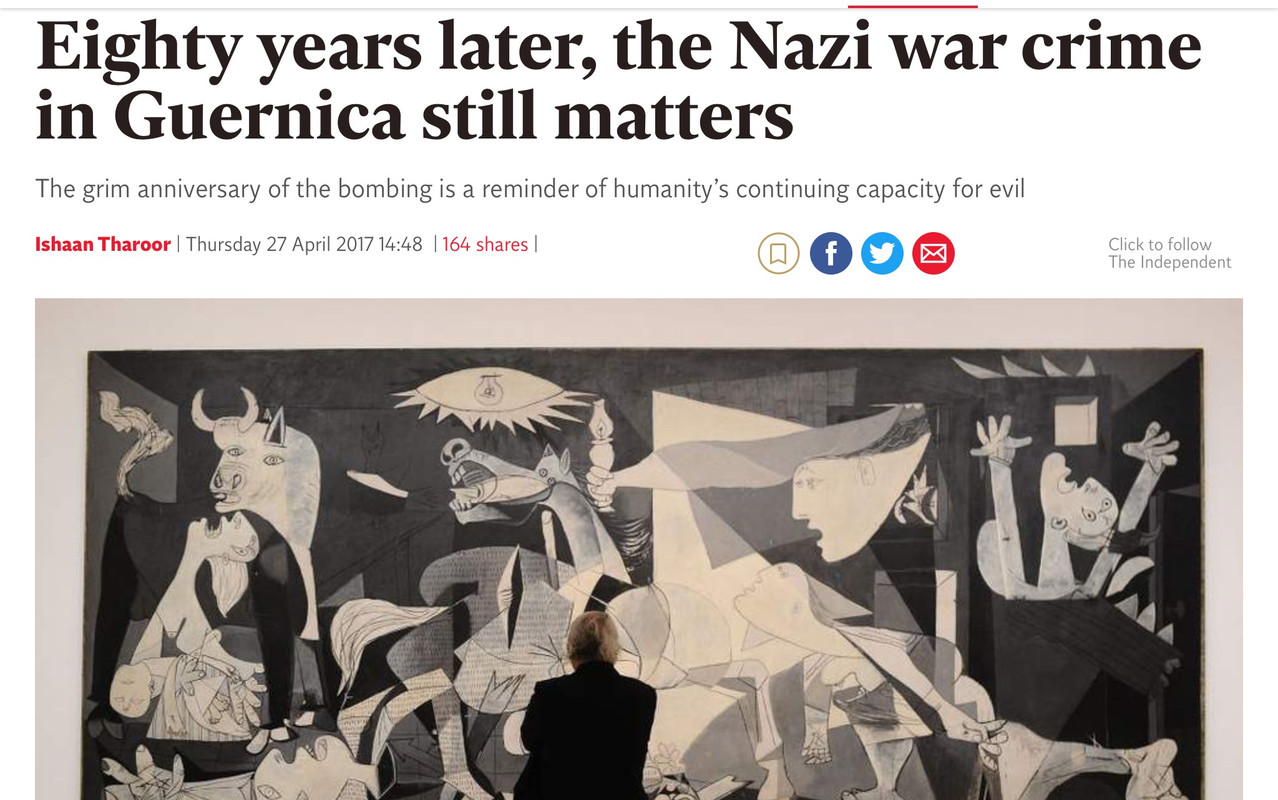 If you do a search for images of "Guernica bombing" a photograph comes up high in the search from a website by people describing themselves as"adolescents" which includes an emotionally powerful image of destroyed buildings with human corpses. Only problem with that is that the photograph actually shows the aftermath of the British and American mass-murder at Dresden. A fitting symbol of the "casual" deceit and hypocrisy of new generations, who blindly and naively repeat the WW2 lies of their parent's and grandparents' generations.
. . . . . .


ON APRIL 26, 1937 a handful of planes of the "Condor Legion" carried out sporadic air attacks on the Basque town of Guernica, to deny an important river crossing to the retreating Republican (Communist) forces of the Spanish government. Ninety-eight people died.

The Condor Legion was a squadron of airforce "volunteers" provided by Hitler's Luftwaffe to the insurgents fighting under General Francisco Franco.

The air raid on Guernica became a centerpiece of communist and Left-wing propaganda against Hitler and Mussolini that has since become enshrined as historical truth. It is correct that reporters later found the town center devastated, but by whom? By the bombs, or after the raid by withdrawing Communists armed with dynamite by the regions' miners?

Reporting on a visit to Guernica, The Times Military Correspondent stated on May 5, 1937:

"That Guernica after a week's bombardment by aircraft and artillery should not have shown signs of fire supports the Nationalist contention that aircraft were not responsible for the burning of this town, which was bombed intermittently for a period of two hours. In Guernica few fragments of bombs have been recovered, the façades of buildings still standing are unmarked, and the few craters I inspected were larger than anything hitherto made by a bomb in Spain. From their position it is a fair inference that these craters were caused by exploding mines which were unscientifically laid to cut roads."

A further unidentified source echoed this:

"What actually happened was that industrial Basques, miners from Asturias, experts in explosives, fired and dynamited the town to a prearranged plan. Two French artillery officers, veterans of World War One inspected the town when Franco's troops entered. What they saw was, they said, largely the result of arson and incendiarism. Petrol had been largely used, plus dynamite. Each alleged 'bomb' crater coincided with a sewer-manhole on the street, and where there had been no sewers there had been no 'bombs.'"

And Sir Arnold Wilson, Conservative Member of Parliament for Hitchin, Hertfordshire, wrote to The Observer after a visit to Guernica, on October 3, 1937:

There was no evidence of damage from aerial bombardment. Most if not all of the damage was caused by wilful incendiarism and such is the verdict of the inhabitants."

Sir Arnold was convinced that Guernica was a "put-up job," a Red atrocity-story calculated to recoil on Franco and the Germans.

Thousands were said to have been killed by the bombs. [See e.g., Storia Illustrata, Italy, Oct 1966: "1,654 died, 889 injured"]. This version of history — no surprises here — has been uncritically adopted ever since by conformist historians who carried out no original research. The Spanish artist Pablo Picasso commemorated the raid in a famous propaganda painting titled "Guernica". It is on display in the United Nations building, and the original and sketches are displayed in a gallery in Madrid. Closer examination reveals the Picasso painting to be a surrealist depiction of a bullfight; his first sketches for it are found in notebooks dating back over one year before the raid.

How many did actually die in Guernica?
The conformists' narrative of events is open to question, as British historian David Irving found when he visited the town thirty years after the raid, researching for his book Guernica to Vietnam; he spoke with survivors and city officials, and checked local newspaper files [April 27th, 28th, 29th] and cemetery records.

In 1987 he wrote a letter to The Daily Telegraph briefly reporting what he had found.
In brief, the local registry of births and deaths lists fewer than one hundred deaths from the air raid (most of them killed in one incident in a shelter in a local asylum, the Hospital-Asilo Calzada); bad enough. It will serve to put things in perspective if we show that the local Communist newspaper Euzkadi Roja, publishing a report on the raid on April 28, 1937, included a list of names of those few injured in the attack.

We would not have expected such a list to appear in the press after the later raids on London, Tokyo, or Dresden; in the two-week Israeli offensive in Gaza in January 2008, 40,000 Palestinians were injured and 1,300 killed.

Mr. Irving, I recall this was discussed by Luis Bolin in his memoir of the Spanish Civil War, Spain: the vital years. He was the pilot who flew General Franco to Spain at the start of the war. His account supports the position you are defending.

Notes from an Interview with the Mayor (Alcalde) of Guernica, [Augusto Unceta Azpiri] at his office in Guernica, Spain, on 11 May 1967.

THE bombardment of Guernica started at about 4 p.m. on 26th April 1937. Most of the bombs were incendiaries. The aircraft came from Victoria, crossing the mountain called Orz. The bells were rung as a warning, and they rang again before the bombs dropped, and the siren on the Arms Factory sounded. The bombs were dropped from about 4 to about 7.30 p.m. The aircraft were Junkers, about twenty in number. They came over three at a time. A hundred people were killed as a result.

The 26th of April 1937 was a market day, but as people had some pre-sentiment about what was going to happen there was little market activity that day. The Nationalist aircraft were firing with machine guns. The fires in the town started at 7.30 p.m. and lasted two days. Everything was destroyed except la Casa de Juntas, the school and several other houses round that way. In the Hospital 33 died as a result of only one bomb. One part of it was destroyed. Everybody left immediately to the small villages called aldeas or to Bilbao. Some people came back after four days and saw the dead people still in a shelter (refugio): this had been built in a narrow road of pine logs and sandbags (sacs de terreros). Twenty people died in it. They were buried ten or fifteen days later

The people just had no means of defence. The village was 90% destroyed. As a result of one bomb dropped there was a crater seven or eight metres in diameter (an H.E. bomb).

There is no proof that people who lived in the village set fire to the manholes or put bombs in them, after the raid. But one eye-witness who is now Chief of the Archives saw a man spraying some kind of liquid on the ground, and he thought that man might have been starting fires with it. The eye-witness concerned is Sr. Sesmero.

There were 4,000 inhabitants in Guernica at the time. The Communists had wanted to blow up the bridge of Renteria, giving access to Guernica. They dropped three explosive bombs, of which one hit.

Renteria and the other on the spot where the Traffic Police were. There were nine planes, Junkers 52. Guernica was a military objective.

[The Chief of Archives of Guernica, Sr Sesmero, told me that he saw someone from the town set fire to mines after the bombardment but he was not sure who it was, or whether that caused the explosion.]
____________
The above was written by Maria Pilar Irving.
"When people who are honestly mistaken learn the truth,
they either cease being mistaken
or they cease being honest"
-- Anonymous
Top