Discuss the alleged Nazi genocide or other wartime atrocities without fear of censorship. No bullying of fellow posters is allowed at RODOH. If you can't be civil, please address the argument and not the participants. Do not use disparaging alterations of the user-names of other RODOH posters or their family members. Failure to heed warnings from Moderators will result in a 24 hour ban (or longer if necessary).
Post Reply
2 posts • Page 1 of 1 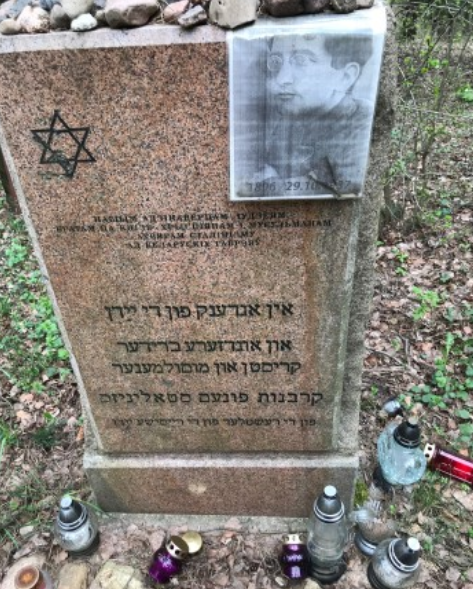 Курапаты, is a wooded area on the outskirts of Minsk, Belarus, in which a vast number of people were executed between 1937 and 1941 during the Great Purge by the Soviet secret police, the NKVD.
Zianon Pazniak a Belarusian politician in “Litaratura i mastactva” has written a quarter of a million people were murdered here. This is confirmed by Zdzisław Julian Winnicki (Polish historian and professor of University of Wrocław); British historian Norman Davies has the deaths as being considerably higher.

The Soviet, and Belarusian governments, which have been conclusive as to the perpetrators who are the Soviet NKVD. This is based on former NKVD members confession and the eyewitness testimonies of 55 villagers, from villages such as Cna, Cna-Yodkava, Drazdova, Padbaloccie and others, that gave evidence that NKVD brought people in trucks and executed them during 1937 – 1941.

On October 29, 2004, the Jüdische community of Belarus installed a monument in memory of juden and other nationals who were murdered in Kurapaty forest.

No documents and materials were found in the archives of Ministry of Justice, KGB, Ministry of Interior Affairs and the Prosecutor’s Office in BSSR. In 1994, a so-called civil commission of investigation on mass crimes in Kurapaty asked the Presidential administration to carry out a new investigation. According to this commission, the perpetrators were German officers and the victims were mostly European Jews; this smacks of the Katyn cover up attempt.. Foreign brands on clothes suggests that a good number of these juden were from Poland. The artefacts found includes: spectacles, pencils, Catholic Medallions with the image of the Madonna, high-quality factory-made footwear, a relatively high number of metal dental crowns, dental prostheses, leather clothing, etc. (Kurapaty, 1994: 128). These people had travelled a considerable distance. During the 1988 investigation, the commission heard testimony from 55 witnesses, which led them to deduce that the executions had taken place from 1937 until summer 1941; this coincides with the Korherr calculations from 1937 to December 1942.

Винница
The Vinnytsia massacre was a mass execution of between 9,000 and 11,000 people in the Ukrainian town of Vinnytsia by the Soviet secret police NKVD during the Great Purge or Yezhovshchina in 1937–1938. Mass graves in Vinnytsia were discovered during Germany's occupation of Ukraine in 1943.
Most of the victims buried at Vinnytsia were killed using a .22 calibre bullet fired into the back of the neck. Due to the small calibre of the bullet, most victims were shot twice, and at least 78 of them were shot three times; 395 of the victims found there had their skulls broken in addition to traces of gunshot trauma. Almost all men whose remains were excavated had their hands tied. Older women were dressed in some form of clothing, whereas younger victims were buried naked.

The executions were clandestine; the families were not informed of their relatives' fate. Personal belongings, documents and trial documentation were not preserved and instead were buried in a separate pit not far from the mass graves.
After a preliminary investigation conducted by Professor Schrader's team, two teams of medical examiners were invited — one international and the other made up of 13 experts from universities in Nazi Germany. An international commission of experts in anatomy and forensic pathology was invited from 11 countries in Europe, predominantly from Germany's allied or occupied states. The experts were the following:
In 1939 33,150 Jews lived in Vinnitsa, where they comprised 35.6 percent of the total population. After the start of the German invasion into Poland on September 1, 1939 many jüdisch refugees from Poland fled to the city.
The international commission visited the mass graves between July 13 and July 15, 1943.

According to Yad Vashem the majority of Vinnitsa's about 15,000 Js were murdered in two large-scale murder operations, in mid-September 1941 and in mid-April 1942; they of course blamed the Reich however, mass graves in Vinnytsia were discovered during Germany's occupation of Ukraine in 1943.

The Germans would hardly murder thousands of people and then report it to an international commission. The method of execution points entirely to the NKVD, though the use of .22 calibre rounds in the shootings is a surprise.

This was the area also occupied by Einsatzgruppe C who cleared the area of partizani.